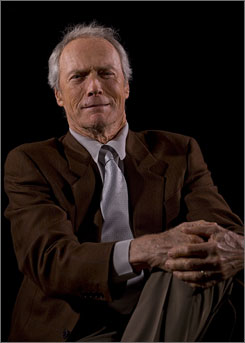 USA Today’s Anthony Breznican caught up with Clint Eastwood and Angelina Jolie at the NYFF where Changeling was screening. Eastwood says it wasn’t his strategy to place Gran Torino square in the middle of the Oscar race but the studio’s. He does talk a bit about the character he plays:

“I’m a weirdo in it. I play a real racist. ‚Ä¶ It’s a great time in life (to do that) because, you know, what can they do to you once you’re past 70? There’s nothing they can do. But it also has redemption. This Hmong family moves in next door, and he has been in the Korean War, in the infantry, and looks down on Asian people and lumps everybody together. But finally they befriend him in his time of need because he has no relationship with his family.”

It will be interesting to see how this plays with Oscar voters and audiences in general. Really, this is such a pivotal year politically and America hasn’t been this divided since Kennedy and Nixon went at it. How the election plays out will impact how we see many of the Oscar films – which ones will resonate will depend on who is elected. Gran Torino feels political to me and it feels very current to the state of things. We shall see.

Dear Zachary: A Letter to a Son About His Father