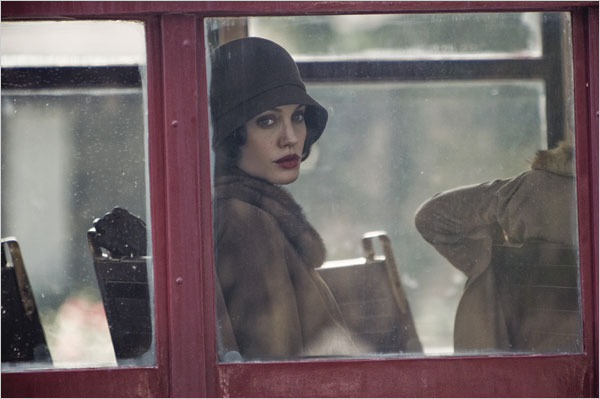 The NY Times’ Scott on Changeling:

Toward the end of Clint Eastwood‚Äôs ‚ÄúChangeling,‚Äù in what is perhaps the only lighthearted scene in this rigorously somber film, Christine Collins, the heroine, is invited by some of her phone company co-workers, and then by her boss, to go out on the town and listen to the Academy Awards radio broadcast. The year is 1935, and ‚ÄúIt Happened One Night‚Äù is Christine‚Äôs pick for best picture, but it‚Äôs hard to avoid interpreting this moment as a none-too-subtle wink directed at present-day moviegoers and Academy voters. Christine begs off ‚Äî she just has too much work ‚Äî and it goes without saying that on Feb. 22, Angelina Jolie, who plays her, will have to make similar excuses. She won‚Äôt be watching the Oscars with the likes of us; we‚Äôll be watching her.

That seems to be the plan behind ‚ÄúChangeling,‚Äù at any rate, an ambition telegraphed a shade too blatantly in the many close-ups of Ms. Jolie‚Äôs extraordinary face, which is by turns tear-streaked, stoical, crestfallen and howling. To watch her trace Christine‚Äôs harrowing emotional passage ‚Äî a series of flights from anxiety to terror, from grief to rage, pausing occasionally at calm defiance or tremulous hope ‚Äî is to witness an undeniable tour de force of screen acting. It insists on being regarded as a great performance and may, indeed, be mistaken for one.

Mistaken, of course, if you are a stupid Academy voter or, god forbid, a regular person because without Scott’s keen insights and lofty gaze. You know, it gets tiring to listen to critics complain about what they see as actors making a play for Oscar. Eastwood has lots of Oscars and Angelina has one — they aren’t out there pushing for it. Why would they?¬† At any rate, the film has been mostly trashed by the critics – 48% on Rotten Tomatoes; Slightly better with 65% on Metacritic – but is it enough?

The LA Times’ Kenneth Turan gave it a good review, though he stops short of really praising Jolie’s performance, focusing it more on cinematographer Tom Stern and Eastwood:

As these cases develop, helped by strong performances by little-seen actors like Jason Butler Harner, they form a relentless pincers movement whose prongs move forward with an awful fatalism. In other hands, these clashes of good and evil might have seemed ordinary, but Eastwood makes “Changeling” a hard story to shake off. To see this film is to understand both how fragile and how essential our hopes for decency and truth are in a world that must be made to care about either one.

The Oscar Eye Has Dark Knight at Number One