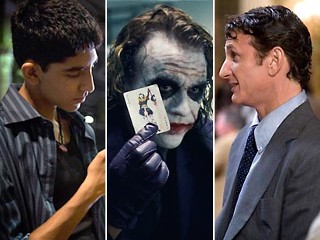 Sometimes what matters most is the broader view of the Oscar race, not just the inside our windowless room. ABC News has, to that effect, dubbed the “Top Ten Movies Scoring Oscar Buzz.” Right at the top:

After Milk it starts to get interesting, or perhaps odd. Revolutionary Road is left off their list, despite being revived in a fairly major way with the Globes noms. It’s always worth some of one’s attention to see what people who don’t read the internet will be seeing. And through that a general consensus begins to emerge.

ABC must get into the Oscar hyping game early to ensure maximum eyeballs, which perhaps explains why they dangled The Dark Knight out there early, as if to say, “see you huddled masses, one of YOUR movies will be represented too! It won’t just be dark, depressing films that only play art houses in major cities for limited engagements. Cross over children. All are welcome, all are welcome.

Heath Ledger’s final, chilling performance as the Joker has had critics talking for months; it would only be natural for him to pick up a posthumous nomination — he’s already nominated for a best supporting actor Golden Globe. “The Dark Knight” also stands to score Oscar recognition for its makeup and musical score.