Acting Stands out in Rev Road 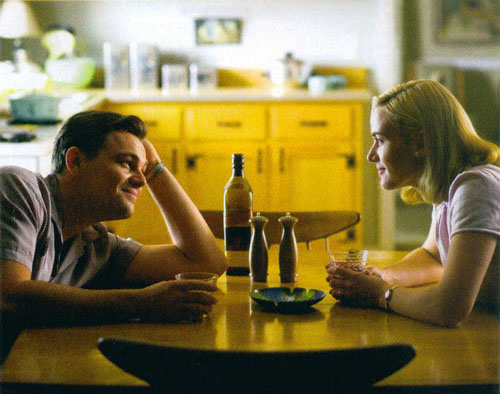 Kenneth Turan, giving a mixed review to Revolutionary Road, nonetheless had this to say about Winslet and DiCaprio:

Only a stone, frankly, would not be captured by the honesty and intensity of Winslet’s performance, by the breathtaking way she throws herself into this lacerating emotional maelstrom. News reports indicate that the actress’ passion for the script was key in getting the film made and in interesting Mendes, her real-life husband and the director of “American Beauty,” and her instincts were impeccable.

DiCaprio’s performance is a bit slower getting going. But his acting is brought into sharper focus once developments at Knox Business Machines make him question whether he can go along with the plans he and April have so carefully made, and the pressures on him mount as he attempts to decide how he should act, and we see the extent to which he is palpably torn.

And Village Voice’s Scott Foundas writes (in another mixed review):

As Winslet has already demonstrated once this season (in The Reader), among her seemingly boundless gifts is an acute grasp of bright young women beset by some intractable inner torment. DiCaprio, meanwhile, plays Frank with the faintly emasculated authority of so many outgoing, well-bred young men who still haunt the corridors of corporate America. But the movie’s one stroke of real genius arrives in the form of the tall, jittery character actor Michael Shannon, who shows up for two scenes as the paranoid schizophrenic son of the Wheelers’ matronly real estate agent (Kathy Bates). Brought to meet Frank and April as part of his attempted re-entry into society, he recognizes the unhappy couple as some kind of fellow travelers, and Yates (who himself spent time in various “bughouses”) imparts to him the story’s most resonant observation: “Plenty of people are on to the emptiness, but it takes real guts to see the hopelessness.”

Rolling Stone’s Pete Travers gives it a good review and of Winslet writes:

And the glorious Winslet defines what makes an actress great, blazing commitment to a character and the range to make every nuance felt. Winslet’s last scene, as April prepares breakfast for a husband who can’t see the torment behind her smile, is emotionally devastating. This movie takes a piece out of you.