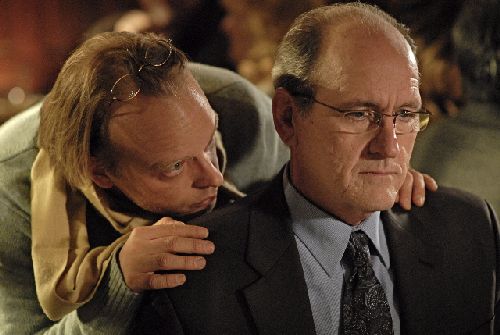 David Poland’s latest column looks at Slumdog, which is the favorite to win Best Picture right now, and how it’s faring at the box office:

Slumdog Millionaire got to $20 million on Monday. They are still on 614 screens. Searchlight has slowly rolled out into the places where a foreign language film with no stars is a problem. Some have worked. Some less so. But that $20 million mark puts them behind only Benjamin Button at the box office as the voters settle in. And they will surely use the Oscar nom to expand to a real wide release‚Ä¶ just as they did with Sideways. But they are already wider than Sideways was pre-nom‚Ä¶ and way ahead at the box office. The hope, I suspect, is that they will be over $30 million when the nominations come in and then expand and ride the wave to the second $100 million domestic film of Searchlight‚Äôs history‚Ä¶ and the first Oscar win.

Movie City News’ Kim Voynar also takes a look at Oscar and gets a case of the “shoulds,” who should be nominated and who shouldn’t. Eddie Marsan from Happy-Go-Lucky, George Clooney in Burn After Reading, and she makes a big play for some Defiance love, especially with the actors:

Lastly in the Best Supporting Actor category, there’s another strong supporting male performance that’s being greatly overlooked as we head closer to Oscar: Liev Schreiber‘s excellent turn as Zus Bielski opposite Daniel Craig as Zus’s older brother, Tuvia, in Ed Zwick‘s Defiance. Schreiber has been tearing up the stage for years now, taking home a Tony award in the revival of David Mamet‘s Glengarry Glen Ross, but he’s not found an on-screen role big enough for all that talent — until the role of Zus.

More after the cut.

All Schreiber’s fiery passion and considerable talent are poured into this role, and he’s the perfect foil to Craig’s Tuvia. The real-life paths the brothers took provides a great dramatic structure for the film: Where Tuvia opts to fight the Germans by saving as many Jews as possible through armed resistance, Zus chooses to abandon the Bielski partisans for a, while to go join the Russian army and kill as many Germans as possible. Schreiber was ideally cast as Zus, and his performance is largely what drives the film. It’s well worth consideration for Oscar gold, and I hope the Academy voters will recognize it.

It’s usually around this time of year that people start getting sick of the defacto frontrunners and start looking for a fresh take.¬†¬† I don’t have a problem with any of her choices except that they leave out some of truly great performances this year – for instance, George Clooney better than Pitt or John Malkovich in Burn After Reading? Malkovich owns in that movie. Secondly, Frank Langella in Frost/Nixon? The only logical reason for that ommission is boredom. It makes no sense otherwise. That said, I wouldn’t mind seeing Defiance get some last minute Oscar love. Oh, and she completely leaves out Ralph Fiennes for his work in In Bruges, The Duchess or The Reader. Surely he ought to get some recognition.

by Sasha Stone
107
No Result
View All Result