Backstage at the Luncheon

by Sasha Stone2
in AWARDS CHATTER
10 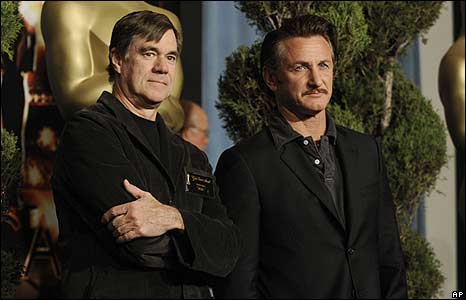 I like the NY Times/Carpetbagger Michael Cieply’s take on the backstage goings-on at the luncheon. He takes a one-cool-removed tone to the whole affair. It makes me think it would make a great much longer piece. In fact, his and Mark Harris’ pieces would make good copy for a book on the season. I guess that’s why they pay them the big bucks. Cieply writes:

Apart from some official back-patting from the stage‚Äì‚Äùeverybody wins‚Äù Mr. Ganis said of the day‚Äôs spirit ‚Äìthere was some serious body-language going on. Brian Grazer, nominated as producer of a best-picture contender ‚ÄúFrost/Nixon,‚Äù came off the stage, made a beeline to Danny Boyle‚Äôs table, and wrapped him in hugs. Given the front-runner status of Mr. Boyle‚Äôs ‚ÄúSlumdog Millionaire‚Äù in the best picture race, it was hard not to see a little bit of good-natured concession in the moment.

Gus Van Sant, director of ‚ÄúMilk,‚Äù was chit-chatting in back of the room with Mickey Rourke, the star of ‚ÄúThe Wrestler.‚Äù Mr. Van Sant looked schlubby and happy. Mr. Rourke, wearing what appeared like pink suede shoes, looked happy, too. Sean Penn alone outside on the smoking balcony, and (shockingly) did not look especially happy.

Up in the Air and Locked, Cat by Cat