by Sasha Stone
in AWARDS CHATTER
31 Having a conversation with writer/director Courtney Hunt is like standing in the eye of a hurricane. You sense the chaos just outside the boundaries of her world but there is no mistaking the inner calm. She‚Äôs one of a handful of women ever nominated for original screenplay for Frozen River, the story of a suddenly single mother on a frantic search for cash just before Christmas. Hunt was more than writer on the film, she was the director and main motivational force, a role that was vital in getting it made.

Our conversation ranged from talking about the script, how she got it made, the difficulties with production, to what she planned to wear for the Oscars — her close friends are apparently hounding her about ‚Äúthe dress.‚Äù She is choosing wisely, and makes absolutely no pretense about her excitement. ‚ÄúNo, I think I‚Äôll just stay home and….‚Äù She pauses, waiting to see if I got the joke. Then after a moment, she bursts out, ‚ÄúOf COURSE I‚Äôm going.‚Äù
For some people, a screenplay nod means you‚Äôre just part of the big beast that makes it through awards season without a hitch. You‚Äôre attached to the favorite for Best Picture, and you might win because your movie isn‚Äôt winning Best Pic and so you win by default. Hunt, though, isn‚Äôt attached to anyone but herself, and maybe Melissa Leo.¬† And this isn‚Äôt her first major accolade; she dazzled the New York Film Fest with the short of Frozen River, which is what inspired her to make the feature.¬† She won the Grand Jury Prize at Sundance. She also won Best Film at the Gothams. Even if she was snubbed for a WGA award, it seemed inevitable that Frozen River would eventually get to the Oscars.

Women writer/directors are doing much better with Oscar, which was why it was possible to imagine Hunt getting a nod in the first place. This year, Hunt has competition in the original screenplay with Andrew Stanton‚Äôs Wall-E, Dustin Lance Black‚Äôs Milk, Mike Leigh‚Äôs Happy-Go-Lucky, and Martin McDonagh‚Äôs In Bruges. They are all strong contenders in the category and and any of them could win. 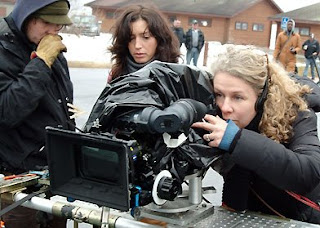 Hunt‚Äôs being a woman is really beside in the point in every way you can think of except where it comes to the context of the story. No one but a woman, a mother, could have depicted such a real sense of urgency and desperation when it comes to a mother looking out for her young. For this reason, it‚Äôs important to remember Hunt is a woman. In every other way, though, this didn‚Äôt seem to make much of a difference in her journey in bringing Frozen River to the big screen.

The project began as an idea for a short film based on the human smuggling rampant near the Canadian border in upstate New York. Hunt found herself particularly fascinated about the idea of the mode of transport. ‚ÄúThe river doesn‚Äôt stay frozen very long,‚Äù she says. ‚ÄúBut people cross it all the time. I wondered what would happen if someone got stuck.‚Äù

And that fear is part of what drives this story, as it is the inevitable danger and consequence of taking that kind of risk.
Hunt also unearthed the dynamic between the Mohawk reservation. Two mothers from different worlds work together for the same basic need: to provide for their children. Somewhere in the middle of all of that is a son trying to be the man of the house and failing miserably, at least in his mother‚Äôs eyes. Various huddled immigrants hoping for a chance at the American bounty who cram into trunks, the odd connections and hands that exchange dollar bills to make this happen.

Hunt remembers how difficult it was to shoot in those conditions. Her publicists kept asking her for any on-set photos that didn‚Äôt involve her wearing five layers of down. More difficult at first for Hunt was earning the respect from her crew. ‚ÄúThey were looking at me like ‚Äòhow is she ever going to pull this off?‚Äô‚Äù But in a few days, Hunt says, they were a team. ‚ÄúThey just needed to be reassured that I knew what I was doing.‚Äù
Hunt‚Äôs experience came from years at Columbia Film School, but she also has a law degree. She says her father blogs but she won‚Äôt reveal where or how. She was raised by her mother, another scrapper who knew how to do what was necessary to get the job done. ‚ÄúWhat I learned from my mother is that there is more than one way to skin a cat.‚Äù When her mother hit a roadblock, she said, she would find another way, which is partly what inspired Hunt to seek outside financing independently to get the film made.

When I told her I thought she should have gotten a directing nod she paused and said, a little surprised, “thank you.”¬† It’s not easy for women filmmakers to break in — not only to the film business but especially the Oscar race. Hunt, though, talked at length about how she never really saw it so much as overly difficult for women as difficult in general to be an independent writer/director looking for hands-off funding.

She recounted a story in which Focus Features’ Jim Schamus told her that it would never be easy to get financing, that no matter what level she reached, it will always be hard work. Hunt believed that she needed to tell a good story in order to feel like her investors had gotten their money‚Äôs worth.

“It was all in service of the story,” says Hunt. That is how Frozen River got made and how it continues to gain ground through word-of-mouth. Hunt wrote the story first as a poem, which she then turned into a short film, then rewrote it as a feature after the short did so well at the New York Film Festival. So, when it was time to finally shoot, she says, they filmed the script just as it was written, every detail, down to the way Melissa Leo applies her mascara in the mirror.

‚ÄúEverything you see on screen was on the page,‚Äù she says. This was partly due to Hunt‚Äôs singular vision. But it is mostly due to the tight budget; there simply wasn‚Äôt time to improvise. Melissa Leo, she says, was someone so skilled at what she does she could nail it on the first take. Leo was also on hand to help read lines with the younger actors on set.

Hunt says in one way she really felt like a mother on set, and that is where the kids were involved. She had her own little daughter on set but she was also responsible for the child actors. She went above and beyond, she says, to ensure that they were left untouched by the film‚Äôs darker themes and situations.

Hunt says she‚Äôs fielding offers now to direct other scripts. She has her own script she‚Äôd like to direct at some point but says that since it takes place in the early 19th century it‚Äôs been rough getting anyone to consider it seriously. With the Oscar nomination on top of the heap of acclaim that might not be impossible.¬†¬†¬† Something tells me, though, that if it is just a matter of money that isn‚Äôt going to stand in her way; if she wants to make this movie, she will make it.¬† Like the characters she wrote so well in Frozen River, she‚Äôs a scrapper. And a scrapper knows where to look, what to grab, who to call, and never drops the ball.

The Washed Out Season

Mark Johnson’s Good as Gold: The End of a Long, Strange Journey

by Sasha Stone
114
No Result
View All Result