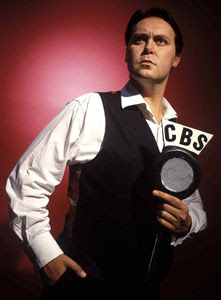 There have been rumblings about McKay’s portrayal of Orson Welles all year. In one of his Twitter posts yesterday @stevepond wrote that McKay was “staggering” in the role and that they’ll run him in supporting “even though he dominates the movie,” he says.

Good move, though, as the Best Actor race has now officially become the most crowded category. Supporting Actor feels open enough right now – it might come down to Stanley Tucci vs. Stanley Tucci vs. Christian McKay vs. Christopher Plummer vs. Christoph Waltz vs. Alfred Molina. It is always a depressing truth every year to find almost triple the amount of actors to actresses in the Oscar race, both categories.

Let’s talk quickly about Supporting Actor.¬†¬† By the time the Globes nominations roll out, Supporting Actor starts to feel locked up.¬† Though that isn’t always the case. Matt Damon in Invictus could be a last-minute entry, and who knows who else. It’s a fun game to play and it wouldn’t be fun if it was already all figured out.

It is looking pretty good right now for:

Christoph Waltz – owns Inglourious Basterds.
Stanley Tucci – not only a beloved actor within Hollywood, an underrated one at that, but sure to deliver another great one in The Lovely Bones, adding to his wonderful turn in Julie & Julia.
Christian McKay – take it to the bank.
Alfred Molina – it’s going to be hard to not fall in love with An Education — Molina or Peter Sarsgaard should be recognized in the supporting category – both are great.
Christopher Plummer – long, love overdue.

And then the two from The Hurt Locker, Anthony Mackie and Brian Geraghty. Brilliant performances by both of them. The ensemble for The Hurt Locker should see some SAG love if all goes well. There is Woody Harrelson for The Messenger. ¬† Jake Gyllenhaal and Sam Shepard are both going to be pushed for supporting for Brothers. It might be silly to mention Zach Galifianakis for a supporting nod, but the reason he might not be considered has nothing to do with his work and all to do with his reputation. If he were a “serious” actor turning in the same performance he would be a shoo-in.¬† It’s just that he’s a comedy guy and no one takes them seriously. For all of the names up for consideration, check out the Gurus chart.

Who will win The Best Director Oscar?

PIECES OF A WOMAN: (L to R) Ellen Burstyn as Elizabeth and Vanessa Kirby as Martha.

BAFTA Contest Up and Running

A Q&A with the Filmmakers and Cast of Shortlisted Live Action Short, ‘Da Yie’