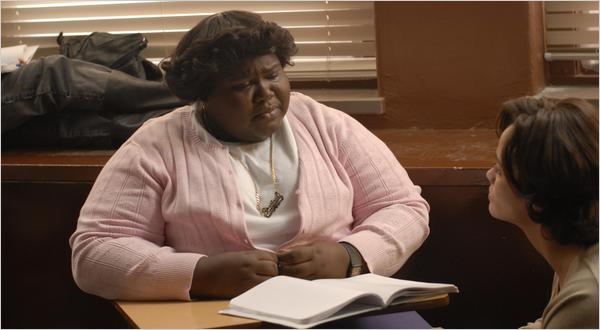 Pressing things right to the line is Lee Daniels’ controversial film, Precious. The New York Times’ Felicia Lee has written a fair-minded (in my lily-white opinion) account of both sides. There is Armond White on one side, Oprah on the other, and a whole bunch of people with varying views, in between:

On his blog, Televisual, he wrote that Precious was ‚Äúby far the scariest movie for anyone invested in having only ‚Äògood‚Äô representations of black people (‚ÄòThe Cosby Show!‚Äô) in film and TV.‚Äù

In that case, ‚ÄúPrecious‚Äù need not apply. Set in Harlem in the late 1980s, the movie focuses on Claireece Jones, a teenager known as Precious, who is sexually and emotionally abused by her enraged, foul-mouthed mother, Mary (played by the actor and comedian Mo‚ÄôNique). They rely on welfare; Precious is H.I.V.-positive; and the first of her two children (both by her father) has Down‚Äôs syndrome. Precious fantasizes about having a light-skinned boyfriend and about herself as a thin, white girl.

Joe Drake, president of the film division at Lionsgate, the movie‚Äôs distributor, sidestepped a response to the more negative charges about the movie.

‚ÄúPrecious has become imperative viewing and entered the cultural conversation in an organic, impassioned way,‚Äù Mr. Drake wrote in an e-mail message. ‚ÄúWe are proud to be a part of this phenomenon.‚Äù

Sapphire, the author of ‚ÄúPush,‚Äù said it was too late in the day to worry that the film‚Äôs themes and images were somehow stigmatizing or inauthentic.

‚ÄúWith Michelle, Sasha and Malia and Obama in the White House and in the post-‚ÄòCosby Show‚Äô era, people can‚Äôt say these are the only images out there,‚Äù Sapphire said. ‚ÄúBlack people are able to say ‚ÄòPrecious‚Äô represents some of our children, but some of our children go to Yale.‚Äù

‚ÄúChild abuse is not black,‚Äù she added. ‚ÄúWhat do you call the man in Austria who imprisoned his daughter for years?‚Äù

She defended her title character as a positive ‚ÄúOliver Twist-like‚Äù figure, who grew out of the stories of the young people she met in New York in the late 1980s, when crack and AIDS emerged.

‚ÄúPush,‚Äù which was controversial when it was published in 1996, is also back at the top of best-seller lists.

That the character can’t be seen as anything other than “a black girl” is proof enough that we still have a long way to go. I suppose that is because the cliches are already so deeply embedded there is no stepping out them. I see a universal story of abuse — it recalls a time I remember quite vividly, walking up to a restaurant and seeing a mother bullying her teenage son, physically threatening him as he backed down. He could have easily taken her down but a lifetime of dominance made it impossible to do so. Being the busybody that I am I glowered at the woman, and if the boy had been a kid I would have intervened. They were white, however. So yes, on the one hand you have Lee Daniels’ assertion that the black community is dealing with abuse passed down from slave owners to slaves and from thence into the black community.

Daniels talks about witnessing it in his own life at the hands of his father and seeing it with other kids in his community; he once saw his uncle beat his toddler son for not eating his rice. This is not just a black community thing, particularly the sexual abuse, which happens far more in white communities than in any other culture. Imprisoning a girl and raping her repeatedly seems to be a singularly white and western thing to do, although those are the only stories we hear about. Perhaps it goes on more in areas the news has long since neglected.

Daniels isn’t the only person I’ve ever heard on this subject but his is the most timely, and he is being attacked by people who really want to see images of the black community portrayed differently on film.

Another interesting article on the subject can be found at The Grio:

For the ancestors of today’s African-Americans, the physical violence of slavery — including whipping, beating and other acts — served to humiliate them, break them, and keep them in control.And even after slavery up until today, many black parents have disciplined their children by giving them a “whoopin” or a beating every now and then, some more often than others. Everyone has heard the story about the child whose grandmother directed him or her to go to the backyard and select a “switch.”

I have absolutely no authority to speak on the matter, I acknowledge this completely. I do know something about abuse, however. I also kind of feel like it’s time to let artists be independent of their community and just tell stories. Can Lee Daniels tell a story without inflicting a negative image on the black community to the world? I don’t really know the answer to that and, as I said, I’m not really the right person to be answering it anyway.

The Road in color