Reitman and Son – Filmmaking is a Family Business

by Sasha Stone
in AWARDS CHATTER
2 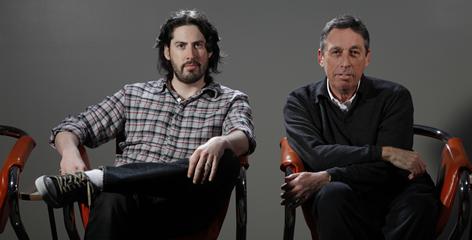 Up in the Air is the stealth snake in the grass for this year’s Oscars. In Contention‘s Kris Tapley keeps saying that two films could really upset the apple cart and they are Up in the Air and Up. Up in the Air is exactly the kind of film that could benefit from a strategic three-way split between Avatar, The Hurt Locker and Inglourious Basterds. It is a film everyone liked, no one hated, and will wind up somewhere in the top five, if not the top three. Meanwhile, USA Today’s Anthony Breznican talked to Reitman and Son about filmmaking:

Both men see their differences as storytellers. Jason is more often compared to contemporary Alexander Payne (Citizen Ruth, Election, About Schmidt and Sideways) than to his father’s hit films: Stripes, Twins, Kindergarten Cop and Dave.

Ivan’s parents were Holocaust survivors and refugees from Communist Czechoslovakia, who immigrated to Canada when he was a young boy. Jason grew up much more comfortably, the son of a one of Hollywood’s most successful comedy directors.

While Ivan’s childhood sent him perpetually in search of a laugh, Jason’s “allowed him to be very probing and satirical and very genuine about the subject matter that he was attracted to,” his dad says.

While Jason is often asked about the influence his father has on his work, Ivan acknowledges that his son, even as a boy, may have influenced him.

NY Times Says Hurt Locker Should "Win it" for Sound

by Sasha Stone
113
No Result
View All Result