by Sasha Stone
in AWARDS CHATTER
129

The truth about this year is that we are all flying blind. There isn’t a single person out there who knows how the ten best picture nominees coupled with preferential ballot is going to go. We can’t really compare it to previous years because the voting isn’t the same.

It seems clear that if we were dealing with weighted ballots, Avatar would win like Gladiator or Chicago – big win for a big, popular movie that is strong on box office and general appeal but isn’t going to win the writing or directing awards.

Nonetheless, folks keep dragging out comparisons to try to find a connection. The most recent is The Hurt Locker is Brokeback, and either Avatar or Inglourious Basterds is Crash.

Here is Dave Karger writing for EW, getting nervous about his predictions:

All of this is on my mind right now because we‚Äôre about to put our Oscar Odds issue to bed (it‚Äôll be on stands this Friday), and it‚Äôs really making me think twice about my prediction that The ‚ÄúHurt Locker‚Äù will emerge victorious on March 7.

There‚Äôs still a distinct possibility that ‚ÄúHurt Locker‚Äù will mirror ‚ÄúBrokeback‚Äù yet again and win three Oscars (let‚Äôs say Best Director, Best Original Screenplay, and Best Editing) but lose the big one to a more easily-digestible rival, in this case ‚ÄúAvatar.‚Äù

So first off, I have to silence the Brokeback vs. Crash theory. First, they were dealing with a weighted ballot. Totally different thing. Brokeback was a film many older men in the Academy simply refused to watch. I think if they had watched it, Brokeback would have won but that’s just me. The bigger reason for Crash’s win is that it was a sentimental weepy. So that makes it a bit more like Avatar, which is another reason that Avatar might win in a weighted ballot scenario. Remember, the Oscar voters have to cry. “Why do men cry?” They cry because they see a sappy movie. “What makes men cry?” Helpless people being rescued.

The key to the whole season might lie in two precursors only – the PGA and the BAFTA. The PGA because it is the only precursor to use the preferential ballot with ten films on the slate, including both Inglourious Basterds and Avatar – The Hurt Locker still won.

This was, admittedly, before all of the really ugly campaigning started – where studios and producers started feeding bad thoughts to bloggers who then posted them because it was a “story.” It is also the moment where desperate outlets trolling for hit counts publish “controversial” pieces that challenge the status quo. It is also the moment where we all sit around with our thumbs up our asses waiting for something, anything to happen. And yes, boredom is often a reason upsets happen. And yes, the Academy has often decided to go its own way.

The other year people keeping dragging out is the Shakespeare in Love vs. Saving Private Ryan year. Again, Avatar is greatly lacking in the writing and acting (zero nominations in both) but it makes up for it with heavy sap and gorgeous visuals, not to mention $700 million at the box office.¬†¬† It is well knows that in the last days, a heavy whisper campaign against Saving Private Ryan helped to derail that film, but in the end it was about the sap – not about the artistry of Saving Private Ryan.

In both Crash and Shakespeare in Love’s Oscar runs they won the SAG ensemble before getting to the Oscars – that is the key difference. Inglourious Basterds won the SAG and Avatar wasn’t even nominated. Also, The Hurt Locker did not send out screeners to the entire voting membership of SAG – which costs hundreds of thousands of dollars. So it might not be indicative of anything. Then again, it might. Look, the bottom line is this, Oscar watchers. Since it is such a crazy year, no one should be faulted for taking a risk on Best Picture. I really feel like it could be any movie for the win and I would not be surprised.

I remain of the belief that The Hurt Locker is heads and shoulders above the other nominees – and thus, it becomes a tribute to good filmmaking alone, since it didn’t have the kind of budget nor the visual effects Avatar had and it didn’t have the star power Inglourious Basterds had. It has gotten this far because it is a good movie. And yes, I have read the cynical articles that proclaim it is only getting this far because a woman directed it.¬† This will always be the proclamation throughout the years – it is a woman today, but tomorrow it will be “it’s only because he’s black,” or “it’s only because she’s gay,” or “it’s only because he’s got one leg.” When will all of that be over and done with? I guess in another 82 years. 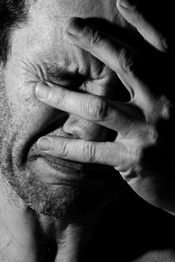 This is often how winners finish off voters — the sappy movie. Shakespeare in Love and Crash were both heart-swelling films. And as much as I love Shakespeare in Love I have to admit it has had far less staying power than Saving Private Ryan. Crash is a footnote in a discussion of the worst Oscar upsets of all time.

But this is, again, more of the weighted ballot scenario – not the preferential ballot. My thinking is that Avatar has to win the first round, with no competition from either Inglourious Basterds or The Hurt Locker to win. It’s possible. Never underestimate the power of the ugly cry – and only two movies do that, three if you count The Blind Side. Precious and Avatar.

I do not think it is a bad prediction to go with Avatar. I feel the old guard is lifting its heavy boot and laying it down this time. Look, it was never going to be easy for The Hurt Locker to win this. It is by a sheer miracle that it has made it this far. A miracle. No one ever thought it would. When it won the PGA it had everything working against it – Avatar’s fresh Globe win, its box office, etc. Somehow, it pulled through there and it has been on a roll ever since.

I sense its popularity is different from Brokeback’s or Saving Private Ryan’s — different films, different themes, and a different dynamic overall. But yeah, The Hurt Locker isn’t an ugly cry movie. That’s the truth of it. It is a masterpiece, however, and will remain so whether it wins the Oscar for Best Picture or not.

Finally, I’m currently on the year 1940 in my charts examining how the Oscars went down when there were ten nominees for Best Pic and a preferential ballot. Rebecca won Best Picture and no other Oscars. The Grapes of Wrath won Director. The Philadelphia Story won Screenplay. An embarrassment of riches, to be sure. What I have noticed is that it’s more likely to see the awards split up all over the place than it is to see a sweep of all of the categories. Films do sweep, of course, like Gone with the Wind. After the Rebecca year, only three films went on to sweep both Picture and Director – How Green was My Valley, Mrs. Miniver and Casablanca.