by Sasha Stone
in AWARDS CHATTER
5

Jeff Wells at Hollywood-Elsewhere finds himself conflicted over Jim Cameron lending a hand to native people who are trying to preserve their land and way of life: 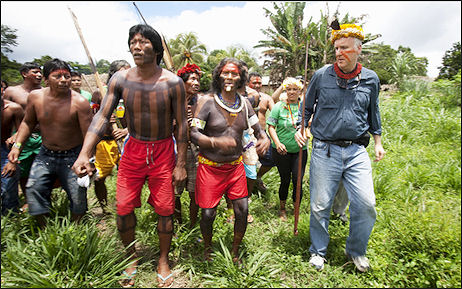 What I mean is that it feels “right” and a tiny bit weird at the same time. What is environmentalism if you don’t stand up and do something along the lines of what Cameron is attempting? And yet there are faint echoes of hubris in the image of a rich American director flying down to Brazil and proclaiming that a genuine life-or-death, money-and-greed situation is a reflection of a creative vision that led to an enormously successful film.

Cameron’s heart is obviously in the right place, and I agree with his likely assessment, which is that the dam is a stand-in for unobtanium, the Avatar MacGuffin. And that the dam is probably an arrogant initiative by a relatively small group of government bureaucrats who are looking to favor certain contractors, and with no regard for the blight it will bring about.

One feels the need to admire Cameron’s actions – he’s backing up his beliefs and showing that he’s willing to stand up for the themes and message in Avatar.

Sooner or later, though, Cameron will have to put his MONEY where his good faith is. A couple of million will shut a lot of people up. Maybe? The thing that struck me most about the NY Times piece was that, in the end, all Cameron could really do was write a letter to the government. They will look at that and laugh, maybe frame it as a souvenir. This is about money and the region’s economy. This is not really about raping the land of its natural resources for profit (mining for diamonds or whatever). Cameron says he’s using this experience to do research of actual native people to make his sequel perhaps more realistic.

So he’s getting a lot out of it. And he’s drawing attention to it. I suspect this move from an environmentalist’s standpoint is much about preserving the Amazon. It might not help, but it certainly can’t hurt. The more attention drawn to the kind of negative impact developers can have on necessary land the better.