Two films screened this morning on Cannes. One is absolutely great, and the other is okay, but not anything truly exceptional. Mike Leigh‚Äôs wonderful Another Year is the strongest film I‚Äôve seen here, but given the amount of films that have screened, and those still yet to screen, that might not be saying much. Another Year was first, and You Will Meet a Tall, Dark Stranger second. What was interesting was that they are both by directors who write their own rules and often tell stories of interconnected human relationships.

But Mike Leigh has proven, at least this time around, the more adept storyteller, the braver filmmaker and someone who can have an enormous amount of impact without any of the Hollywood conventions to which we‚Äôve all become accustomed. Allen, by contrast, is doing what he likes to do ‚Äì write a movie and cast it with high-profile actors. It doesn‚Äôt NOT work, but it suffered a bit by being shown after the Mike Leigh film.

Death has always been one of Woody Allen‚Äôs favorite stars to work with. Or, as he might have said, ‚Äúdeath and sex: two things that come once in a lifetime.‚Äù Death and sex. If you want to boil Woody Allen down to the basic themes, that‚Äôs where you start. But maybe not even sex specifically, maybe love ‚Äì carnal love, romantic love, forbidden love. Many of the same themes thread throughout his movies, especially his later, lighter comedies but all of them, really. 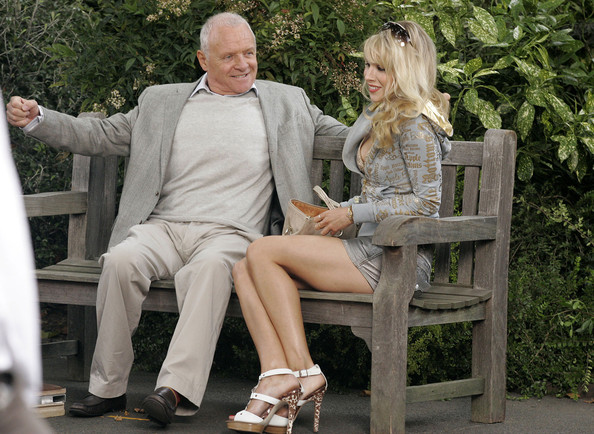 And if it‚Äôs true of his most recent movies, it‚Äôs especially true of his latest, You Will Meet a Tall, Dark Stranger. Allen uses that title to both describe what quack fortune tellers often say to their gullible clients, and as a way to describe death. In the end, death is the only thing we can be certain of.

Part of what drives the main character, played by Anthony Hopkins, to get himself into shape, refurbish his outward appearance, and then meet and fall in love with a very tall, leggy blonde (Lucy Punch) IS the need to stave off, what Woody described in Hannah and Her Sisters as ‚Äúthe inevitable decay of the body.‚Äù Can a younger woman make an old man feel good about himself?

Either way, the dumb, busty, leggy blonde has made numerous appearances in Woody‚Äôs films, but mostly in his later ones, beginning with Daryl Hannah and Alan Alda‚Äôs flame in Crimes and Misdemeanors, but also Lysette Anthony as the aerobics instructor girlfriend to Sydney Pollack, Mira Sorvino‚Äôs Oscar-winning role, Evan Rachel Wood in Whatever Works, etc. They appear so often. Most of the time they are whores who are stupid but sweet. Here, Woody has evolved that archetype to make her insincere and dishonest.

The flipside to the dumb, sexy blonde is usually the psychotic neurotic. This female is so obsessed and needy she is destined to die, either by her own hand or by murder.

Lucy Punch is the woman who gets to play the dumb blonde. She plays a hooker, or escort, hired by Anthony Hopkins character to, essentially, have Viagra-induced sex with him. His ex-wife is Gemma Jones and she‚Äôs become completely devoted to a fortune teller who has her on the hook.

In today‚Äôs press conference, Allen did not mince words. He called them frauds out to rob people at their most vulnerable. And indeed, the film reveals that if we could cheat death, we would. If it wasn‚Äôt final life might be slightly more bearable.

You Will Meet a Tall, Dark Stranger has the usually Woody Allen stuff about infidelity and self-deluded characters. It‚Äôs funny and more than delivers for what Allen has been known for lately: a little sex, a few laughs, and enough depth to give you something to think about later.

Josh Brolin plays Naomi Watts‚Äô failed writer husband. Much of the stuff between them, and Watts‚Äô mother played by Gemma Jones, is fantastic. Watts does Woody Allen very well. I kept hoping she would have a little more to do, however. Gemma Jones and Lucy Punch are probably the two who have the best chances of Oscar nominations. Both Brolin and Watts have two films here.

The much better film, though, was Mike Leigh‚Äô Another Year. Leigh has evolved as a man and as a human being differently than Woody Allen has. Allen said in the press conference that he doesn‚Äôt think anyone gets better, wiser, smarter with age. And that might explain why his material often feels like a broken record, with the same characters and themes appearing with regularity.

By contrast, Mike Leigh, who really does take much of his material from the wisdom of his cast, seems to keep evolving. As he does so he reveals profound observations about humanity in a way no other filmmaker can.

Another Year is a sweet, sad and concise story of a married therapist Jerry (Ruth Sheen) who spends a lot of time being a generally compassionate person. She has a great marriage with her geologist husband, Tom (Jim Broadbent), and she is the only friend of the very neurotic Mary (the absolutely brilliant Lesley Manville).
What makes the two women so different is that one is a quiet listener and the other is a narcissist who is so self-absorbed it takes her a full five minutes of talking before she even acknowledges anyone else in the room. When she shows up she dumps her current problems on Gerry, who listens kindly and offers her some comfort. Mary is a horrible drunk, and her track record with men has left her feeling unwanted and desperate.

As we dwell in the lives of these people, it starts to reflect, ever-so-gently, back at us. Unlike Happy-Go-Lucky, Leigh‚Äôs film from 2008, this one is more universal in its observations.

By the end, it really does feel like we‚Äôve just spent the past hour and half WITH these people, not watching them. Particular attention should be paid to Lesley Manville who alternates between varying states of hysteria. She slowly but surely melts down and as she does one is caught between repulsion and pity. By the end, it’s hard to imagine any actress being able to pull that off. Manville has no “Hollywood cache” but hopefully the actors branch will be smart enough to see a magnificent performance when screening this film.

Part of what makes Leigh‚Äôs films so great are the actors he chooses. While Woody Allen always gives credit to his actors because they fit the part, Leigh‚Äôs actors are able to really draw up these unique characters, do much of the work on their own. That is, perhaps, why they are so complex.

By the end of all of this madness, the standout film may remain Another Year. It is Mike Leigh at his absolute best. It is surely less irritating than Leigh’s recent films have been. It is up there with his best female-driven films, like Secrets and Lies and Vera Drake.

How is it that Leigh can be so good and go so deep with these actors as he manages to do? It is one of the great mysteries.