by Sasha Stone
in AWARDS CHATTER
3

Thanks to KevinK for the link to these. Fan shot pics of Jeff Bridges looking his age, eye patch and all. He will, from here on out, have the Oscar calm as an actor. It happens to all of them. They win one and they can exhale. Of course, Bridges might just be that way anyway. 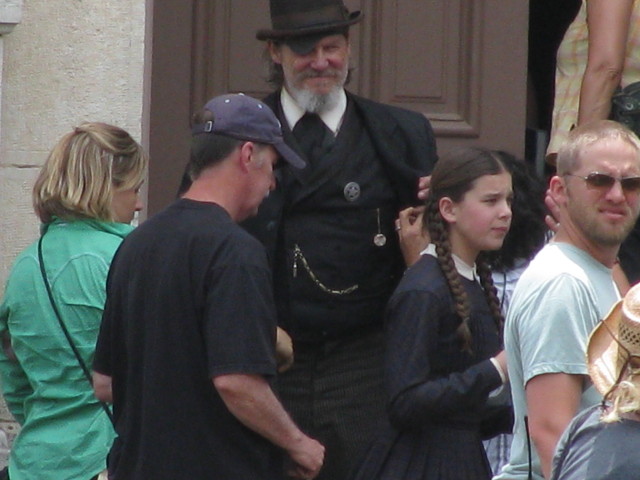 More at the source.

Meanwhile, Art T. Burton at the Times Record Online wonders if it will be accurate:

Will diversity be shown in the Coen Brothers’ remaking of the movie “True Grit,” which is based on the Charles Portis novel of the same name? Since the time the novel was written in 1968, new historical research has come to light.

The outlaws in the Indian Territory were black, white or Indian and operated in integrated gangs and the same is true of its lawmen. Research finds that the deputy U.S. marshal who had the most “true grit” was a former slave named Bass Reeves. Reeves arrested more than 4,000 felons, and newspapers at the time of his death stated that he had killed more than 20 men in the line of duty; this was stated in his obituary by the Washington (District of Columbia) Herald newspaper on Jan. 13, 1910.

I have written extensively on Reeves and the Fort Smith court in my book, “Black Gun, Silver Star: The Life and Legend of Frontier Marshal Bass Reeves.” The Coens’ “True Grit” comes out on Christmas Day; will it be the real “true grit” or the real “truth”? If not, we should ask somebody why.

Being that it’s the Coens, I doubt that accuracy will be their primary concern.