by Sasha Stone
in ANIMATED FEATURE
17 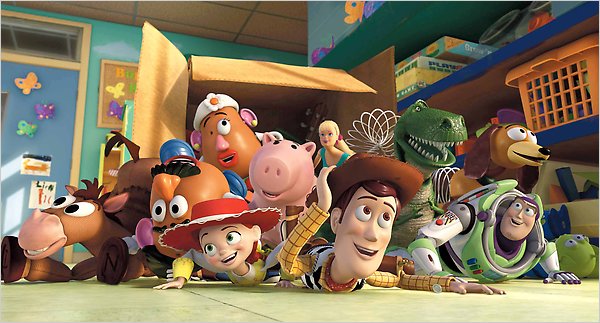 Todd McCarthy, writing on Indiewire’s Deep Focus blog, thinks that Toy Story 3 matches the genius of the first two Toy Story films, breaking the curse that says that sequels (Godfather, etc., as notable exceptions) are never as good as the original:

Does ‚ÄúToy Story 3‚Äù break the jinx? Pretty much so, yes. Attended to in every creative department with all the care that one has become accustomed to expect from Pixar, the new film, after a slam-bang action teaser, takes perhaps a bit longer than necessary to put all its pieces in place. But once it kicks in to unexpectedly become a prison-break thriller, it fires on all cylinders all the way to the finish line.

The main reason Pixar has established itself as the best film company in the world is that its top priority is story, story, story. No matter how dazzling the technique (the 3D is perfectly judged here), how funny the gags or how sly the characterizations, the narrative superstructure is as sound as the engineering for the Eiffel Tower or a 747, the plot as satisfyingly consummated as in a novel by Dickens or Hammett. There are visible formulae at work here, to be sure, especially with the emotional injections administered at the beginning and end, but they convey honest and valid sentiments lying at the heart of the attachments of characters that now have long histories, both with each other and the audience.

Meanwhile,¬†Trailer Addict has posted three new clips from Toy Story 3, courtesy of the Pixar Blog. And the NY Times has a piece about designing the characters.

Two more after the cut.