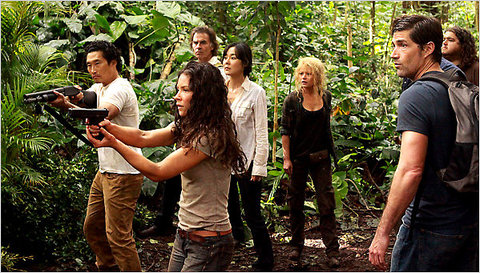 The Emmys are so all over the place. ¬†Good TV stands out above the rest, but lately good TV is getting better and better. ¬†It’s especially easy to shine when the networks are still so dependent upon reality-TV programming.

Tom O’Neil has posted his predictions ¬†- and they’re hard to argue with. ¬†I will springboard off of his and do a little of my own.

I swapped out Brothers and Sisters for Damages — it’s not my cup of tea but it seems like it is something “they” would like. Treme is a definite possibility.

Is Two and a Half Men eligible? Because it’s hard to imagine it not getting nominated, if so. I threw in The Office and Hung because I think they are just fab. My alternate would be The New Adventures of Old Christine.

I’m going with Tom on all of these except one – I don’t know about Timothy Olyphant just yet. I went ahead and added Matthew Fox.

Oh god. So I put Sally Field in there because, you know, she’s Sally Field. And I also put Anna Gunn in there. Just for the hell of it because I don’t know how you ignore Breaking Bad for all categories.

I wish Thomas Jane would get a nomination for Hung. So I added him. This is just to entertain myself. I really have no idea what they’ll do.

I differ from Tom here by adding Julia Louis-Dreyfus.

I agree with all of these predictions by Tom so we’ll just leave it at that.

I went ahead and added Jane Adams because she is so great.

I like all of Tom’s predictions here so I will hold.

Please head over to Gold Derby to see what else he predicted.

DiCaprio and Scott stalking The Wolf of Wall Street?