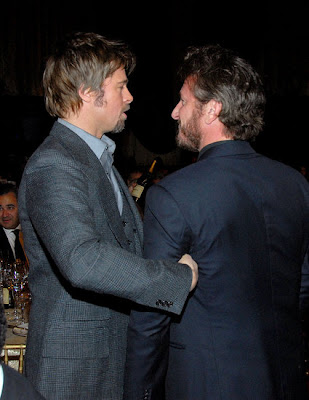 The Toronto Star’s Pete Howell spitballs what could be big gets for the Toronto Film Fest. These have not been announced nor confirmed – but what if? Howell names Terrence Malick’s Tree of Life as the number one biggest get, with the possibility of Sean Penn and Brad Pitt showing up to set the fans afire.

He named Clint Eastwood’s Hereafter next in line. Any Eastwood film at this stage in his career is a good get for any film fest. Whether Eastwood will want to do Toronto, though, is another question. I say he passes. But what do I know?

True Grit comes next, says Pete because “Lately it feels as if it‚Äôs not TIFF without a visit by Joel and Ethan Coen.” This pic is slated for a Christmas release, which puts it squarely in the Oscar zone. If it shoots its wad early in Toronto – what does that do for the long haul of awards season? But I agree: major get.

Howell then mentions Jodie Foster’s The Beaver as a possible title. “Now it‚Äôs guaranteed to attract trouble like a G20 riot, which the fest may decide it doesn‚Äôt need.” The film is probably DOA. Maybe in a couple of years it will get a release date.

The other titles mentioned by Howell include Brighton Rock, directed by Rowan Joffe and starring Helen Mirren and John Hurt, The Grand Master by Wong Kar-wai, High Rise, a Canadian contender for TIFF, Restless, by Gus Van Sant, Never Let Me Go by Mark Romanek, starring Carey Mulligan, Keira Knightley, and Sally Hawkins, and The Rum Diary, starring Johnny Depp. “Any time you can get Johnny Depp to come to town, you want that to happen.”