Kim Novak to be Special Guest of Honor at Cannes Film Fest, Restored Version of Vertigo to Screen

Exciting news that Ms. Kim Novak will be the Guest of Honor where the newly restored version of Hitchcock’s masterpiece, newly named Sight and Sound’s Best Film of All Time, Vertigo.

Vertigo is the kind of film that at the first few passes you might think, what’s the big deal? But it, like Citizen Kane, is the kind of movie that offers up more every time dive back into it. Let it be said that both Citizen Kane and Vertigo are downers, the sum and total of a man’s life disappointed by his failure to achieve his greatest desire.

Jim Emerson, over at Scanners, has written a thorough piece on the restoration:

Alfred Hitchcock’s “Vertigo” is one of the most ravishing Technicolor films ever made — all the more so in its VistaVision-to-70mm restored version. And color plays a key part in the mystery, emotion and psychology, of the film. Colors evoke feelings, and while Hitchcock liked to say that “Psycho” (made two years later) was “pure cinema” in black-and-white, “Vertigo” is a symphony of color, its multi-hued themes and motifs as vividly orchestrated as Bernard Herrmann’s famous score. 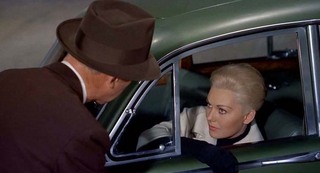 I first saw “Vertigo” on network television in the late 1960s or early 70s, shortly before it was withdrawn from release. I think I was somewhere between 12 and 14 years old — I know I saw it by myself on my parents’ new 19-inch color TV one night when mom and dad went to some neighborhood grown-up party — and I’m sure I didn’t understand the half of it. But it stayed with me — haunted me, you might say — between that fateful evening and its re-release in the mid-80s. By then, “Vertigo” had become, if not quite the Holy Grail of the American Cinema (after all, “Rear Window” and “The Manchurian Candidate” had been unavailable for years, too — and a great deal of “The Magnificent Ambersons” is still at the bottom of the ocean), then at least one of its most coveted (and fetishized) treasures.