It’s hard to believe that the Producers Guild announces thursday, isn’t it? Right now it seems like we have a pretty solid group of films that we all seem to think they will choose, give or take a surprise or two. The Producers Guild have 7,000 members, according to Wikipedia, and they use the preferential ballot, just like the Academy does. The Academy has roughly the same amount of members and also use the preferential ballot, but here’s the main difference and it’s a big one:

The PGA has ten nomination slots.
The Academy has only five.

Because of that difference, you see a lot of films make the PGA cut that don’t have a chance with Oscar voters because they aren’t in their top FIVE favorites, but might be in their top ten if they had that option. The difference seems to be, in general, darker movies don’t get chosen where more uplifting or aspirational ones do.

2017 is the first year since the Academy expanded its ballot that we do not have a strong frontrunner in terms of stats. One of the stats in the following charts is going to fail. Though these stats have failed, none of them has in the era of the preferential ballot, as you can see. However, one of them is going down this year because there isn’t one that has all of them as in previous years. 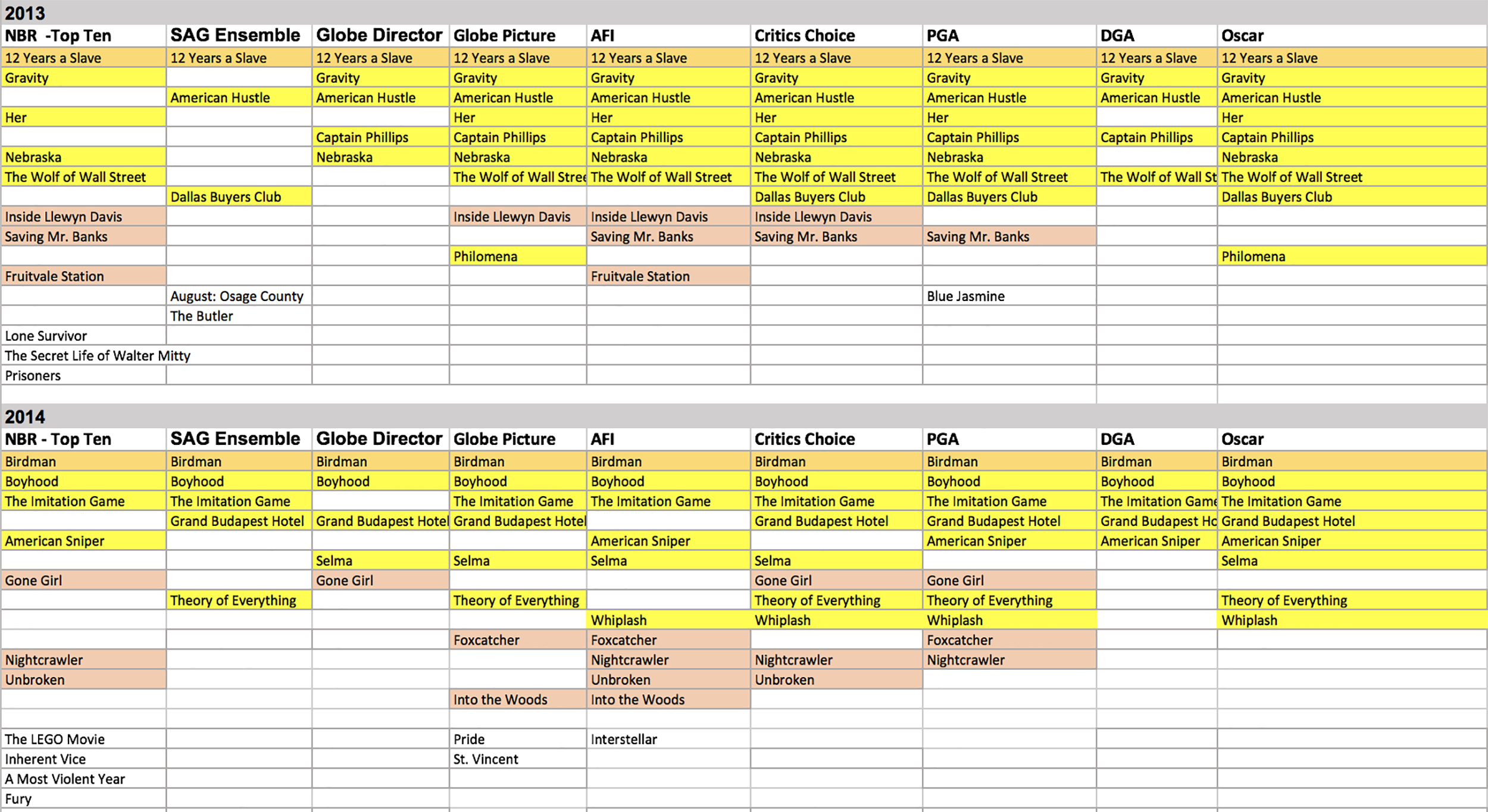 This will be the first year the winner doesn’t have all of them, that’s how crazy of a year this is.

Nonetheless, we can see how it might go just by looking at the above charts. Between 6-8, usually 8 from PGA make it into the Oscar race. And some of those come from these other lists. Globe director looks like one gets left off every year, but the other four make it in. About 6 or 7 come from AFI. The Critics Choice changed their date to be announced much earlier than they used to but last year they were still reliable for 8 out of the 9.

So – here is what I predict for PGA:

That’s six – and seems to be the solid six. All of these have ACE nominations too. Next tier would be:

Call Me By Your Name – seems to have enough support to get in with number one votes.
The Florida Project – also a passionate favorite.
The Big Sick – it is taking a lot of word of mouth to get people to watch it – once they do they fall in love.

That is nine. There will be one more. And that one might be:

Whatever the PGA ten end up as, all of them won’t make it into the Oscars because the Academy has a five nomination slot ballot and they allow for overflow. Some years there are 8 or 9. There never has been a five or a ten. Maybe someday there will be. These nominations tomorrow will help clear up whether the frontrunners are the frontrunners and which stragglers are in.

How about you all? What are your predictions?

My No Guts, No Glory prediction is I, Tonya as the tenth.

FYC: The Visual Effects Behind Okja with Erik de Boer and Method Studios