FYC: The Visual Effects Behind Okja with Erik de Boer and Method Studios

If you haven’t yet discovered Okja on Netflix, I encourage you to seek it out. Boon Joon Ho’s latest film stars Tilda Swinton as a greedy CEO who promises a new breed of “super pigs” that she claims can save the world from starvation. Ten special piglets are sent around the world for farmers to raise and as you might expect, messing with Mother Nature does not go according to plan.

Every frame in Okja keeps us captivated, whether it’s the lovable pig’s expressive eyes, or the chase scenes of the giant running through the woods or streets of New York. Every blink and movement is convincing and behind that movement is Erik-Jan de Boer, the visual effects supervisor who brings Okja to life — all eight feet in height, and 12,000 pounds in weight of her.

De Boer tells me he was first introduced to Boon in 2014, by Method Studios Visual Effects Supervisor Dan Glass, who had worked with Bong on Snowpiercer. “Bong showed us his initial Okja concept work, the size difference between Okja and Mija, and we talked about the relationship between the little girl and the creature and how to portray that as emotionally and realistically as possible.” From there, it was down to de Boer and his team which he says consisted of 320 people overall. Of that, 140 were artists and production support people at Method Studios and 180 at 4th Creative Party.

Of the design and visual influences, de Boer says, “Okja is a hybrid animal with elements of an elephant, pig, hippo, and various canines. The original design was done by Creature Designer Hee-Chul Jang, who created a five-inch-long sculpture that we scanned and turned into our hero CG asset. We adjusted elements like lips, jowls, ear size, feet shape, and added sparse hair to make her more appealing. Director Bong was confident in the design, and the final Okja is true to the initial concept. We built her from the inside out, creating a skeleton with muscle rig and several skin layers. Because her ability to produce a lot of pork is a story point, we had to portray her as luxurious without making her look grotesque or unappealing.”

Pushing the craft of visual effects to the new level, Okja builds a bond with his Korean handler Mija. De Boer says, “From that very first discussion it became clear that to communicate the bond between Okja and Mija we would need them to have unrestricted contact. In the story Mija strokes, rides, hugs and sleeps on top of Okja. In the VFX we were aiming for a physically and graphically flawless integration that we believed would make Okja’s existence and presence undeniable.” He goes on to say, “We wanted no contact restrictions between them, so we needed solutions that could handle improvisation. We had to be smart about the props we built to capture the proper physicality on set, which included everything from subtle caressing to hard pulling, pushing and shoving. We also wanted to shoot everything on location, for the best integration possible, so our props had to be robust and travel well, be light enough to puppeteer yet heavy and big enough to provide the overall physicality we needed.”

Research into motion studies allowed de Boer and his team to understand the props he would need for the major setups in the film. “Our Special Effects partner, CELL in South Korea, built 30 unique pieces out of EVA foam that they glued into very accurate 3D pig shapes. This gave us an arsenal of ‘stuffies’ that ranged from generic shape and size reference only to unique solutions for specific actions like when Mija sleeps on top of Okja, hugs her, or brushes her teeth.We knew we could most improve the realism of our CG creation by helping Mija deliver the most believable performances and really connect with the props on set. We rehearsed extensively, stayed in character, and we always had Stephen Clee, our Animation Supervisor, puppeteering the stuffies and working with Mija in front of the camera.” 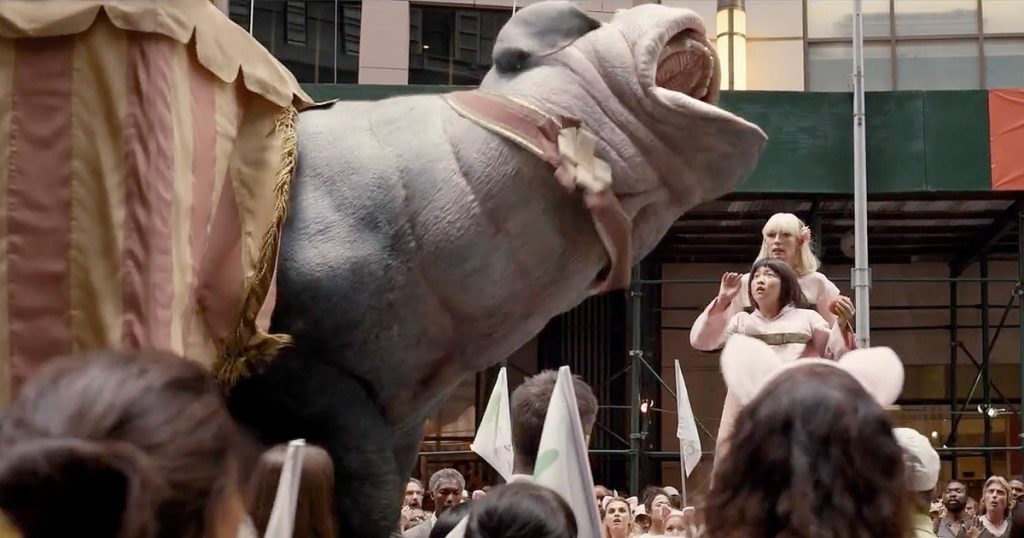 Consider Okja and the visual effects team in your FYC voting as they bring her to life. Stream Okja on Netflix.

Interview: Max Richter on Composing the Score for Hostiles