BAFTA: Of Stats, Conundrums, Frontrunners, and Underdogs — What to Make of This Crazy Oscar Year

How did the BAFTA change things this year? Well for one, it looks like they might help push Darkest Hour into contention, finally. Their love and support for that movie bodes very well for Gary Oldman and might even push it into Best Picture. Sure, it’s the ultimate British film outside of Dunkirk but still, Focus has to be pleased with how this morning’s nominations turned out. Dunkirk also got a boost. But the two real winners were The Shape of Water and Three Billboards Outside Ebbing, Missouri. Now, you will be hearing people declare Three Billboards the winner. Remember Guillermo Del Toro won in Venice for Best Director and Three Billboards won the coveted Audience Award in Toronto — both have been coasting along in the lead for a while now. But we’ve not had an official frontrunner. It looked for a time like it was Get Out, then it was The Post, then it was Get Out again, then it was Lady Bird, then it was Three Billboards, and now it remains Three Billboards at long last.

But hold up, there is still a ways to go. One thing the BAFTAs also did was firm up Luca Guadagnino’s potential Best Director nomination for Call Me By Your Name, which got a pretty decent boost from the British contingent. Remember, a lot of BAFTA members are AMPAS members as well. I’m not sure of the Director branch/BAFTA crossover but it is not something to ignore. Guadagnino could absolutely land in the top five at the Oscars (though probably not at the DGA).

The two most important stats for Best Picture are: DGA/PGA/SAG ensemble. You really need nominations in all three to stay strongly in play, at least as far as things go since 2009. That is surely going to change someday but we’re not there yet. My only point for you to know for today is simply what I’ve been repeating for months now. There are two scenarios where a movie can win: winning Picture/Director (usually on the first round of balloting), so if Three Billboards takes PGA, DGA and SAG ensemble — no problem. We have our winner. But if Shape of Water takes DGA, Lady Bird takes SAG, and Get Out takes PGA? Well, we’re likely in for a split year, a recount year, a weird winner year. And in that case, anything can win.

You all have seen our charts by now on stats, how since 2009 one or two films hit every marker we use to qualify them to win Best Picture. You’ve also seen how this year is different. No one film has taken all of them. Let’s look at how it lines up in terms of BAFTA.

Here is how it looked pre-BAFTA:

And once we fold in BAFTA for this year and last year, here is how it looks:

Before last night, Get Out, Lady Bird, Three Billboards, The Post, and Dunkirk were all missing only one major precursor. After the BAFTAs, things shifted to put entirely different films in the lead. However, the thing to note is that, as far as BAFTAs are concerned, Best Picture “matters” a lot more than Best Director. But if you look at the following charts and observe how things shift when you fold in BAFTA, you can see that these voters do help push in contenders. Sometimes they don’t, as with Tinker Tailor Soldier Spy or Drive. Sometimes they do, as with Philomena, for instance.

But take a look at 2016, how Manchester by the Sea is the only movie that hits all of the precursors and yet still did not win Best Picture. Also look at how not getting a BAFTA directing nomination did not affect the outcome in either 2016 or 2015:

And, in fact, as you can see for BAFTA, SAG ensemble didn’t matter as La La Land won Best Film there anyway. The same thing happened the year before with The Revenant: 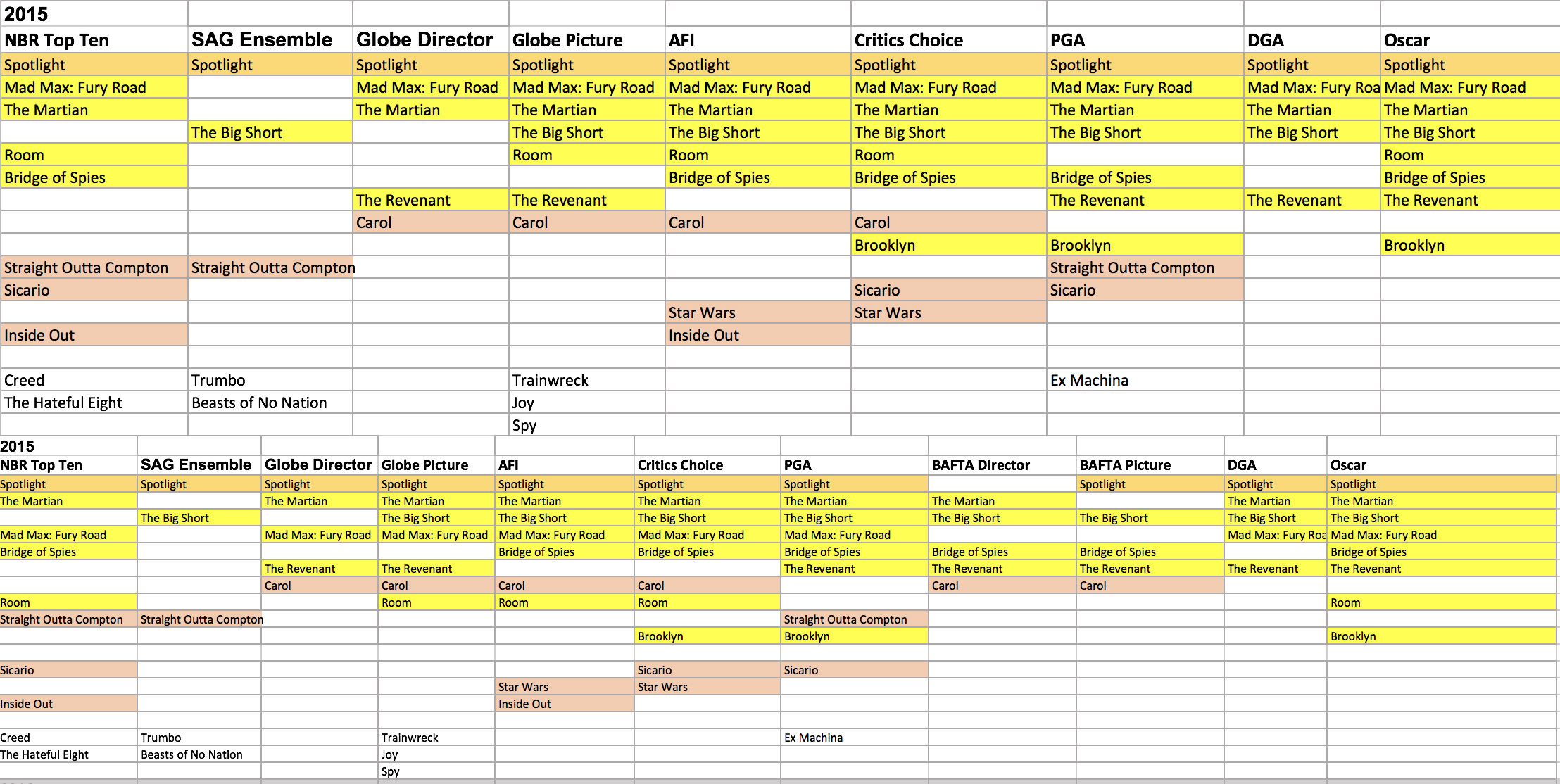 You can keep going further back all the way to 2009 and see these are the only two years that a movie won Oscar’s Best Picture while missing the BAFTA director nomination. The past three years have seen different movies win the BAFTAs and the Oscars: Boyhood, The Revenant, and La La Land all won the BAFTA but Birdman, Spotlight, and Moonlight won the Oscar.

What you want with the preferential ballot is likability across the board. Lady Bird and Get Out both have screenplay and acting nominations at BAFTA. They are clearly not hated. They may be just not as well liked as the other films, in particular The Shape of Water.

I’m still not quite ready to put all of my cards behind Three Billboards for one simple reason. When Best Picture and Best Director split, weird things can happen. Splits are mostly hard to predict, even for the most seasoned Oscar experts. I know, I tried to convince them that 12 Years was going to beat Gravity, that another movie would beat The Revenant (although I didn’t know it would be Spotlight), and that there was a really good chance La La Land would not win Best Picture based on it missing a key stat — SAG ensemble.

So why is this? Why are splits so hard to predict? Here are a couple of things to keep in mind.

Right now, voters will be hearing from Oscar pundits very loudly that Three Billboards Outside Ebbing, Missouri is your frontrunner. They will also know that Shape of Water is doing extremely well. Two films by one studio, both stories driven by women, both with hard-hitting messages about the current state of our country, our world. One is more broadly liked (Three Billboards) and one is considered more visionary and brilliant (Shape).

But Hollywood has a conundrum. Will the #MeToo movement cause enough of an upset that it greatly shifts how this Oscar race goes down? Many of those angry at Trump will probably be looking for something with more gravitas than the one coming-of-age story directed by a woman — and that, for voters, is going to be a conundrum. Both Shape of Water and Three Billboards feature a lead female wiping up the floor with the asshole men in the film. You vote for them because you root for them. For Lady Bird, voters will be voting for a film directed by a woman to win. Will that matter enough? It might. It really might. So for now, the cliffhanger continues. Onward to DGA on Thursday. 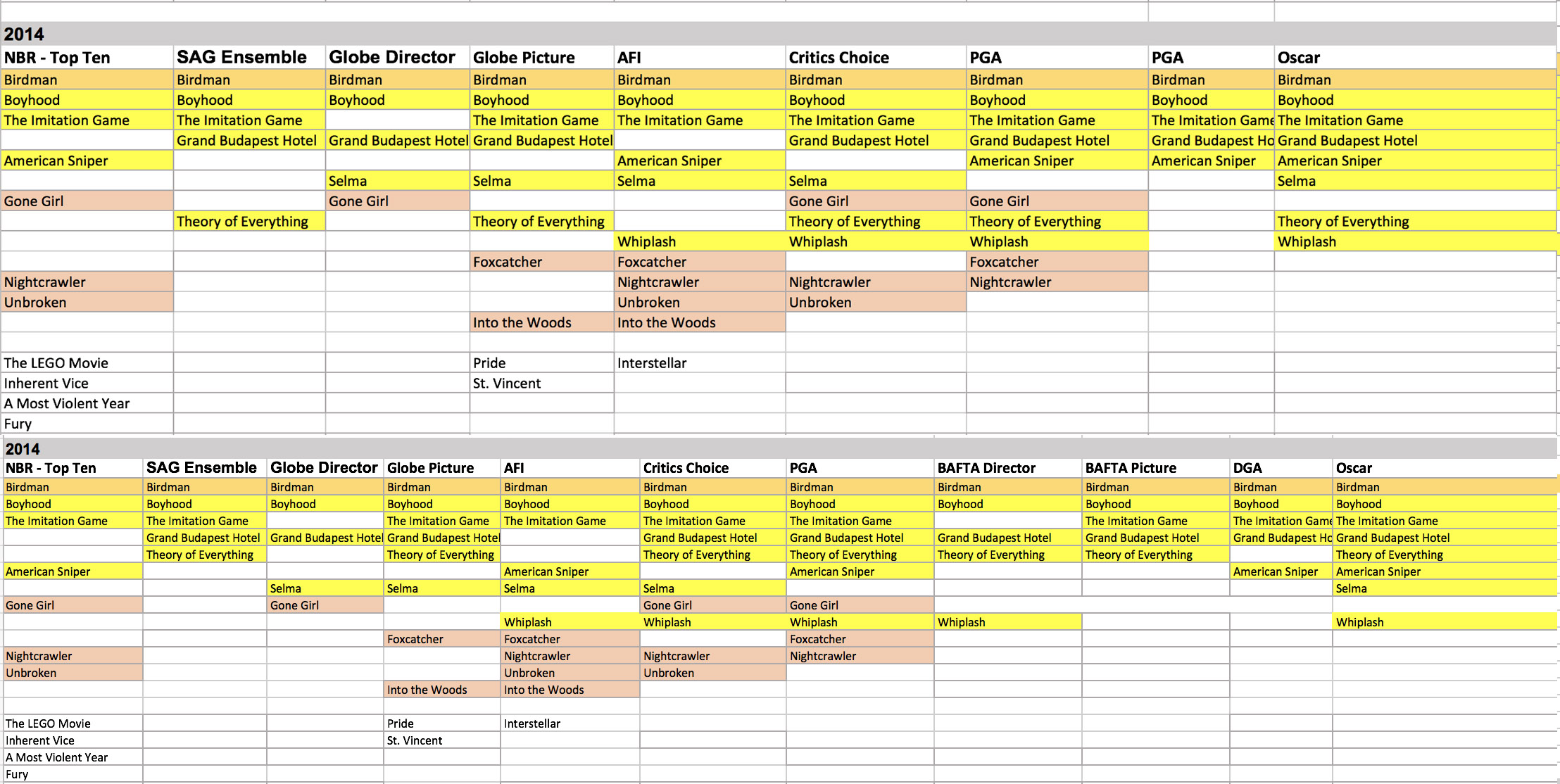