The Case for Christopher Nolan’s Original Screenplay for Dunkirk

by Robin Write
in ORIGINAL SCREENPLAY
2

With the weight of Dunkirk‘s award season run seemingly on the shoulders of Christopher Nolan’s Best Director chances, I wanted to bring forth a case for a Best Original Screenplay nomination. Too many dismiss the writing because of the scale and style of the picture, that it will harm Dunkirk‘s chances for Best Picture. Well, here’s why you ought to vote for the screenplay.

At the 1953 Academy Awards, the Best Original Screenplay Oscar went to Titanic. Forty-four years later, a new, bigger Titanic would swamp the show with the record-tying 11 Oscar wins. But significantly without even an Original Screenplay nomination. Why? Because on the very rare occasion that the writing awards don’t go hand-in-hand with the Best Picture winner, the Academy recognize the importance of the screenplay. It would have been so, so easy just to tick the box that says Titanic and be done with it.

Back in 1997, there were some huge contenders in the Original Screenplay avenue. And that was not always the case. The tide has turned recently, with a flourish of terrific original material, seemingly going head-to-head often. In the last eight years, half of the Best Picture winners won Original Screenplay. With two others nominated but losing out. In 2013 when Gravity won a barrage of Oscars with no Screenplay nod, they said it couldn’t win Best Picture with no screenplay nod. That “rule” will be broken again. 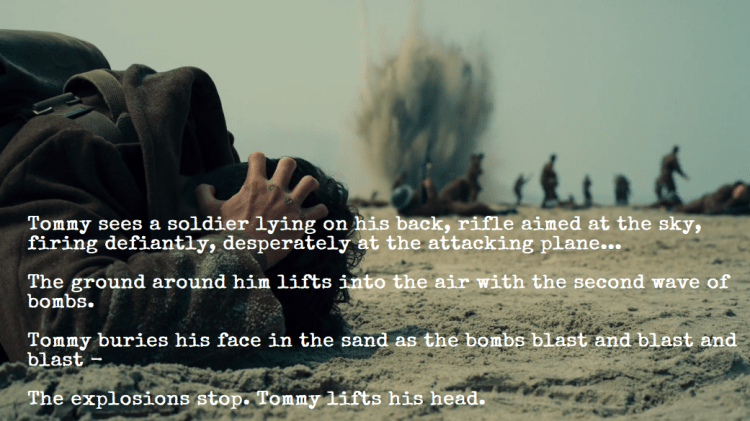 Christopher Nolan wanted to make a suspenseful motion picture, the story of survival, over any war film pigeon-holing. Rather than have soldiers talk about their wives or what they did back home, Nolan was far more interested in the perspective shift of allegiance. The kind of Hitchcockian narrative style. What was happening in the moment, rather than based on what you know about these characters. And in doing so ambitiously intertwining three time-lines.

It’s no secret, Nolan was a fan of some old war films, and wanted to not so much homage them, but allow him to greater understand the filmic platform for such films of human struggle. He had read the The Thin Red Line by James Jones, and considers Terrence Malick‘s 1998 film one of his all-time favorites. Nolan took on board, too, what the author Jones had to say about the reality of war, candidly spoken, and not just his depiction in the novel. Jones had a brash opinion about the writings of war-time from those that had not experienced it themselves. As well as an extremely close-to-Nolan’s-heart subject, the writer-director wanted to honor that very notion in his screenwriting.

All Quiet on the Western Front, the 3rd winner of the Best Picture Academy Award, was also a distinct influence for Nolan. The early scene from Dunkirk when boots are taken from a dead soldier’s feet is a hat-tip to that movie. Writing the script, Nolan was also mindful of those silent film mechanics, the way a story was told when perhaps you can’t hear the dialogue. Or there is little of it. And with the lack of attention for Nolan’s screenplay currently, I assure you it is integral, be it a blueprint, to the film’s appeal.

Unbeknownst to many, then, that don’t consider Christopher Nolan’s screenplay for Dunkirk to be worthy of a Oscar nomination, he busted guts reading accounts, watching documentaries, spending hours and hours with historical advisers, survivors. Many of which helped work on the film. Nolan wanted to import a true sense of the spirit of soldiers in that matter of life or death. Pulling it all together, with the very personal experience his own grandfather had. He died young in the war, and both Christopher and his brother Jonathan would visit his grave often during the making of Dunkirk. A poignant reality that would flow into his script. Their dad would be able to tell you the type of plane from just the sound of it going overhead – just like the character played by Mark Rylance.

Believe it or not, Christopher Nolan didn’t even want a script for Dunkirk at first. He just wanted to project his grand intentions onto the big screen. For a talented filmmaker who was oh-so close to Original Screenplay wins for both Memento (2001) and Inception (2010), this was a minor blip. Notably his brother Jonathan, thankfully helped sway from a no-script approach. You can’t ague with Nolan’s vision though. A true cinematic masterpiece, Dunkirk warrants some hefty praise for the screenplay, which has yet to be fully realized during this awards season.

Nolan’s script-writing was a rigorous journey. Even after his sponge-brain absorbed copious amounts of related research, there was so much to the craft of his pages. Even actors like Rylance gave their input. Nolan revised the script over and over. He writes with the camera very much in mind. And knew the kind of intonation and impact of music he wanted. Drip-feeding tension too, like the potentially damaged plane fuel gauge. Or waiting for the tide. He could hear the sounds as his very words transformed, the rattles, the bangs, the screams. Edging closer to the movie he wanted to make.

All the while Nolan maintained that he, his characters, would not explain everything that was happening during the course of the movie. Something he did in abundance in his films Interstellar and Inception. Those narratives needed it. Knowledge is overheard and assumed, during those life-threatening, horrific times the movie depicts. Nobody really knows, not even the high ranking officers. The events at Dunkirk were pivotal moments in the war. And those soldiers on the ground, at sea, in the air, had no idea at the time they would be making such a cornerstone of history. And Nolan imprints this in his pages throughout.

A further element of genius within Nolan’s screenplay is the three-fold narrative. Clearly imposed on the big screen for us (and in the script) as The Mole – One Week, The Sea – One Day, The Air – One Hour. And uniting those chapters incredibly. Believe me, the mechanics of those time-shifts, a Nolan trait, would have involved hours of scene-swapping. Nolan’s screenwriting journey was vast, even the ending his changed last minute. With the flaming plane from the original script closing the action, he went back to Tommy’s face. The look of personal contemplation at what had just gone by. Dunkirk is a superb screenplay of story structure. Nolan’s writing of action between dialogue is snappy, flawless, capturing so much of the ambiance of the humanity and dilemmas of war he envisaged so strongly. Even before he fully slipped on his directorial cap.

Editor-in-chief www.filmotomy.com - Based in the UK - Been frequenting AwardsDaily since God only knows.

The Case for Jennifer Lawrence as Best Actress in mother!