by Clarence Moye
in Interviews, Sundance
3

“As soon as he sent me the script for his newest film American Animals, I was so thrilled to be a part of it,” Nikitin gushed. “He’s a great director to work with. He’s intensely focused on detail. It’s kind of an exhausting experience, psychologically torturing as well. In the end, it works so well that you really don’t mind the process.”

Welcome to the Jungle

Starring Barry Keoghan and Evan Peters, American Animals tells the true story about four young men who blur the lines between film and reality. In an attempt to escape their ordinary suburban upbringing, they engage upon an audacious art heist of priceless Audubon prints and other rare books. A bit of a hybrid genre, the film offers dramatic storytelling with documentary style talking heads. The structure coupled with the multiple allusions to famous heist films in cinema history provided Anne Nikitin unique and challenging composing opportunities.

“It was a challenging film because there are so many layers to the film. There’s a lot of emotion, humor, and drama and some suffocating tension as well,” Nikitin explained. “There are a lot of nods to other movies as well because you have these guys living their lives through movies. We had to play along with this idea of a movie within a movie.”

Some of the cinematic influences on the new score include various contemporary heist scores like Ocean’s 11 and classic works from great composers like Ennio Morricone. The resulting eclectic score perfectly suits the eccentric film, born out of a close partnership with Layton. Their collaboration started early in the script stage, which perfectly suited Nikitin. The challenging material demanded ample prep time.

“I do prefer to start early as it gives time to experiment. Time to fix the score if it isn’t working,” Nikitin shared. “I was there from the script. From the very first assembling by the editor. It’s not your standard film where I would have wanted to wait for a locked cut. We needed all the time we were given.” 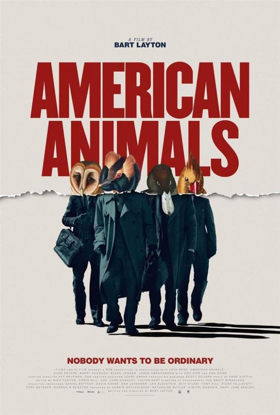 American Animals premieres at Sundance during the heat of Oscar season. Given the festival’s penchant for launching Oscar-buzzy films, it’s difficult not to mention the “O Word.” But a quick look into Oscar history reveals a shocking stat. You have to go all the way back to 2000 to find a female nominated in the Best Original Score category: Rachel Portman for 2000’s Chocolat. The last women to win Best Original Score was Anne Dudley for 1997’s The Full Monty.

So, why so few female voices in the composer race?

Nikitin doesn’t brand herself “a female composer” necessarily. Still, recently, she started considering what could be holding women back in the field. It’s a tough question to answer. In her 15 years working in the industry, she hasn’t fully encountered the kinds of sexism recently described by actresses working in the male-dominated film industry.

“The only hurdle I once had to prove was writing action music,” Nikitin laughed. “I was once asked if I could write action music and why women couldn’t write action music. So, I had to defend that one. Aside from that, I’ve never come across any prejudices.”

Still, Nikitin realizes her experience isn’t the same across the film and television industry. She’s hopeful, though, that things seem to be changing for the better. That a more inclusive film industry with more opportunities for women appears to be on the near horizon.

Tracy Letts of HBO's 'Divorce' Talks Coming Back from the Dead, Keeping Secrets from Molly Shannon