by Clarence Moye
in ADTV
3

The LEGION chamber will allow Fans to enter the mind of a sane man in an insane world. The exhibit opens at Goya Studios in Hollywood on March 30.

LOS ANGELES, CA (March 26, 2018) – FX Networks today announced the arrival of The LEGION Chamber, an artistic video installation inspired by the FX drama series Legion which allows fans to step inside a 360-degree micro-theatre featuring a one-of-a-kind presentation by the internationally-acclaimed Marco Brambilla Studio. Once inside, participants will find themselves disconnected from the outside world – literally – and fully entrenched in the hypnotic digital realm of Legion’s David Haller. Hosted at Goya Studios in Hollywood March 30 – April 1, this extraordinary visual art piece will take fans on a surreal journey through David’s altered states of reality forcing them to question what is real and what is not.

Legion, the acclaimed drama series from creator and executive producer Noah Hawley, will return to FX on Tuesday, April 3 at 10 PM ET/PT.

“Our aim was to create an experience that would take the viewer through multiple levels of Haller’s altered states of schizophrenic consciousness,” artist Marco Brambilla said. “A flood of moments, thoughts, and memories are reflected into fragmented mirrored surfaces, these kaleidoscopic reflections completely surround us and we have the sense of assuming the characters’ psychological POV. I produced ‘Fracture’ with THE MILL, the world-renowned Visual Effects & Design Company with whom I’ve worked with many times before. Working together, we were able to achieve start-of-the-art production values for this immersive experience.”

On working with Brambilla, Kenya Hardaway, SVP of Integrated Promotions at FX said, “We are excited to have Marco Brambilla’s amazing artistic piece, FRACTURE, to share with fans of Legion.  As admirers of his works, we believed his innovative style could present a new perspective on David Haller’s world.  FRACTURE, does just that – captivating the audience through a marvelous visual display.”

The LEGION Chamber hours and location details are below:

For more information on how to experience The LEGION Chamber, go to facebook.com/legionfx.

For more information on Goya Studios, check out their blog.

Based on the Marvel Comics by Chris Claremont and Bill Sienkiewicz, Legion is the story of “David Haller” (Dan Stevens), a man who believed himself to be schizophrenic only to discover that he may actually be the most powerful mutant the world has ever seen. 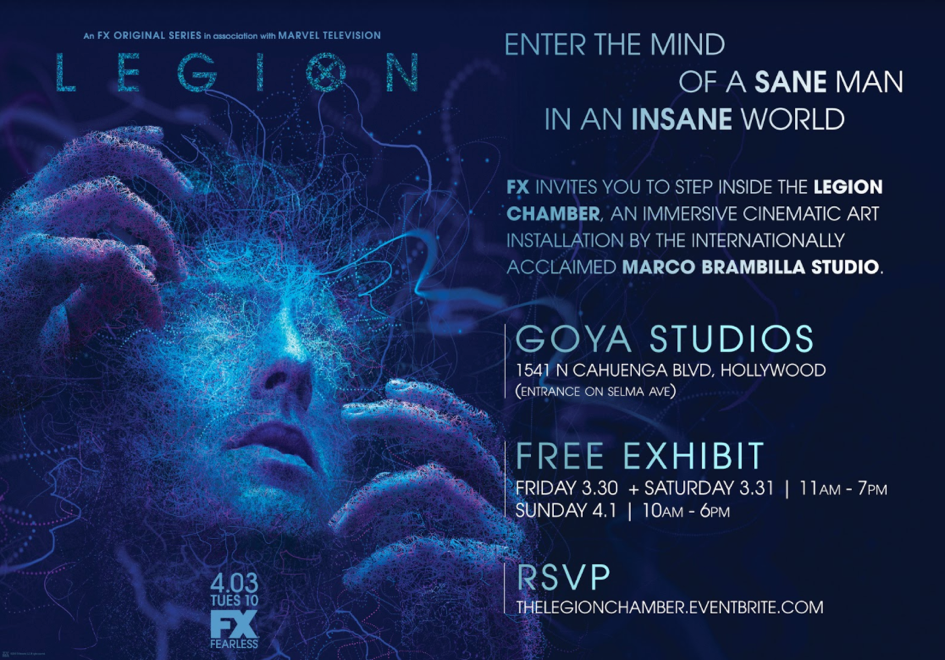 Trailer: The House With A Clock In Its Walls