Review: In A World Where Silence Will Get You Killed, A Quiet Place Is Terrifying

by Jazz Tangcay
in featured, Reviews
31

When was the last time you had a moment of silence and found it to be completely golden and sheer bliss? Now imagine a world where silence is a matter of life and death and the slightest sound can get you killed.

A Quiet Place is an excellent post-apocalyptic thriller where menacing aliens have destroyed most of mankind. The opening sequence wastes no time in setting the tone of the abandoned and isolated ghost town world where two children have survived with their parents (John Krasinski and Emily Blunt). Daughter (Millicent Simmonds) is deaf so the family has learned to communicate with each other through sign language. It’s probably the reason they’re still alive. It’s only a matter of minutes before the silence is shattered and we get our first glimpse of the terror that lies in store whenever the slightest noise can jeopardize their safety. From that moment forward, even we in the audience feel compelled to not make a sound out of fear for the characters’ lives.

Post opening credits springs us forward a few hundred days to find the mother Evelyn now heavily pregnant, her due date just around the corner. Husband Lee has set up a room in the basement with TV screens to monitor outside movement. Newspaper clippings and notes on a whiteboard outline what is known about the aliens and the terror the family faces: the creatures are blind, but if you make a sound they will find you and hunt you down. But, what is their weakness? Lee doesn’t yet know, and we don’t either.

The constructed world is tension-filled. Floorboards are marked with sand so as not to creak, the Abbott family is afraid to speak. Marco Beltrami score is calm as tension builds, the sense of dread mounts with each second. Hanging over this well-executed stillness is the pervasive realization that the Abbotts must prepare for a baby whose arrival will come with inevitable sounds to pierce that silence and wreak havoc on their lives.

We’ll leave any further plot details at that.

One of the things that makes A Quiet Place such an effective sci-fi thriller/horror film is its tight 95-minute runtime. Leaving no room for backstory, we don’t know how the aliens got here or who else has survived the apocalypse. None of that matters, since we’re focused on the Abbots and their survival.

Krasinski ‘s direction is terrific, ensuring that his film is gripping from the very first sequence. The jump scares arrive with bold control and the shocks are well-deserved. There’s no misleading trickery. It’s a straightforward suspense-filled narrative, a scary rollercoaster ride of a film that jolts you out of your skin a few times and terrifies the hell out of you.

A Quiet Place strikes a special chord because this is not just another monster movie. The family dynamics conveyed by the actors are outstanding, so we’re invested in them. This is enhanced by the fact that 15-year-old actress Millicent Simmonds is herself deaf. Every shot we see from her point of view is done in complete silence, adding to the pulse racing tension. She delivers a performance that strongly resonates. Noah Jupe is equally impressive as her younger brother and together this 4-person ensemble create a subtle but emotionally powerful sense of bonding.

Blunt gives an incredibly rich performance, as a mother who desperately wants to protect her children but never forgets to give them hope. We see how well-adjusted both the Abbott children have become to their situation despite the inescapable fear that exists in their lives. A tender moment where she teaches her son basic maths later plays out in a way that underscores her maternal instincts. 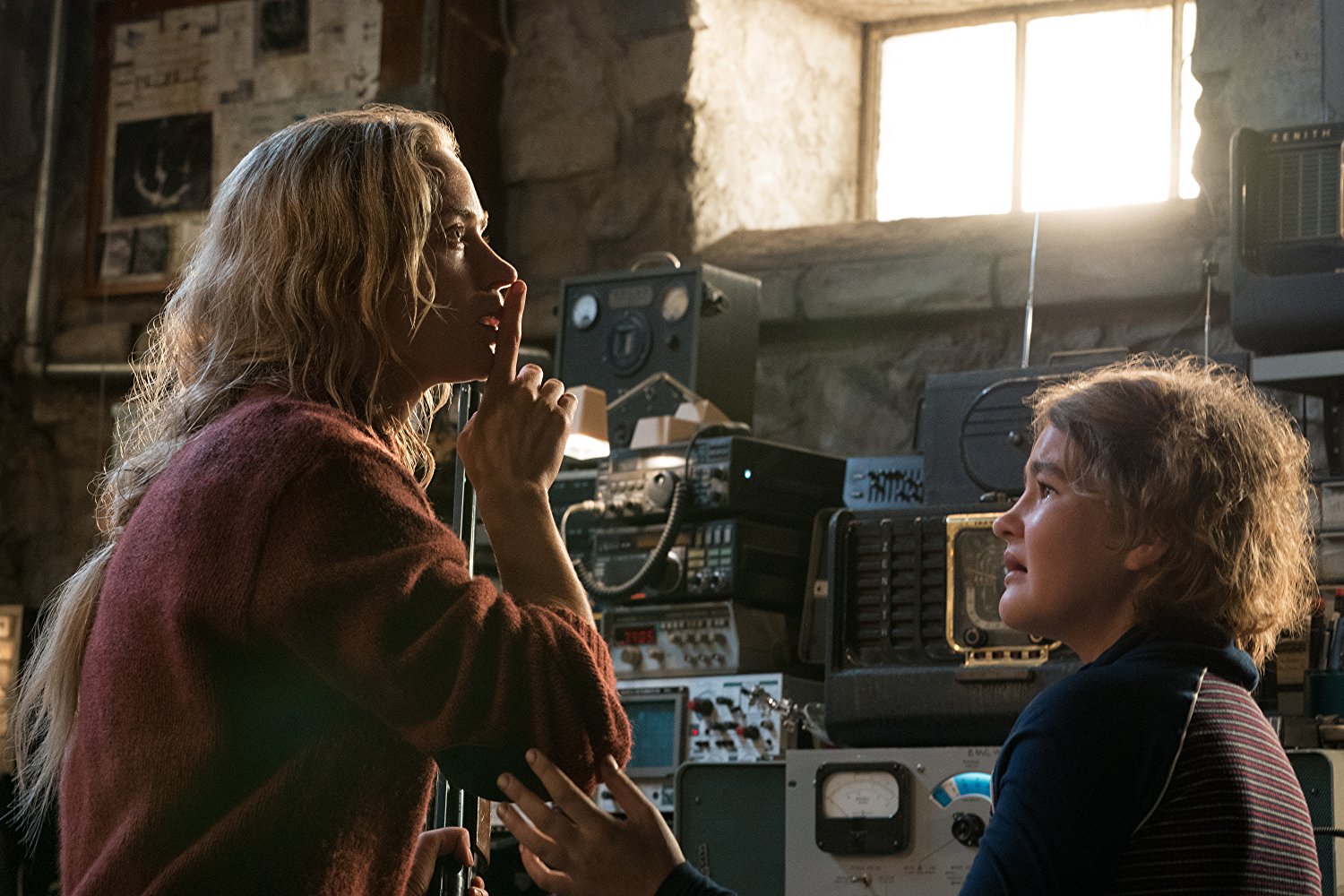 In its skill at using silence to rivet our attention and its awareness of how the absence of sound can drive suspense, the film is often reminiscent of No Country for Old Men. Inspirations from Hitchcock and even Jurassic Park can also be seen and felt, but A Quiet Place holds its own.

Charlotte Bruus Christensen’s captivating cinematography is simply stunning. Whether it’s vistas of the vast landscape of the isolated world where the old farmhouse sits, or tight shots inside the Abbott’s improvised bunker, her work repeatedly leaves us in awe.

The sound design is thoroughly superb. Its powerful impact is essential to the film’s effect, because while silence necessarily fills so many tense minutes, whenever sound is deployed it’s cranked up for maximum intensity.

ILM once again excels in the creation of alien monsters. When we do finally see them, they reveal “faces” that will haunt your dreams at night and continue to make your skin crawl long after the credits have rolled.

Though it’s only April, John Krasinski has already delivered a standout that seems destined to be one of the scariest film of the year, with an excellent cast and riveting narrative at its core. Stay away from spoilers and see A Quiet Place on the big screen with an audience.

A Quiet Place is released on April 6