To tell your story effectively, having a good title goes a long way, and EVERYBODY KNOWS is a great title. Two simple words, such suggestive power. In its blunt, sweeping reach, one senses both potential for comedy and tragedy, depending on whether you read it as a mischievous scream or a cold statement of fact. In the case of Iranian director Asghar Farhadi’s Spanish-language thriller, the phrase evokes something a note or two darker and niftily captures the air of suspicion hovering over a family torn apart by a kidnapping.

We first meet Laura (Penélope Cruz) as she arrives back home in a Spanish village to attend her sister Ana’s wedding together with her young son and teenage daughter from Argentina, where she’s been raising her family with husband Alejandro. More guests arrive, including Laura’s other sister Rocio and childhood sweetheart Paco (Javier Bardem), who now runs a vineyard with his wife Bea. Laura’s daughter Irene proves to be quite a wild soul and hits it off with Paco’s cousin Felipe (yes, there are quite a few characters whose identities and relationships to one another takes some time to wrap one’s head around) the minute they lay eyes on each other. A lovely ceremony ensues, then the festive reception. After a prolonged power outage during the party, however, Irene turns up missing.

Up until this point – about 30 minutes in – you wouldn’t have called the film a psychological thriller. Not only is the narrative distinctly free of any real tension in its portrayal of a cheerful, ordinary family. The understated direction also sends no sparks flying. Personally, I found myself wishing Pedro Almodóvar would step in and give the whole character introduction and wedding scenes, including a musical number, some much needed oomph and Latin flair. After the main plotline of the abduction takes over, however, EVERYBODY KNOWS becomes a very different movie with Farhadi’s trademark observant eye and passion for uncovering the human condition stamped all over it. Watching the intrigue gradually unfold, you remember why this guy has two Oscars.

The thing is, this film is a genuine mystery with skillfully structured shocks and revelations. Yet at the same time, the riveting whodunit also serves to expose aspects of the family dynamics most would be too uncomfortable to address and confront us with some cruel, sinister impulses we tend not to share. In this sense, it tells a universal story that could just as easily take place in Teheran, Toronto or Tokyo. Farhadi’s unique gift to weave human drama into the fabrics of a suspenseful narrative proves compelling even on foreign soil.

Many people are going to have problems with the film’s big reveal in its third act. And I don’t deny the moment a teary-eyed Laura makes a desperate confession to Paco does reek of soapy schmaltz. It’s the kind of scene where before somebody opens their mouth to speak, you’d think “Don’t go there, don’t go there…” and then they sure do go there. But the way this film resonates with me has more to do with how the characters react to all that happens instead of the plot points themselves. It’s their doubt, guilt, distrust, shame – all stealthily echoed by the apt title – that fascinate. As with A SEPARATION, THE PAST and THE SALESMAN, Farhadi demonstrates once again human nature is the greatest puzzle of all.

Opening the 50th edition of the renowned Cannes sidebar “Directors’ Fortnight” today, BIRDS OF PASSAGE by Columbian director duo Cristina Gallego and Ciro Guerra tells another, if completely different family story. With impressive lucidity and the occasional stylistic flourish, it recounts the rise and fall of a drug-trading clan from Columbia’s Guajira region over three decades.

It all begins when a young man from the local Wayuu tribe called Rapayet sees Zaida, a beautiful girl just released from her traditional four-year confinement to be declared a woman. He immediately asks for her hand but the girl’s family, headed by her mother Ursula, looks down on the unremarkable chap and demands a stupendous dowry meant to discourage him. Undeterred, quiet and clever Rapayat sees a business opportunity when he chances upon American hippies traveling to South America with the Peace Corps looking for weed. Together with his buddy Moises they strike a deal with local cannabis farmer Aniba and successfully set up a supply chain for the gringos. Through the next thirty years, Rapayat’s business would prosper, his family shared with Zaida would grow, and endless tragedy would follow.

Based on true events, BIRDS OF PASSAGE is told chronologically and without much fanfare. Co-director Guerra, whose previous feature EMBRACE OF THE SERPEANT was nominated for Best Foreign Language Film, largely foregoes the hypnotic mysticism of that film to pursue a clear-eyed, if still pointedly exotic, depiction of greed, loyalty and moral decadence and the result is chilling. Following a five-chapter structure, we see how innocence is lost, priorities changed and relationships destroyed by the curse of great affluence. Thematically it’s nothing we haven’t seen before, but the raw authenticity of indigenous filmmaking, the arresting visual design that adds poetry to scenes of ritual and carnage, and a superb performance by Carmina Martinez as the steadfast, ruthless matriarch Ursula turn this age-old tale into something enchanted, haunting. 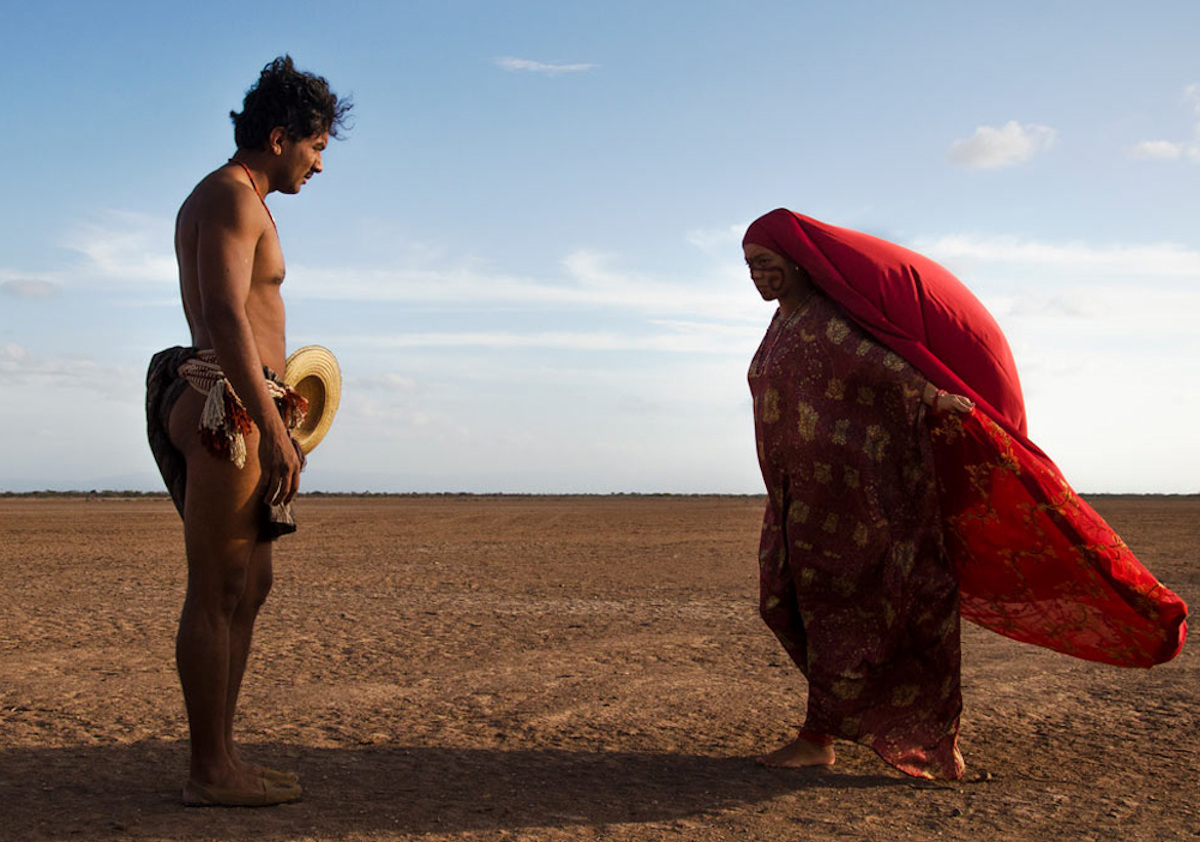