How do you solve a problem like Lars von Trier? An egomaniac, a presumed misogynist, an accused sexual predator, a self-professed Nazi-sympathizer and an undeniable genius, arguably one of the definitive filmmakers of our time? With his latest feature THE HOUSE THAT JACK BUILT, which premiered out of competition in Cannes, the habitual provocateur proves once and for all just how little he cares about what you think of him by basically owning up to every name he’s ever been called in a story that crosses all the lines there is to cross. It’s a savage, jaw-droppingly offensive portrait of a murderer that happens to also be vast, immaculately crafted, chillingly musical.

The movie opens in darkness. We hear the voices of the titular Jack (Matt Dillon) and that of an unknown Verge (Bruno Ganz) amidst the sounds of ruffled water. The two men are apparently on some sort of “trip” where, according to Verge, people tend to confess things about themselves. The circumstances of their conversation, which continues throughout and frames the entire film, won’t be revealed until the end, but sure enough, Jack gets to recounting his life as a serial killer right away. His tale, comprised of five “incidents”, describes crimes of escalating morbidness and cruelty. At first Jack the reluctant good Samaritan almost seems innocent as the clueless lady whose car broke down (Uma Thurman) keeps teasing him with misjudged banter until he snaps. By the end Jack’s pathological need to destroy has been so grotesquely fed it would take much more than smashing someone’s face with a jack to satisfy.

And what filmmaking it is. Von Trier, an individual who clearly, clearly needs help, describes the darkest recesses of the human psyche like nobody else. With BREAKING THE WAVES, DOGVILLE, ANTICHRIST, and Palme d’Or winner DANCER IN THE DARK, he shows us our basic impulses to exploit, humiliate those around us or our boundless capacity for despair. In MELANCHOLIA, he offers a portrayal of depression so realistic and unrelenting it is literally debilitating. With THE HOUSE THAT JACK BUILT, he delves into the human propensity for destruction, our unspoken fascination with death and comes up with something horrifyingly ugly. The horror doesn’t just come from the animalistic acts themselves, but how Jack, an eloquent, fiercely intelligent architect perceives and rationalizes his action.

Referencing carefully and extensively works of literature, music, science and other forms of human cultural expression, he asks us to consider someone who’s the opposite of a nutjob killer. He also makes sure this doesn’t end up a one-sided testimonial of a sociopath by the creation of the character Verge, who functions as the voice of reason, conscience or, in a sense, the viewer. Throughout the film, Verge questions the validity of Jack’s statements, challenges his motivations and rebukes his logic. The to-and-fro between the two drives the gruesome exploration further and sharpens the contours of a perverted mind.

Just as the writing, von Trier’s direction is clinically pristine and precise. From the use of the framing device, insertions of historical footage and animated interludes, to the staging and blocking of the murder scenes, everything serves a purpose that helps build a narrative that’s at once lucid and unspeakably nightmarish. The way the camera cuts between the faces of the perpetrator and his prey, studying the minutely changing atmosphere as the latter gradually becomes aware of their fate, is a masterclass in cinematic tension. And the ending which takes things to a level of mad, religious grandeur – in lesser hands likely to drown in cheap theatricality – feels truly immense.

On the other end of the spectrum of controversial filmmakers one can probably find Ron Howard, someone whose work seems as wholesome, decent, innocently hopeful as he probably is in person. Taking over from Phil Lord and Christopher Miller, his Han Solo origin story made its international debut on the Croisette last night and showcased a very different type of filmmaking skill.

This time around in a galaxy far, far away, young pilot-wannabe Han (Alden Ehrenreich) is on the lookout for hyperfuel coaxium in order to repay some debts and make a quick buck, so he can return to the planet of Correlia and save his girlfriend Qi’ra (Emilia Clarke) from a reign of terror. On his journey he meets, among others, Beckett (Woody Harrelson), Lando Calrissian (Donald Glover) and his loyal sidekick Chewbacca. Together they would pull off heists, fight some baddies, discover new friendships and fresh betrayals.

It’s not exactly fair to review a film like SOLO in a high-minded festival setting like Cannes. In fact it feels downright jarring to see Chewie & Co. on the same screen where you’ve just learned the horrific real-life story about women soldiers in the Syrian War or experienced the magical surrealism of Chinese indie cinema. For obvious reason people here are quick to judge anything that dares to please. But the truth is that tentpole blockbusters, especially one that carries the legacy of STAR WARS, are not easy to get right. Millions of built-in viewers expect to be served. They bring their whole families with them and expect everybody to be entertained. Fans can’t stand it when the mythologies they’ve known and loved is tinkered with while studios want original ideas to keep the billion-dollar franchise going.

Howard juggled these demands like the pro he is and delivered a thrilling ride that anyone can enjoy. The plot is admittedly not sophisticated or airtight, but it ably rushes you through an imagined world of peril and has enough self-awareness not to attempt to be anything else. The actors are well cast, especially the effortlessly charismatic Glover who steals every scene he’s in. Cinematography, costumes, choreography, production design and other technical departments come together nicely to create some massive and impressively smooth set pieces. Opening mid-action and never quite letting up, the latest entry in the Star Wars saga is a delightfully fast-paced romp with a twinkle in its eye. 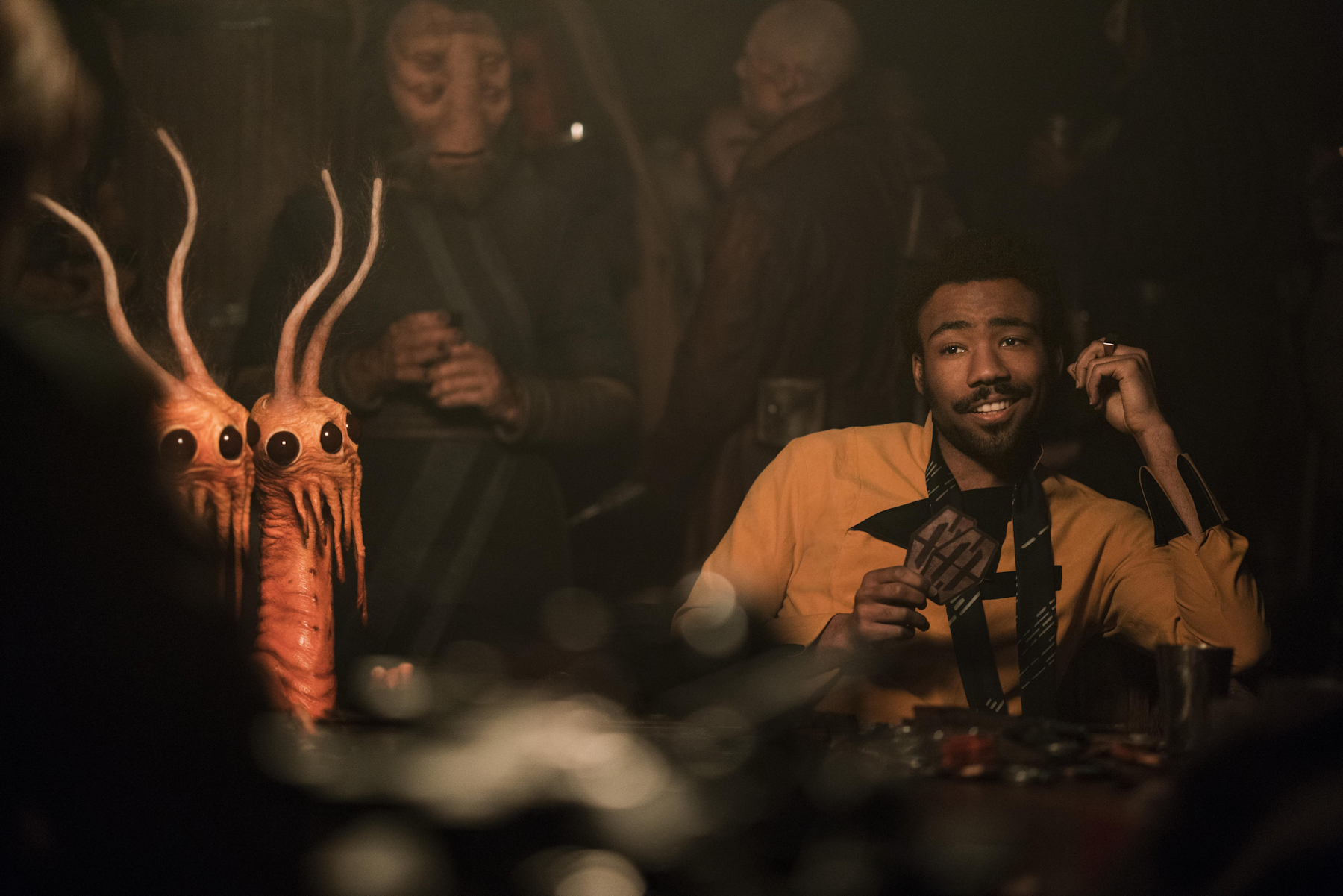