by Jazz Tangcay
in ADTV
0

Emmy voters were treated to a rare performance of “I Don’t Know How To Love Him” when Sara Bareilles performed at the NBC Emmys Jesus Christ Superstar FYC event in Hollywood last night. Bareilles who wowed audiences with her performance of Mary Magdalene was joined by Sir Andrew Lloyd Webber on piano.

Andrew Lloyd Webber was just in his twenties when he and Tim Rice wrote the rock musical. When asked what had influenced the show, Lloyd Webber joked, “Tim Rice should be the one to answer this.” The pair had just completed Joseph and the Technicolor Dreamcoat and it was Tim, after being influenced by a line from a Bob Dylan song suggested taking the story from Judas Iscariot’s point of view. Lloyd Webber said, “No one wanted to do it, but MCA Records in LA put up the money for Superstar” and the rest is history.

Legend, Bareilles and Leveuax all talked about their familiarity with the show. Legend told the audience he had grown up surrounded by religion so it had been familiar with it his whole life. Bareilles admitted she had been a life-long Andrew Lloyd Webber fan, and LeVeuax said, “I’ve known it since I was 13 and blew my budget seeing it at the Palace theatre in London.”

Talking about the electric live show that aired on Easter Sunday, Levaux said, “Our task was to deliver several hundred volts of humanity through the TV.”

With clips and live performances from Bareilles and Legend, Emmy voters were reminded of this absolutely live theatrical concert experience that was beamed into our homes on Easter Sunday. Seeing clips on the screen at the Egyptian Theater reminded audiences of just how incredible and spectacular Jesus Christ Superstar Live was. From the electric performances to the fine choreography to the outstanding set and production design, this show raised the bar of live television production and was spectacular.

If the audience reaction was anything to go by, this show was loved, the Emmy event was a hit, and expect to see Emmy nominations galore in July. It’s worth noting that if John Legend, Sir Andrew Lloyd Webber and Tim Rice go on to win Emmys, they will join the elite EGOT club. 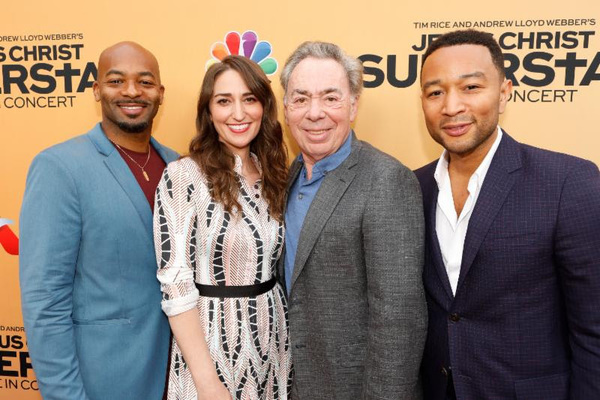