by Jazz Tangcay
in ADTV, Interviews
3

At the NBC press day earlier this month, we sat down with Auli’i Cravalho and Damon J. Gillespie to talk about playing teenagers and performing songs from ‘Spring Awakening’ on Rise.

The show is superb! It’s been so much fun seeing you go from the animated world of Moana to seeing you sing and dance on Rise. What is that like for you?

Auli’i: It’s really different. Voice acting is one realm and putting your emotion into body language and seeing how that translates on camera is another realm as well. It was really fun because I was thrust into the voice acting world without any other prior knowledge. That was really exciting. I was thrust into the acting world, but I didn’t take any acting lessons. So, it’s been really fun to see the first episode and see where I am now and these different things that I’m doing and how I’ve self-fixed and self-taught myself to get to the point where I’m at. It took about seven episodes to look at my performance and think, “I don’t hate that.”

For voice acting it came naturally, but acting on screen is something I can work on.

Damon, what was the pitch that made you say yes to the show?

Damon: I loved that it wasn’t so fun when it came to a drama club and department. It wasn’t about us doing jazz hands. It was honest and gritty and something that people in a working-class town still go through and have to go through every day.

Also, Spring Awakening is very close to my heart.

We’re pre-pubescent boys and we had to see it. I didn’t get to see it. I didn’t listen to the album either. Right before, my Sophomore year of college, I was cast in the show as Melchior. I did the show and it was where I met my fiance. After four or five years, I’m doing it on TV and I’ve always loved this show.

What’s it like performing the songs and revisiting it?

Damon: It’s really nice because I get to tell it differently. I was barely 19 when I did it the first time. Now that I’m older and I understand the material, I can do it differently and do it justice. I also come from the theater world, that’s right, that’s what you should do. It’s still so much fun as we have to go into the studio and record the songs. We also get to experience something new we have the earwigs and that’s all fun.

You sing live on the episodes, what is that like to have to be doing that?

It’s tough. We’re singing every song live. We do a studio version in case we do a montage on top of the piece. We record everything live as well, so there’s definitely a need for stamina in order to shoot all of your speaking scenes thirty or forty times and also sing the same songs over and over again, sometimes with choreography as well. You’ll see throughout the episodes, we’re growing as a cast and we’re growing as a troop. It’s honestly kind of hard because all of us want to put our A-Game and show a perfect performance in the pilot, but as we’re playing high schoolers who are working towards their show in the tenth episode, it’s really an interesting process giving some and then pulling back just so that our characters are able to develop.

On the subject of development, we saw your character’s growth what is that like seeing that week after week, particularly in that relationship with her mother. How would you describe that?

Auli’i: It would take more than a few words to describe that relationship. I think there’s a power play between Lilette and her mother. It’s like who’s the real parent in this relationship. We see Vanessa look to Lilette as a girlfriend and she needs someone to talk to and vent to whereas Lilette is really wanting a mother figure and wants her to step up. She just wants to be a kid and be in a play. She wants that first love. Instead, she’s worried about the rent and electricity bill and is plagued with all these adult topics that are true in real life. It’s beautiful to see reflected in the show.

OK, let’s talk Spring AWakening. What was your first introduction to the actual musical?

Auli’i: I knew of it before reading this script. When I read the script and tried for it. It seemed great and I didn’t read all the way through. Later as we’re filming, I read the rest of it and it got heavy really quickly. Damon is a wonderful co-star for that because thankfully we have an underlying friendship that is truly necessary for those scenes.

You do have such great chemistry and viewers are so invested in it.

Auli’i: It’s so true, the fanbase become so invested in the characters and the relationship. I’m just thinking he’s a good person and we click. I look to him as a great scene partner. We can do a goofy dance and we can do a Spring Awakening scene.

Damon: It’s been challenging because I’d never had the weight of a show where the story rests on you, in terms of Robbie’s story, not the whole show. Making sure I portray it to the best of my ability was a huge deal for me. I’d never had to cry on cue before. When we’re doing those episodes, I had to take a second. I tried the nose hair, menthol trick and nothing would work. I had to get to a place where I was so sad where I had no other option but to cry and you go on camera. It was challenging but it was so much fun and I’m glad I got to push myself that way.

What was your first theatrical experience?

Auli’i: I grew up in Hawaii and we didn’t have much theatre there. I was in a backyard play called The Story of Orange. I played a Godmother and I remember putting on my own tutu and a crown and I covered myself in glitter. I wasn’t sure if I’d remember if I’d remember any of my lines, but I was going to look the part. It was at that moment that I think I truly understood the term “Fake it ’til you make it” because this fairy Godmother was going to look so good even if she flubbed on every line.

Would you love to do Broadway?

Auli’i: I would love to. I also know I’ll have to do lots of prep work to get up to that. The vocal stamina is something I’m not ready for just yet, but give me a chance and I’ll try my best.

What are some of your favorite shows?

Auli’i: Waitress was wonderful. I haven’t seen Dear Evan Hansen. I’ve been in NYC and I’ve seen no amount of shows, but I am almost done with High School so my priorities are technically in order.

Auli’i: It’s really fun. It’s also really important that we do have high schoolers cast in high school roles. I don’t mind if my pimples show on the role. I was having a hell week on our show and if I see acne on my forehead, it’ll be real and shows the grittiness and the passion that everyone has for the theater.

Damon, how would you describe his relationship with his mom?

Damon: My mom is my best friend. I think it’s the same with her and Robbie. He would go above and beyond for her. The fact he’s slowly losing her is heartbreaking. To me, it’s something I’ve never had to experience. I feel I’m experiencing it in real life so when we do those scenes, I feel as if I have to put myself in that what if place and this actually happened? He loves his mom more than anything in the world?

What are some of your favorite numbers?

Damon: Totally Fucked. It’s evolved so much from the pilot. We get to do that number as if we’re in the show and it’s so awesome and so much fun.

Damon: We are having a great time. We all get along perfectly. We’re all doing what we love to do. We sometimes get a bit rowdy. Those theaters scenes are the longest days, we get a bit slap happy and loopy. My favorite thing was during the last episode, one of the guys put Cardi-B in our earwig, we were jamming to it and going at it, it was so funny.

No one knew what was going on, right?

Nobody at all. It was genius. 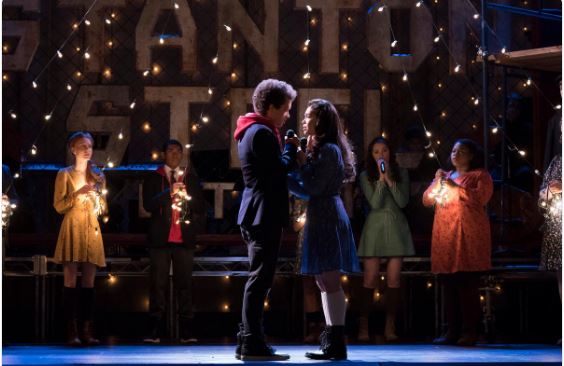