When Jane was released in 2017, it was without a doubt one of the best documentaries of the year. The intimate documentary looks at the life and works of Jane Goodall, serving to remind us of her great contribution and trailblazing work.

Brett Morgen’s previous works include Cobain: Montage of Heck and The Kid Stays In The Picture. Morgen takes us back to Tanzania’s Gombe National in the 1960’s where Goodall observed chimpanzees in their natural environment, restoring over 100 hours of unseen footage to tell the story of her groundbreaking work. The documentary is beautiful and at the same time absolutely astonishing as Morgen captures Goodall’s adventure, spirit, and interaction, but more importantly her research. It’s an outstanding reminder and Morgen talks below of the hours spent bringing Jane Goodall’s Gombe to life.

If Jane is nominated for an Emmy, Legendary primatologist and conservationist Jane Goodall could be nominated for her first Emmy for (Outstanding Narration for Jane).
Hugo Van Lawick, largely regarded as one of the greatest natural history photographers of his time (and Jane Goodall’s husband) who passed away in 2002, is eligible for posthumous nomination for cinematography.

What led to you going from Kurt Cobain to Jane Goodall?

At the time I was approaching Jane, I was seeking out a different type of story. For almost twenty years, I’ve been doing stories about men. It had occurred to me that I had never really profiled a woman. Everything happens for a reason and National Geographic had thrown ideas and they presented me with the idea of doing a film about Jane. Science was my worst subject in school. I don’t consider myself to be all that earnest and in a sense, it seemed the perfect subject.

I came into it with very little awareness and knowledge of Jane and so I came into it with really fresh eyes. When we approach films on icons or idols, we come in as secret fans. I came in wide-eyed and open into whatever we were going to experience. Shortly after, I came on board, National Geographic sent over the materials and at that point, it became clear that this was a film that had to be made. After reviewing the footage, I thought to myself, next to NASA, this might be the most important depository of 16mm films of the 20th Century. That’s for two reasons, from a scientific standpoint, the financing for Jane’s research began in 1958 and National Geographic got involved in 1960. So, this is something that National Geographic has been involved in supporting for over fifty years and is the longest animal research project in the world. What Hugo documented was something we’d never seen before and will never be seen again. It’s a woman entering the wild, befriending wild animals and living harmoniously amongst them. Secondly, it was all documented in 16mm by a man who was an absolute neophyte at the time and would soon become the world’s leading expert in wildlife photography. the cinematic achievement of Hugo’s work is equal only to Jane’s scientific achievement. The idea that these two neophytes walked into a jungle with no experience and would emerge as the leaders in a filed having discovered things that would change the way we view humanity. It’s a truly remarkable story.

On top of that, there was a love story about Hugo and Jane, but more importantly, about Jane and her work and Hugo and his work that I could easily relate to. Despite all of this, the film really seemed to resonate as we rolled it into the world at this really critical moment when people were examining the role of women in the workplace. Jane seemed to be perfectly aligned with the spirit of the times as an originator and someone who refused to be defined by societal standards of her day.

Talk about going into the National Geographic archives and how many hours you stumbled on?

Once we realized that the film was going to be a love story about Jane and her work and Hugo and his work. Every frame of this movie had to have been shot by Hugo. You needed to see, even if he wasn’t shooting Jane or animals, what we were seeing on the screen represented his passion. We went out to acquire every piece of film he had shot over his fifty-year career. There is no stock footage in Jane, every frame you’re seeing was shot by Hugo, except for Ellen’s interview. We found all that insect photography was shot for a never seen before 16 mm film back in the late 60’s. We discovered that in the vault.

The main footage came to us in fragments. We received 150 hours of random shots varying in length from 5 frames to 22 seconds, but nothing was longer. nothing was organized in any order whatsoever. Hugo had photographed 160 chimpanzees and nothing was identifiable by paperwork. We were essentially staring at this mound of footage with no notes and no one to guide us through it.

When you get lemons, you make lemonade.

When we didn’t have any sound, I knew we had to build the soundscape from scratch. If we had optical tracks, we might have waited a while. We created a sound room before we started telling the picture. For two and a half years, we created sound from scratch based on audio recordings from Gombe. That was as much a part of the movie Jane as was Hugo’s footage, or the score by Philip Glass. It was creating a soundscape that would allow the viewer to feel as if they were going on this journey with Jane. I think too often in film, we tend to think of it as a visual medium and lose sight of the power and authority that sound has in sound editing.

In regards to television, it’s a challenging medium because only so many layers of sound can come through a TV speaker. Most people are watching TV with a maximum of two speakers whereas in a movie theater we generally have seven or ten speakers. When I’m mixing a film for TV, it’s a totally discreet separate mix. I strip out a lot of the ambiances and try to highlight specific sounds so the viewer can achieve a similar experience as they would in a movie theater but in a way that is unique to television. 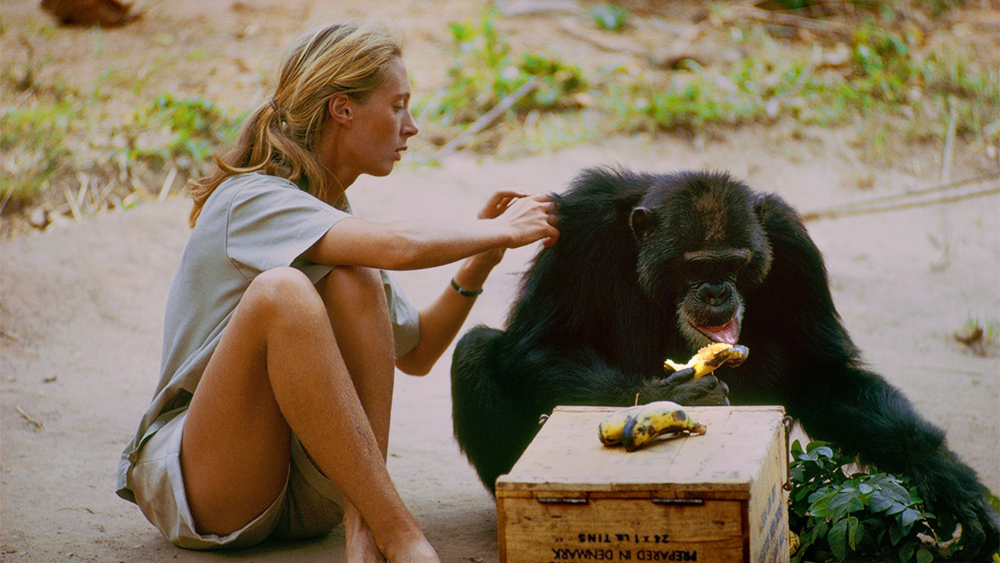 You talk about Philip Glass who is a terrific composer. How did you get him on board for Jane?

Originally, it was going to be a cinematic opera if you will. It was going to be Philip, with no narration just sound effects and music. I needed someone who could go from the first frame to the last frame and someone who could really invest each moment with the emotion and the drama that it needed. Philip is incredibly expensive and I approached National Geographic if they’d be willing to open their budgets a little bit and there was no hesitation. I think everyone understood the value of bringing him in and the synchronicity of these two icons who had both entered their ninth decade. It was really remarkable. To be there with the two of them was a really special experience.

Philip created a timeless score that captures the love that Jane has for nature as well as the love Jane and Hugo shared with each other.

Jane herself wasn’t in the first pass and she came into this much later. What changed?

The way we assembled the film. After I figured a way to catalog all the footage. With my last two movies, Montage of Heck and Jane, I decided to do the interviews after the movies had been cut. The main reason for that is so I can control what the lighting and the camera position is when a subject is speaking about a certain thing. I can have it be a reflection of what they’re talking about. In order to achieve that, you need to know where the interview will occur in the film.

Towards, the end of the film, Ellen Kuras and I went out with Bryan Burk to interview Jane. When she was first approached, she said, “You can do what you want, but don’t bother me.” We kept getting these messages from her and finally she sat down. The first question I asked if she ever got tired of telling the story and without blinking, she replied, “It depends on who is asking the question.” I realized at that point she was going to come into this as a reluctant narrator. If you’re looking for honesty in film, those are the best kind. Jane had nothing to sell us. There was no pretense to this woman. She’s so honest. There was never a moment when she said, “I don’t want that in the film.”

The stuff relating to Hugo was a little challenging as she hadn’t talked about it in years. At the end of the interview, we went our ways. Burk flew to Bournemouth to screen the film. She was reluctant was because she didn’t think there was anything original to do. She had no idea what we were intending to do. When she saw it, she said she felt it was the first and only time that Gombe was seen on film the way she had experienced it in the 60’s. I attribute to that to our guide which was her book, In The Shadow of Man. We were really embracing her view of nature and there’s a sense of magical realism that seeps through her writing that we inherited and tried to bring into the movie through colorization and synchronizing the animal movement with the music. We wanted to make it feel like we were walking into a wonderland because that’s how Jane viewed it and we wanted to capture that for the viewer.

Michael Kaplan Goes Back in Time to Costume 'The Alienist'