Ocean’s Eight: A Delightful Heist With Females Leading The Con

We start the week with Ocean’s Eight taking the number one spot at the box office, earning $41 million. Not only is this a bigger opening than the previous Ocean’s films, it also bumped Solo off the top spot. Ocean’s Eight is a heist movie with seven women headlining the cast. Let that sit for a moment. Sandra Bullock, Cate Blanchett, Helena Bonham Carter, Rihanna, Sarah Paulson, Mindy Kaling, and Awkwafina plot an elaborate heist during New York’s Met Gala. And it’s a jolly brilliant heist at that.

Bullock leads the band of thieves as Debbie Ocean, Danny’s sister. The film gives a lovely nod to its predecessors, but this is a film that shines as bright as the Cartier Toussaint necklace that they plan to steal off of Anne Hathaway’s neck.

Debbie Ocean has spent the last five years in jail, planning the robbery and the second she’s released she puts her plan into action. This requires she reunite with erstwhile partner Lou (Blanchett) and assemble her team to pull off stealing the $150 million necklace. Hathaway is the oblivious pawn in their game.

With a script co-written by Gary Ross and Olivia Milch, we are swiftly introduced to the characters. The women come from all different walks of life, but each is a smart and successful woman in her own right, the best in the business — though some have been out of the game for awhile. Paulson’s character Tammy has a family and kids, Lou runs a bar where she waters down the vodka, and Mindy Kaling’s Amita works in the family jewelry business. They’re all lured in for the challenge of pulling off the heist, and there’s not a man in sight, really.

Ross and Milch waste no time in getting straight to the point. We learn a little about Debbie’s backstory and how she ended up spending five years of her life behind bars and who put her there, but that’s it.

This is a female-led movie, okay, so Debbie has a grudge to settle on that score, but these women are fiercely independent. 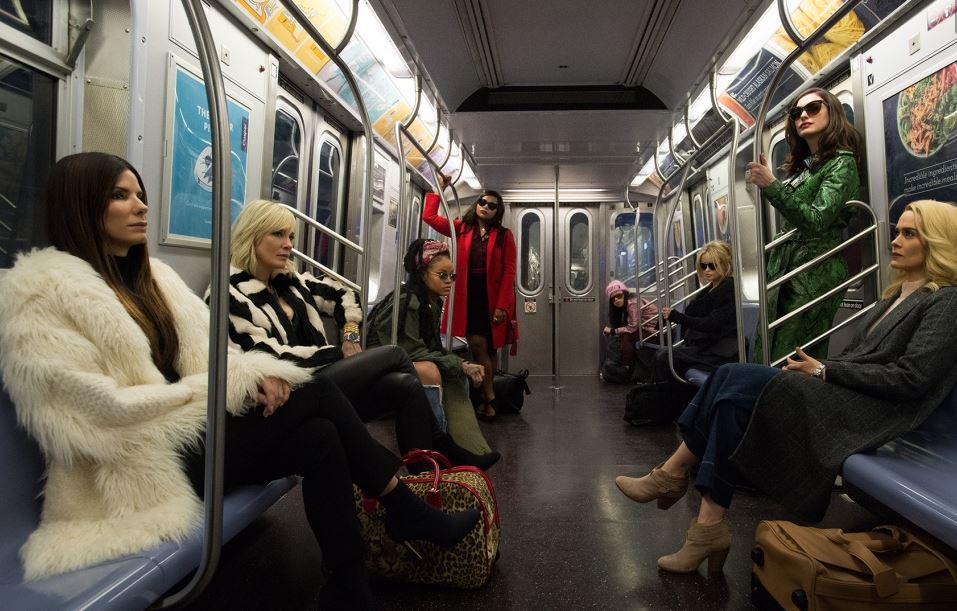 The casting is flawless across the board. It’s great to see Anne Hathaway as Daphne Kluger, the host of this year’s Met Gala. Hathaway is simply divine and delightful in the role that we can’t imagine anyone else possibly playing. Who else could play the vain Hollywood starlet with that beautiful neck? To see Bonham-Carter’s Rose Weil compliment her for having the best neck in the world — yes, that’s an actual line in the film — just might just be one of the most devilishly funny moment’s we’ve seen this year.

The fashion is stunning and Met Gala fabulous. The red carpet scene is filled with A-List cameos and Anna Wintour herself makes an appearance in the film. Whether it’s the sleek suits worn by Blanchett, or the overalls on Rihanna, the best hacker in the world who isn’t Russian, each outfit perfectly suits and underline their personalities. The Met Gala transformations of the characters are pure glitz. Kudos to Sarah Edwards and her work as costume designer on this film.

Ocean’s Eight is a thoroughly enjoyable heist movie and a fun watch without the need to see cars wrecked or explosions. Slick and glamorous, the film injects a new spin on the durable premise by casting females into the otherwise weary franchise, providing fun escape for two hours. Yes, women can lead a heist movie and pull it off without a hint of backstabbing or cattiness in sight. Bring on Ocean’s Nine and more Cate Blanchett and Sandra Bullock.