Interview: Erin Hirsh On Dressing Blake Shelton And Creating The Look of NBC’s ‘The Voice’

by Jazz Tangcay
in ADTV, Interviews
0

Costume Designer Erin Hirsh discusses the look of Blake Shelton and shopping in LA for NBC’s The Voice.

Erin Hirsh has worked on NBC’s The Voice for over nine seasons and is no stranger to the world of costume design. Hirsh tells me it was through her love for choreography that she discovered costume designing and that’s how she fell into her career. Since then, Hirsh has dressed Kayne West and Rihanna to name a few. Now, we’ll find her on the internet, or walking around LA with her team to find outfits to dress the contestants of The Voice. Read our chat below and learn what the Book of Blake Shelton looks like and consider Hirsh in you Emmy voting for Outstanding Costumes For Variety, Nonfiction Or Reality Programming.

For the sake of those who don’t know, tell us how you got into costume designer.

I literally fell into it. It was never an aspiration and I used to be a dancer. I had studied dance for years. I ventured into choreography and discovered Iiked clothing my dance pieces not knowing anything that my job today would entail but it was something that really excited me in the process of choreography and that’s how I fell into it.

The other thing, if I pull further back, my grandmother was a textile designer in the 30’s and 40’s and we used to have these in-depth conversations about color when I was choreographing. We were talking about the coordination of the color and the lighting. Those conversations were a spark of excitement. Between the two of those, that was my entry into costume.

You have a tendency to gravitate towards musicians, what is that attraction?

I was so comfortable with a stage type setting having had the career before so it always felt natural. I loved being able to push boundaries. There are no rules when it comes to costume design for stage. It just always felt organic. I just loved designing costumes for stage.

What’s your workflow for dressing both the judges and the contestants?

There are different phases of the show. We have the blind auditions and the battles and finally the live show. When we go into live, it’s warp speed and it becomes a matrix. Our lives shows are Monday and Tuesday and I get the creative brief on Wednesday. On Thursday we shop and get our resources and on Friday we’re in fitting, and finally, at the weekend, we’re in dress rehearsal for the Monday and Tuesday show. We only have 24 hours to do it. Whenever I have downtime, I’m scouring the internet or I’m working with my team to get clothes on these people.

I’m only responsible for Blake and the contestants.

That must make life easier.

The other judges have stylists and so it does because there are a lot more fires that need to be put out on the contestant side. 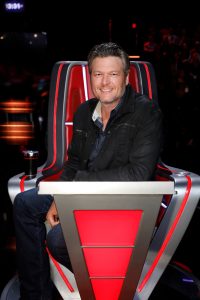 He’s quite tall and quite particular with what he likes. He only wears a certain jean. We don’t vary very much. We know what he likes and what he doesn’t like. Wardrobe is not his favorite thing, it’s something he puts on because he has to so we try to make the process as painless as possible for him.

If we’re doing a gag, he’s fine with it. Other than that we don’t vary from the book of Blake.

What is the book of Blake aside from the denim?

It’s denim meets John Varvatos. It’s rugged and not too structured. There are plaids and button downs. Over the years, he’s gone from wearing shirts with pockets to no pockets. He’s so simple with what he likes and he doesn’t like to fuss over what he likes.

How many outfits have you gone through this season?

Oh gosh, probably a few hundred. We have to get a few books on each person, so you’re looking at probably 600.

Where would we find you shopping?

We do LA and all the major department stores. We really shifted to online for the convenience and ease and not having to deal with restocking. We do a lot of stores, consignment stores and wherever we can get the best deal.

What’s the secret to shopping online? You know, when you shop online sometimes what looks good on a photo looks different to what you receive.

In the beginning, it’s hit and miss. You learn to lean on a brand and websites where you know the quality. We took a lot of risks this past season with Kyla Jade. Unfortunately, with plus sizes there isn’t a lot of great quality clothes being made so that was a lot of hit and miss. In general, we’ve been doing it long enough so we know where to go but we’re always looking for new designers.

With a show like this what is the collaboration process?

We get the creative brief and we sit down with creative producers who sit down with everyone, but really, for the most part, it’s led by the song choice. They will come up with lighting, color, and scheme and they’ll have an idea for wardrobe, so we have an idea to take from that. We can walk away thinking we’ll need a red tone to work with lighting and the set. As it’s a fast moving ship, we could be doing a fitting and the contestant could be sitting on a stool or walking down steps and suddenly can’t wear that outfit, so we have to pivot on a dime and the shopping is kaput and we have to figure out then and there.

Is anything off limits with when it comes to shopping?

Unfortunately, yes. As we’re a network show, we can’t push the boundary in terms of sex appeal that I could do with an artist. Sometimes we have to reign it in. We also have to be mindful of sound. Sometimes, there will be baubles so we have to make sure we don’t have a lot of sound from those.

Do you have a favorite look from the past season?

I did a collaboration with Ingrid Allen for Chloe Kohanski and it was fun getting to work with Ingrid. We used to work together on Kanye and Rihanna so to be able to hang out with her was amazing. To see it fit Chloe so perfectly was just a wonderful culmination of great creativity.

Bill Pullman Talks About The Sinner and That Connection with Cora.