Sonu Mishra On Creating The World of Genius’ Picasso

by Jazz Tangcay
in ADTV, Interviews
5

Sonu Mishra on Constructing the look of  Genius: Picasso

Sonu Mishra worked on Season One of National Geographic’s Genius: Einstein, but season two was a whole other ballgame. For this season, the show looked at one of the most famous artists in the world, Pablo Picasso. How do you create costumes for an artist who’s life was public, who had hundreds of photographs taken? Mishra started with research. She watched hundreds of documentaries, read books and looked at photos to understand his life. She was creating a look through the ages and how his interactions with women influenced his style and period. She also talks about the challenges of dressing actors who were in real life, taller than the subject. Read how Mishra constructed the look of National Geographic’s Genius: Picasso.

Where do you start when National Geographic says to you, we’re going to do Picasso?

Because he’s such a global icon and he’s such a complex man, and so controversial, I wanted to have an unbiased opinion, I spent my first ten days, just watching documentaries. I wanted to hear from the women and the men and get the different points of views and understand him and his style. I wanted to understand how his style changed from a young artist and how he started hanging out with

Amedeo Modigliani and how that influenced his style.

Once I was done with the documentaries, I started reading about him and started looking at photographs to build this picture. I read the script and narrowed down the information that I needed for our film.

Antonio Banderas was going to play Picasso. He’s very stylish and he is loved around the world. He’s taller than Picasso by at least four inches. I made suits where the jackets were slightly longer, looser and I used high waisted trousers to accommodate that difference. We had heavier fabrics. Picasso was very much like a matador, this strong, powerful man and the clothes needed to look powerful and imposing.

When Antonio came to Paris for the fitting. I had all these heavy woolen clothes made because we were about to head into winter. I wasn’t sure how a movie star would take these clothes. I also had these lighter clothes made from linen and the minute he put on these trousers, he put his hands in the mirror and said, “Yes, I feel Picasso.” He embraced everything. He was so passionate about the costumes and the evolution of how Picasso became famous. He knew he was the richest living artist and he was sure of his stature as an artist, so he started wearing fewer and fewer clothes. A lot of photos have Picasso in shorts and he’s bare-chested, that’s how sure he was of himself. He could meet the biggest art dealer and he could show up wearing shorts.

When we were shooting, we would time jump and we had to keep in mind all those aspects of filmmaking and that was the core of the filmmaking. We shot in four different countries. We had extras everywhere. It was massive, but we had this flow. I felt there was always a guiding hand with us.

You were dressing two Picassos. Talk about that.

Once I dressed Antonio and understood where he was with his costumes, I started blending that into the young Picasso. The younger Picasso starts off the same. Alex is taller than Picasso, so we used the same things that we did for Antonio.

His Picasso was in Franco’s Spain who came from a Middle-Class family. He goes to the art school and we had to incorporate all the different aspects so he was still in suits, but they weren’t fancy, they were the turn of the century. When he goes to Paris, he has this corduroy suit that Picasso wears. We had a photography and we replicated that suit.

Alex’s passage goes from art school, getting dressed up to fit into that society. Then he does the Blue period and then the pink period. That’s when he’s dressing like a work man. He had baggier trousers, wore a work man’s jacket and that was in contrast to what his rival, Matisse was wearing. Matisse was in tweeds and very gentleman dressing. He had those nice round glasses. He’d take the ugliness of the period and turn it into the beauty, while Picasso took the beauty and turn it into ugly. He used his art for work. His smock was dirty. Again, I replicated another photo. He had these pants with huge patches on the front and so I used those. When Alex ends up selling art and gets married, that’s when he starts dressing up and that’s another passage of time. He transforms from the bohemian world with dancers, models and sculptors to the world of ballet and Olga. He gets more flamboyant, it’s also the transition of the two actors too. It was almost like creating the before and after with the blend in between. When we see the change, I used the same coat, but it’s very subtle.

There are very specific periods around the stage of this artist.

Talk about the look of the women and their look.

His mother is the first woman. It was late 1900’s in Spain and her costume was dark. Black was very much a part of it. I recreated the bonnet for his sister Conchita.

Then he goes on to meet the prostitutes and that’s the dark side of Spain and we go into that. These women influenced him to become who he was. His mother, his aunt and his sister and these women all had this influence on the young Picasso.

We go to the models and I used golds and reds and blue. That was a specific palette. You see the women come into his life and how their costumes looks.

Eva comes from a well to do background so her clothing was elegant. When she dies, he meets Olga so I had a lot of tutus made for her and the actors in the ballet. I had a beautiful wedding dress made for her. It was a complete replica of early 1900’s wedding dresses. We see her world which is one around money.

He meets Marie, we replicated a lot of the Chanel costumes. Then he meets Dora who is a very powerful woman. She is very Avante Garde and looks like Annie Leibovitz. So, we moved into this strong, powerful woman look. He transitions to Francoise and the costumes change again for her. There’s a green dress. I made this gorgeous green silk evening gown. It’s so Grecian. Dora and she had very structured powerful looking outfits. Francoise was very feminine and soft. We play with silhouette and style.

The other thing we replicated was the famous photo of Francoise and Picasso on the beach. Later, there are the various stages of Francoise and what she goes through right up to New York. We did a lot with her character.

Jacqueline Roque comes in and we did her with headscarves. It was quite a
lot.

We had the parade with the king and the Queen. That was all high society. Women changed and their personality had to be represented by their costumes. Who is this woman and what does she mean to him? We had to keep a lot in consideration. 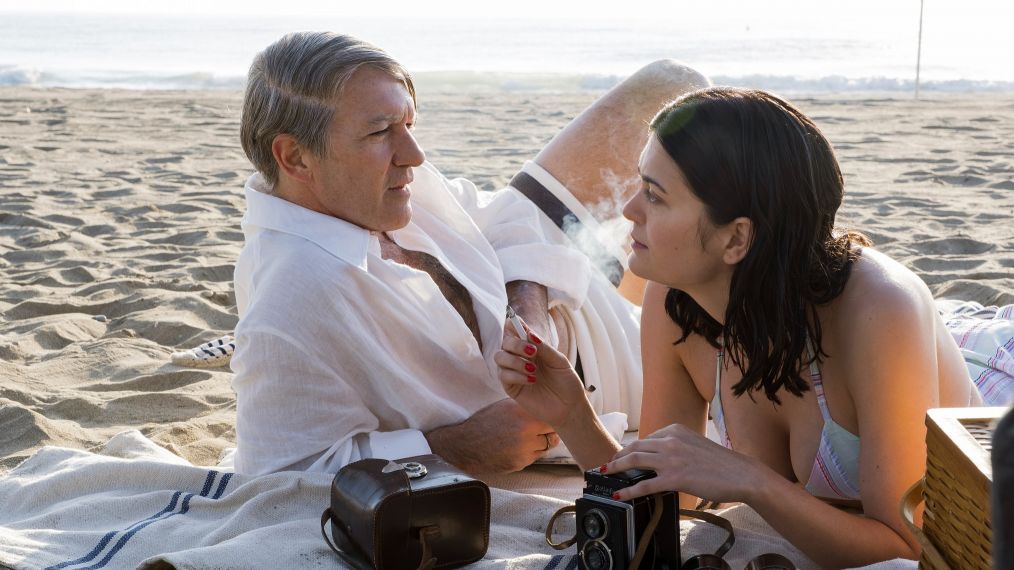