< Director Gus Van Sant Discusses Don't Worry He Won't Get Far On Foot - Awardsdaily - The Oscars, the Films and everything in between.
No Result
View All Result

by Jazz Tangcay
in Interviews
2

Jack Black as Dexter and Joaquin Phoenix as John Callahan star in DON'T WORRY, HE WON'T GET FAR ON FOOT.

Director Gus Van Sant had read John Callahan’s cartoon strips in his local papers. After moving to Portland, Van Sant also started seeing him around town. Years later, the late Robin Williams would suggest the idea of developing Callahan’s memoir, Don’t Worry He Won’t Get Far on Foot. The project with Williams would not materialize. After Williams passed away, Van Sant rethought the idea and casting. Immediately, Joaquin Phoenix came to mind, thus reuniting him with the actor from his 1995 hit, To Die For.

Fast forward to 2018 and Callahan’s story being told with Phoenix as Callahan. The film follows Callahan’s path to recovery after his life-altering accident. I had a brief catch up with Van Sant to talk about telling Callahan’s story, capturing his personality and shooting in 25 days.

What was it that made you want to tell John’s story?

In the beginning, he had written a story. I knew him as a local cartoonist and I knew a few things about his life through his cartoons. I knew them from the LA Weekly when I lived in LA in the late 70s and early 80’=s.

I knew his strip in the Portland Weekly. I actually wrote the original screenplay with the help of some writers because Robin Williams had bought the rights to the book and wanted to develop it.

The original impetus was to do something with Robin and develop it for him to star in. It was like an assignment. When it became available again after Robin was gone. I had to think in different terms and who would play John. I thought of Joaquin and asked him first before I even pursued it.

I worked on it on spec and wrote it with the feeling that if we handed it in, we’d be able to do it.

Did you know him when you lived in Portland?

I would see him around town in his wheelchair. He’d hang out at the Broadway Cafe which was a new place to hang out. It was a food court when food courts were new. I don’t think I talked to him except maybe a few years later. I think I ran into him at an art gallery but I didn’t really have long conversations with him because he wanted to talk to the ladies, not the men.

I love the opening of the film with the AA meeting and it’s such a great moment hearing those stories. Talk about shooting that scene.

Beth and Kim both had a certain number of lines that were part of the different episodes of the group therapy. I didn’t have in the script their own stories. John tells his story, but I didn’t have one for them so I asked them for stories. We’d have moments where we were recording their stories. Kim invented the story that she was telling. The thing with Beth, she was channeling her aunt and mother. I’m not sure where Kim was getting her story from, but it sounded like a Mary Tyler Moore story. She was this wealthy West Hills housewife. 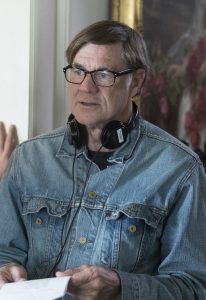 Another scene that was really impactful was the crash scene and how you shot that? Talk about your decision to not linger on it.

The script has the big crash and aftermath. We do have a special effect generated car crash. In the edit, I think I realized I didn’t need the actual impact, and that the impact was stronger if John himself described it. We have an early version of it, but that decision happened in the editing room.

Towards the end of the film, you capture his fun side and portray that when you show John racing with the kids and the skateboard.

He was mostly seen going down the street very fast. The two streets I saw him the most on were 21st Avenue and 23rd Avenue. There was a moment in history when they developed that street. It used to be a working man’s neighborhood without particular shops. Then they developed it and built up shops. He was still there going around at 20 mph down the sidewalk. You’d often see him whipping down the street and that’s the way I knew him the best going very fast in his wheelchair.

The skateboarder’s scene actually came from a picture I saw on the internet of him. He was on what looks like a ramp, but I think it was a driveway with skateboarders around him. I thought he was joining the skateboarders. I wrote the scene based on that picture.

You shot the film in 25 days. Talk about that and the pressures of working within that timeframe.

It wasn’t so much pressure because I’ve done movies that were done in 30-35 days, but I’ve also shot movies shot in 15 days. We were trying to fit into that budget and I thought if we go for 25 days of shooting, we’d hopefully save money. It’s not that hard to do, you have to be aware of the fact you need to move on and you can’t overindulge yourself. You have to keep a pace.

by Shadan Larki
1
No Result
View All Result