by Laurie Crosswell
in featured, Politics and Cinema
8

I wanted to get out of my home state South Carolina after the election, after Hillary Clinton lost, after Trump won, after my hope of seeing not only the first female president was dashed but my fear of an inhumane reality show host taking control of our country became a reality. Come February, I decided to relocate to North Carolina, a swing state, where I at least felt like I could make a difference in some respect.

Coinciding with my move to Asheville was the release of Get Out. I had been anticipating seeing Get Out for months, even convinced myself the movie’s title was a sign for me to uproot and move, and upon arriving in Asheville the first weekend in March, I made Get Out my premiere film experience as a North Carolina resident. The film’s dead-on depiction of racism was unfortunately right in line with the character of the newly elected Trump, who maintained that the innocent Central Park Five were guilty, to name just one of his many racist actions. Get Out was the horror of the Trump presidency come to the silver screen, a cinematic nightmare of the actual nightmare America was, and still is, currently living in.

I have found myself strangely drawn to horror films more than ever since Trump became president and apparently, so have audiences. Why is that? Because no matter how scary it gets, when the credits roll, the horror is over. A conclusion to the terror gives a sense of hope. We need reassurance that it’s all going to be okay, or at least end. The horror genre is serving as a catharsis for the real-life horror we face daily waking up to the Trump administration in control.

From Get Out to IT to Mother! To Killing of a Sacred Deer to Annihilation and Hereditary, look no further than the past year and a half of scary films released since Trump became president to find a film that depicts a current fear we face. Even the cerebral thriller First Reformed tackles environmentalism and explores how religion can be used as a buffer for corruption instead of an invitation for love. A Quiet Place, a film about a family hiding from unseen monsters who attack on sound, feels even more relevant with the Trump admin separating children from their parents. The villains in A Quiet Place attempt to destroy those who are too loud, and with Trump’s continuous attacks on the media by labeling them the enemy of the people, A Quiet Place serves as an accurate depiction of what it’s like to attempt to speak the truth in a Trump world. Mother! deals with how man’s ego destroys the planet, while Annihilation metaphorically exemplifies the fight of women to champion territory once only open to men. Horror has never been more on point.

Horror films have even flourished come awards time in the past year and a half, with Get Out scoring an Oscar for Jordan Peele and becoming a frontrunner for Best Picture. The only horror film to ever take home the big prize is 1991’s The Silence of the Lambs, which like Get Out, was released in February, a non-typical Oscar month. First Reformed and Hereditary have garnered early awards buzz. So why is the Academy scared to honor horror? That’s a whole other topic in itself. Here’s hoping that Oscar will see audience’s need for the genre more now than ever, when not only is a cinematic escape needed but a purgative one, when real life has become scarier than any imaginary one.

Sometimes, it feels as if America is currently living in The Purge at the address 10 Cloverfield Lane, the 2016 horror gem released the same year Trump would announce his candidacy. Even when we escape the clutches of the brute who has America locked in a bunker, we will have to deal with the aftermath of damage he has done. Healing will take time, and never have I been more grateful for the refuge and relief of film.

America will “get out” out of this, even if for the time being, it’s only on the big screen. 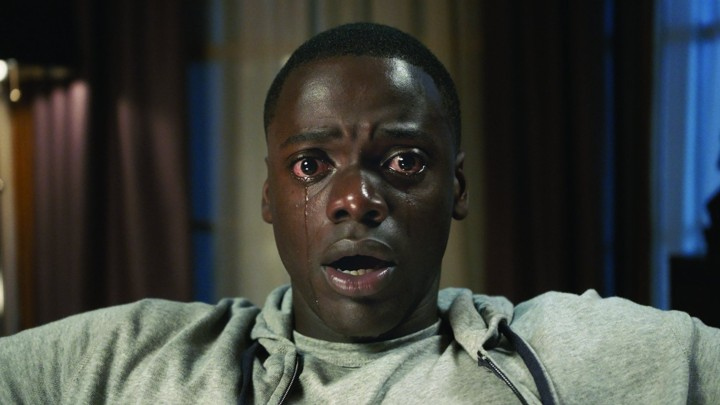 Mamma Mia: Here We Go Again! My My How Can We Resist You

Director Cullen Hoback Goes ‘Into the Storm’ to Expose Q