As Blindspotting goes wide in theaters this weekend, I caught up with composer Michael Yezerski to talk about how he captured the sounds of Oakland for the score. His score moves between contemporary Oakland inspired funk and delicate emotional cues. The band was comprised of players who hail from the Bay Area and Michael infused the sounds of the city (such as BART trains) into the music.

I love how you hail from Australia and capture the sound of Oakland in the score.

I had a lot of help. I wanted to give the guys a “co-produced by” on the score just because it was such a fantastic team effort. It’s like being in a band and screen composers don’t get to be in a band very often. By virtue of the profession it’s a solitary effort, but on this particular project, the guys were my spirit guide. They would guide with what sounded like Oakland and what didn’t.

I took a deep dive into the music history of Oakland before I started the project and when you read the list of luminaries that have come from that place, it’s extraordinary and humbling.

Talk about how you got involved and the conversation with Rafael and Daveed.

I had been brought on to the project by the producers, Jess and Keith Calder who I had worked with previously on The Devil’s Candy. I had turned that over quickly and on this film, they needed someone to turn it over quickly.

I had to get up to speed very quickly with what Rafael and Daveed wanted, getting into their heads really quickly and that was not easy. It was incredibly daunting. [Laughs] When you’re presented with this film which is a love letter to the city. It’s a city that I have actually visited many times. I have family in the Bay Area and we’d use to go out, but I can’t claim any knowledge of the place other than a rudimentary surface thing, so the first thing I did was take that deep dive into the history of the place and all the musical genres that come from there. It’s not just the hip-hop, it’s the Oakland funk. There are an extraordinary number of artists that come from there.

The other thing about a film score is that it can only be two or three ideas because it has to get under dialogue and blend and keep the energy going.

You talked about the film. One side of it is the score, you’re representing the sound with the city. The other side is the emotional psychological side, how do you tie it all in together?

In a way, the harder parts were the music that was the more energetic side. The psychological drama is presented in a way that’s more distinct. It’s more nebulous to nail the energy of the city and the place. There was a need for funk tracks under the beauty shop scene in that first sequence. How do you take the energetic sound, setting the tone for the first act and remain true to the sound of the city? It became about finding, not just melodies and rhythms, but also players.

Daveed and Rafael had hooked me up with musicians such as The Regiment Horns who worked with Justin Timberlake. They met an incredible drummer, John Mader who was in Hamilton LA and so there was a connection there. Josh Hari was the bass player, and they all helped me capture the sounds. I wrote the melodies and the musical ideas and they came together to help me execute it into a sound that felt of the place.

The film shifts into something more psychological. We’re looking at PTSD, the aftermath of the relationship between Collin and Val. It became about what is the simplest, but most beautiful and counterpoint for those things? What they call the PTSD scenes, it was a musical sound design where you take tones and elements of sound recordings that they had from the shoot of the BART trains and trucks and Oakland atmosphere. I took those and put them through a musical filter to create these swirling and rising textures for some of the more traumatic scenes in the film.

For the relationship scenes, Jess Calder heard one sound in one of the early cues. She gravitated towards it and asked what it was. It was a repeating keyboard motif and she asked if we could make a cue out of that. Whenever I do something like that, that to me is really exciting. That repeating sound became the key motif for the two scenes between Val and Collin. It was very spare, but hopefully, a poignant counterpoint to what’s going on on screen. 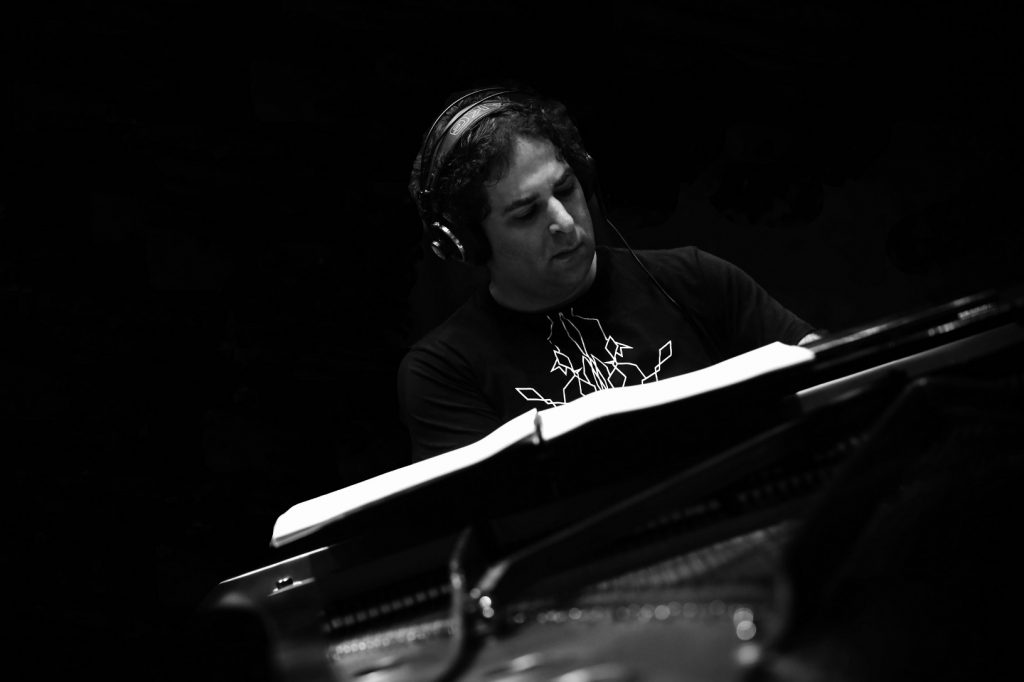 You mention John Mader who was in Hamilton LA, what was that like in the recording studio?

John is great. Daveed knew John. They called me during this mad dash to get it recorded so we could make the mix to make the Sundance premiere. They called me and said, “Michael, we found you a drummer.” He was pretty much hired on the spot. This was the level of trust we all had if they recommended someone, I was going to use them.

Two and a half weeks later, John turns up and kills it.

Let’s talk about some of the cues we hear. The jogging scene. What are we hearing there in that scene?

That’s what the guys call the PTSD thread of the film. Those cues are about taking the sounds of Oakland and breaking them down.

It’s about putting them through musical filters so they come out in a musical way. I’m mixing the sounds of Oakland traffic, the BART train with sounds that they supplied to me. When I started scoring the film, they gave me this folder of sound recording that they had done in Oakland. Rather than using these textures in sound design, which is, in a way more literal, it became a more figurative use of those elements.

The sounds are not designed to be, “Hey, that’s traffic or that’s a BART train” but it might trigger something subconsciously.

What about the STALKER M track and what we’re hearing in that cue.

When I started writing that cue, it’s one of the last ones I wrote. Keith said, “Oh, great, we’re up to one of the most important cues in the film.”

I always find it fascinating when a filmmaker tells me that about the film they’re working on because it grounds the story for me. This is, from a musical perspective, this is the deepest and darkest point of the film and everything has been leading up to this point.

I came up with this sound which was two sticks rubbing together. I put them through a musical filter and I presented that sound to the guys and it ended up being used in a few points during the film. Particularly, in that scene, you hear it coming in and out during that escalating heartbeat and then it becomes almost like this radioactive texture which is the screaming injustice of the scene.

Discuss the Streets of Oakland cue on the score, filled with Oakland funk.

That cue didn’t make the film. It was inspired by cue and the first cue I wrote in response to the film and hopefully, we’ll put that out in due course. That cue was the one that convinced the guys that I could do the job. That was my response to the deep dive into the job. This is an inspiring film to work on, and my first response to being hired is a suite or collection of melodies or some kind of artistic answer to the question that the film poses.

How big was the band?

The core band was the guitar, bass, drum section. I was doing the keyboards and sound design. That is pretty much the band. You break it down, some cues only need a guitar. The live instruments are definitely used in the first half of the film more than the second half of the film and that definitely represents the arc of the story where we are going from something light and energetic. It goes from the buddy aspect to scenes of psychological trauma. As we do that, we leave the live instruments behind. All the raw material that we gathered in the first section of the film is being used and recycled through distortions, and musical processes to break things down.

That stalker cue is the score at it’s most spare and most disturbing.

Blindspotting is on general release