< 'Handmaid's Tale' VFX Supervisor Brendan Taylor Breaks Down That Stunning Fenway Park Sequence - Awardsdaily - The Oscars, the Films and everything in between.
No Result
View All Result

Visual Effects Supervisor Brendan Taylor talks about creating one of the most incredible and ambitious images of The Handmaid’s Tale Season 2 premiere.

Full disclosure: I didn’t know the Fenway Park sequence in the second season premiere of The Handmaid’s Tale was done with visual effects. I thought that maybe Hulu sprang for an excursion to Boston to film a terrifying sequence in the iconic stadium’s outfield. Imagine my surprise when I learned that it was done with the help of visual effects supervisor Brendan Taylor and his team. You can view the reel on the Mavericks VFX website here.

Early in our conversation, I gushed that I thought the sequence was filmed in Boston, and he joked that I wasn’t the one who thought that. My error was something Taylor took pride in.

“On Twitter, there were people in Boston who said, ‘Stop filming in Boston! You’re ruining all our landmarks!’ Taylor said. “I took a little bit of joy in that.”

Upping the Size and Scope

The creators of The Handmaid’s Tale weren’t kidding around when they extended the world of Gilead beyond Margaret Atwood’s classic novel. At the end of Season 1, Elisabeth Moss’ Offred is thrown into the back of a van, but we don’t know where she’d headed. The second season literally picks up where it left off, and we discover that she is taken to Fenway Park for a massive hanging of handmaids. Taylor knew the stakes were raised and the pressure was on.

“We had to get it right. The scene is so emotional. When we got the rough cut, there were grown men crying. It’s such an emotional, beautifully filmed scene. The worst thing to have happen is to do it and not knock it out of the park–so to speak. If there was any break in the illusion, it would break the scene and Elisabeth’s amazing performance and Colin Watkinson’s cinematography.

If you watch it as many times as I have—I still get goosebumps—it takes the entire buildup of the scene. The intensity just builds and builds. If there’s any moment where the audience thinks the effects look a little janky, it breaks the buildup and the emotional payoff of the scene. What’s going on in front of the camera has to be forefront and we have to support them as much as possible. We had to be perfect to support the moment.” 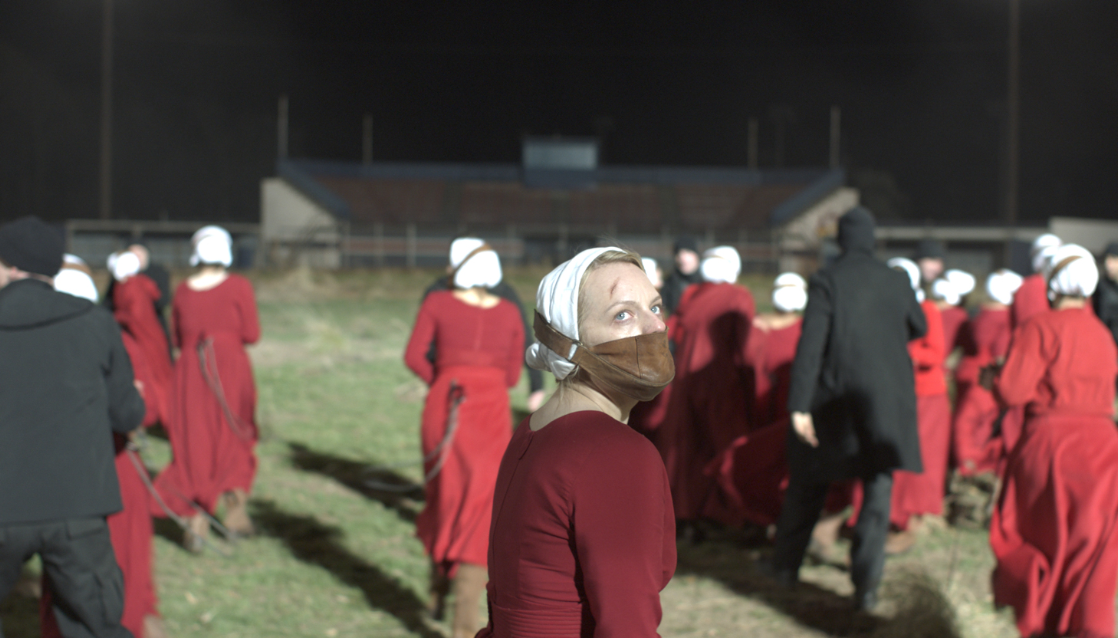 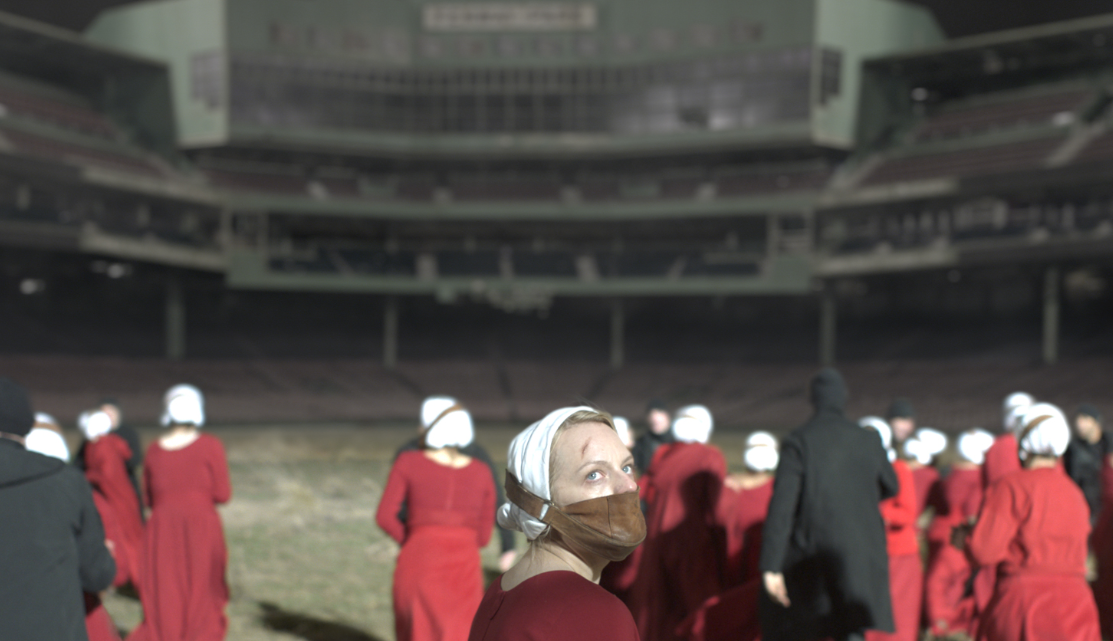 Taylor, a self-proclaimed baseball megafan, admitted that the scene actually worked as filmed. The visual effects enhance the story, because it offers a reminder that things everywhere are being destroyed.

“They needed to establish a little bit more of a carcass of the world we’re living in. What better way to do that than the national pastime and something that was played for years and years. Fenway is an iconic structure that anybody watching could recognize. It was a bold choice. When I got the call from the producer about how we were going to do this, I was like, ‘ohmygodohmygodohmygod!’ It’s a masculine sport. It’s male dominated and it’s very overbearing. Even the Green Monster and the press box looking over the field, you know? It does have this feeling of overbearing masculinity and the whole sport does.”

No Green Screen for The Green Monster

While some productions may just throw things together with actors filmed on a green screen (I’m looking at you, summer blockbusters), Taylor knew they needed to take a more practical approach to make it feel like you are in that field on that cold night.

“At one point there was talk about doing it all against green screen. I was very against that, because it’s not a catchall. It doesn’t fix everything. We needed the lighting, but most importantly an accurate sense of space. You can’t get that on a green screen stage, so what needed was to film on a baseball diamond. Colin and Mike Barker’s style of shooting is very handheld with steadicams with smoke and lights and you can’t get a big enough screen to accommodate what we wanted to do. Steven Lebed, the other visual effects supervisor, and I convinced them to shoot in the nighttime. The reason for that is twofold. First, we wouldn’t have time to move the green screens around but it was really important to both Mike and Colin to have that sense of space. So when Aunt Lydia is walking over the pitcher’s mound, we had to have Ann Dowd really walking over the mound. When June comes out of the tunnel, we have to see the press box with Fenway Park on the top. We needed to know as a team where everything was. That was really tricky.” 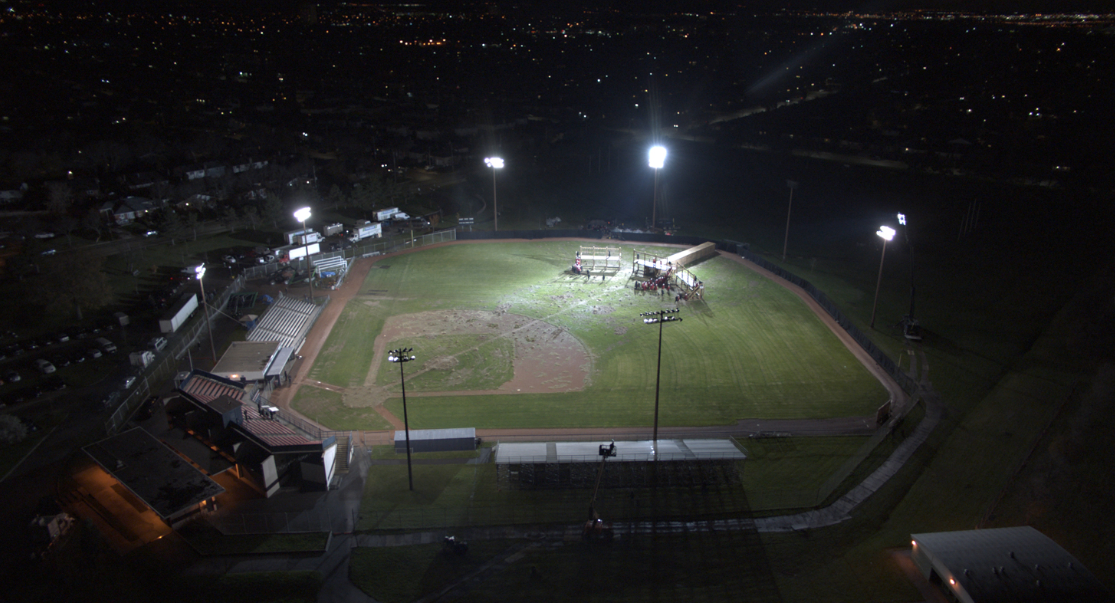 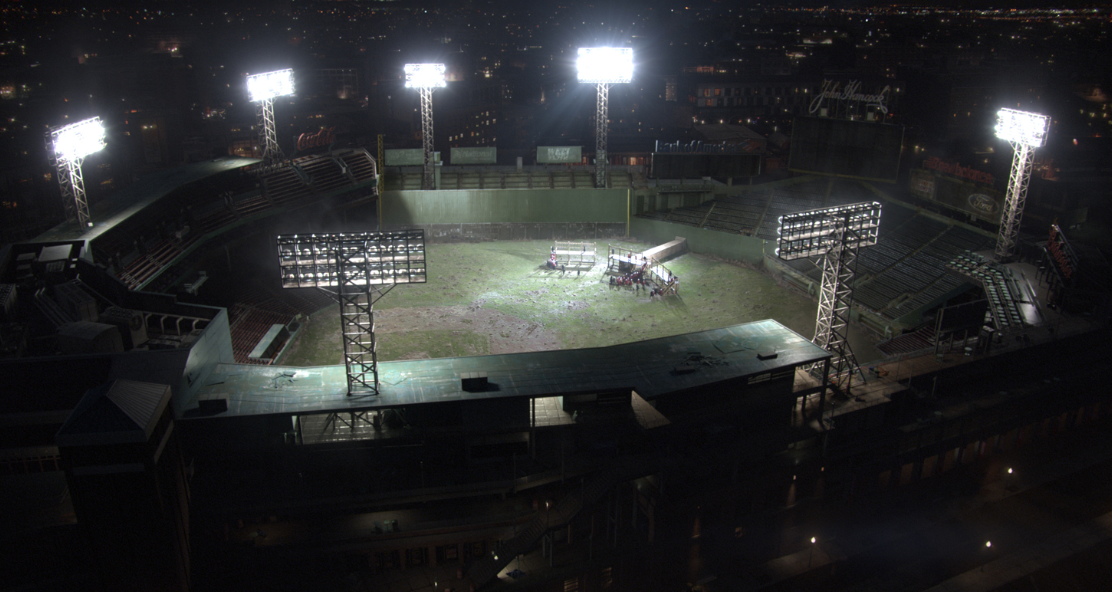 Filmed at a Bernie Arbour Stadium, a minor league baseball field in Hamilton, Toronto, Taylor and his team were able to establish the space easier by remembering standard rules of space on a baseball field.

“I knew if we looked back towards home plate at Bernie Arbour that the press box was between the two lights. We spected out to that degree and we put two 3D models on top of each other so we could tell. The great thing about all of this is that because we shot in a baseball park, the distance between home plate and first base, in a small Canadian minor league and the major leagues, is always 90 feet. So we could use that to triangulate all of our positions in Bernie Arbour and relate them to Fenway. Isn’t that wild? I love that the one constant allowed us to build from that.

We staked out where certain things were, like The Green Monster, and we had an app on our phones that had a digital model of Fenway. So we could look around at Bernie Arbour and have an overlay of Fenway Park with us. It was our job to be well enough prepared and it made out lives easier when we went into post because we knew we weren’t cheating anything. It took out all the guesswork that would have killed a lot of time. We were never guessing.”

After filming the emotional scene, the team was then tasked with making sure the details were top-notch. Taylor commented that establishing the space gave them a great advantage to fine tune the colors and environment in post-production.

“We had to take a team down to Boston to shoot Fenway Park. Because where we knew all of our camera positions and the 90 feet element, we could figure out where we had to put all the cameras. So we went down and shot a bunch of panoramas everywhere. The team shot for 8 hours with full support of the Boston Red Sox, which was amazing. We brought it back here and did layout. That process is basically building a low-res model of Fenway Park and putting it into each of the scenes. It looks rough.

From there, you take your photos and put them on a CG model and insert those in and every time it gets a little bit better and a little bit better. Part of the trick was matching the stuff in the background. We never wanted to take from stage. We had a few moments like with the flyover shots and the big wide shots but for the most part, it was to add texture to the background. You want to make sure you match the blurriness and darkness. We had something to do in 87 of the shots.” 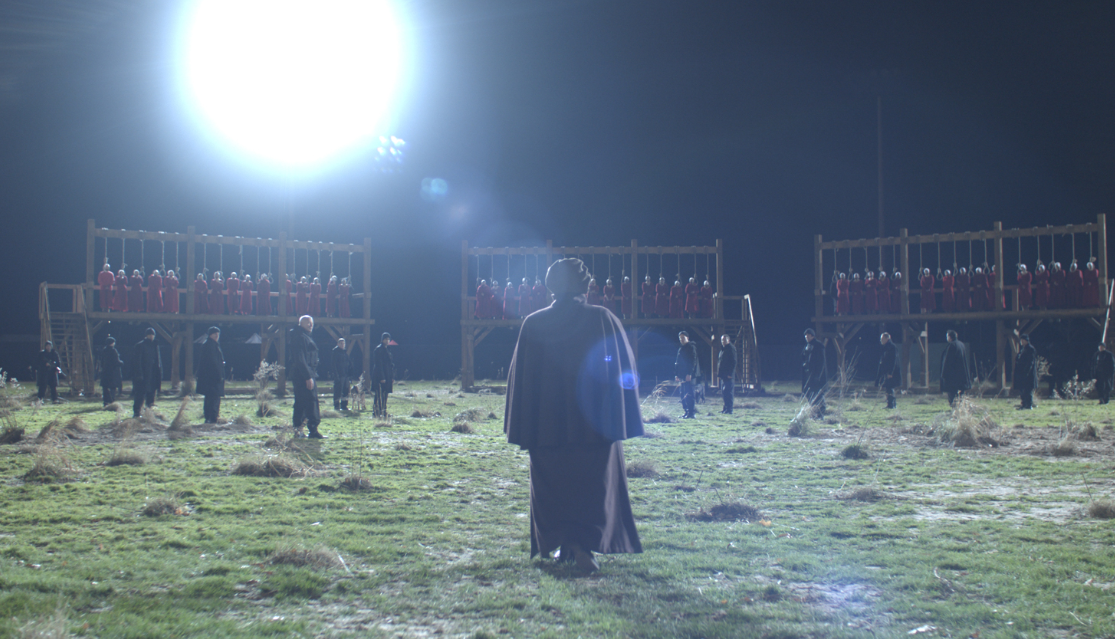 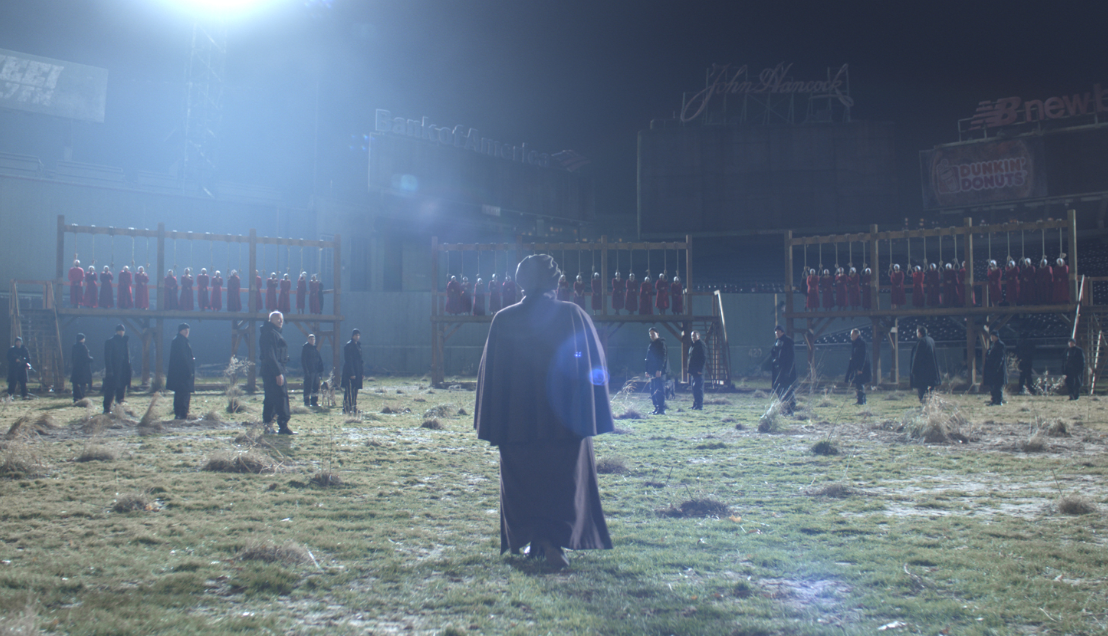 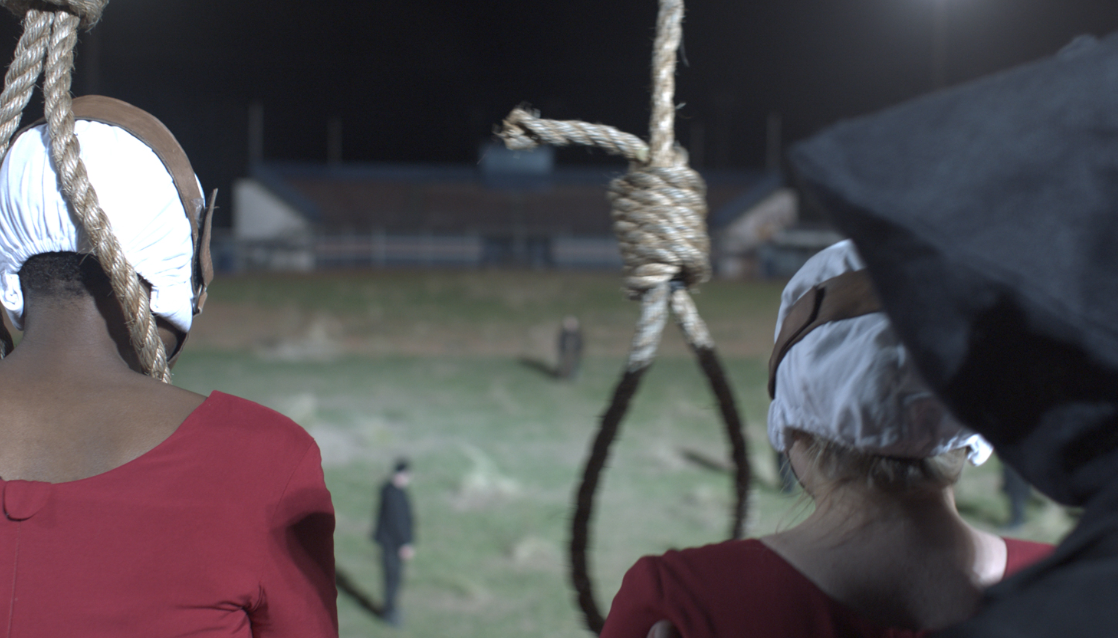 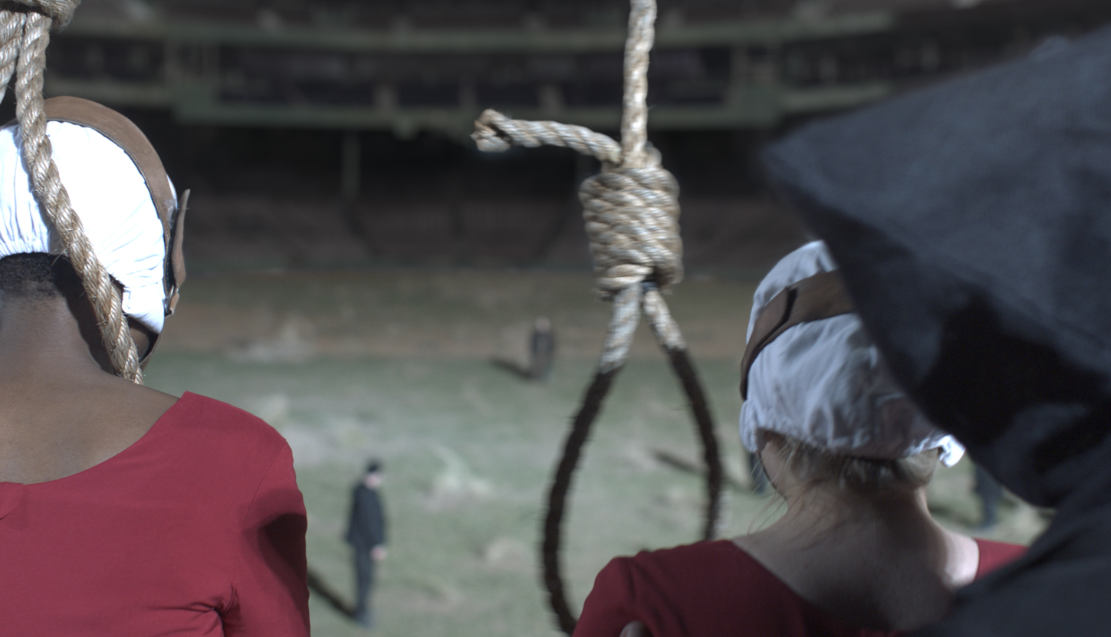 There was a lot riding on the second season of The Handmaid’s Tale. After winning the Emmy for Drama Series last season, a lot of audiences were wondering if the sophomore season would be as good as the first. It ups the ante, for sure, and that’s because the creative team behind the camera were concerned with presenting a quality second season.

“It really helps when you’re doing work when you feel it actually means something or it affects people rather than do something silly. It means so much more to know people are counting on you to do this. The material is so good. I would watch the sequences on our screens because the story moved me so much.”

The emotion Taylor felt is transmitted into his work on the Fenway Park sequence. It’s a meticulously produced sequence that only enhances the drama and terror. This world is broken, dirty, and desolate, and this stunning sequence reflects that.

Both seasons of The Handmaid’s Tale are streaming on Hulu. Taylor’s work can be seen in “June,” the first episode of the second season.

Joey is a writer and father of two fur babies. He currently lives in Columbus, OH. If you would like to talk to Joey about cheese or Julianne Moore, follow him on Twitter or Instagram.

Predictions Friday - The Oscars on the Eve of Telluride