From the opening musical number to the big awards of the night Jalal Haddad takes a final look at the 2018 Emmy Awards.

Organizing an event like an award show can be a difficult task with so much to be determined until the envelope is opened. Last year, after a strenuous political season, the Emmys rallied behind two female driven socially conscious shows that became the rallying cries of the Television Academy and with them the themes of the night were born. This year our political and cultural climate is even more complicated and the crop of winners brought no overall consensus.

Still there were a lot of reasons to celebrate. The final season of The Americans won two awards. After being forgotten last year Thandie Newton and Claire Foy won their first Emmys for two seasons of extraordinary performances. Regina King gave one of the most honest and emotional reactions in what might turn out to be her Oscar audition.

The past year has produced a record-breaking amount of television. In fact there has been some pushback to peak TV with some arguing that there is simply too much television. So why is the Emmy pool of winners so limited? Only four networks won Emmys in the drama, comedy, and limited series categories – HBO, Netflix. FX, and Amazon Prime. A lot of networks went home empty handed including NBC, USA, Hulu, ABC, and that’s not even counting the networks that failed to be nominated. Every show can’t go home a winner but this will be an interesting trend to track in the future and see if voters are limiting in their decisions on what to reward.

One of the biggest conundrums with the new voting system is whether or not vote splitting is a legitamative factor. Some years it clearly isn’t like last year for example. This year it clearly affected The Handmaid’s Tale, Game of Thrones in directing, Atlanta, and the cast of The Assassination of Gianni Versace.

When The Handmaid’s Tale and Big Little Lies swept through last year’s ceremony it was directly after the recent election, the women’s march, and it was right before the Me Too movement became prevalent. Those wins were extremely vital to the moment, however Emmy voters weren’t as keen to send that same message this year. Instead they chose firmly chose to go in a different direction with The Marvelous Mrs. Maisel. The period comedy doesn’t grapple with the abuse that the other two series deal with and instead showcases the story of a woman paving her own path in the entertainment industry. On top of all that it was helmed by Amy Sherman-Palladino, someone who has worked in television creating some of the most popular shows in recent years.

In the end the best moment to encapsulate the evening was probably the long-awaited win for RuPaul’s Drag Race. After being greeted with a standing ovation RuPaul led the audience with his mantra that has guided the show for ten seasons: “If you can’t love yourself, how the hell are you going to love somebody else?” With the audience chanting amen! 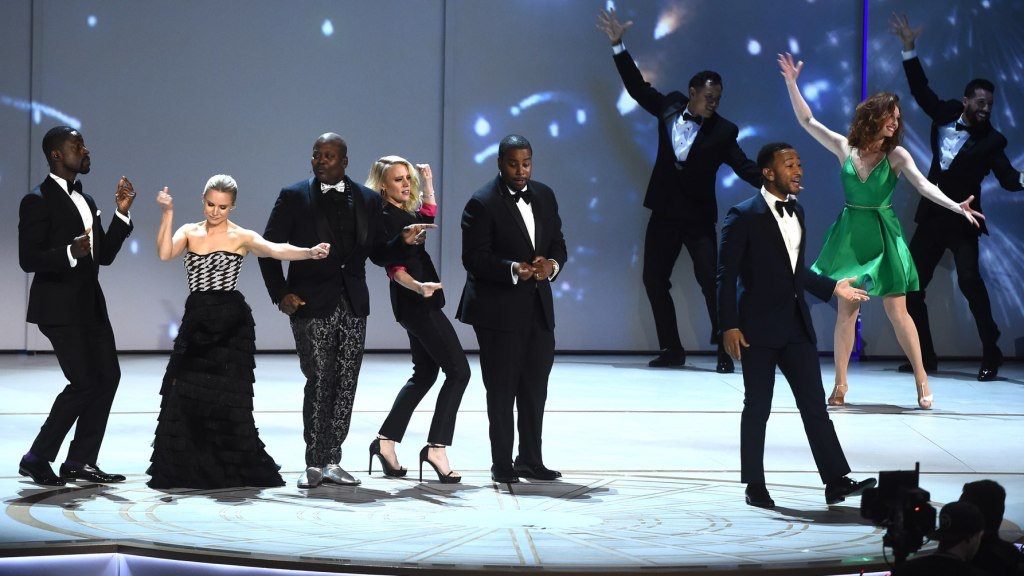 Award shows have become notorious for going deep into overtime. Various groups have tried various ways to tighten the ceremony but over time they’ve become accepted for what they are. So no one predicted that this year’s Emmy ceremony would actually run so smoothly that they risked the chance of running under the three hour mark and eventually the 70th annual ceremony ended right on time.

One of the best choices the producers made was to have the nominees read out before the presenters came out to announce the winner. The decision kept the show running smoothly and still allowed the presenters to have their moment.

The best highlight of the ceremony itself was the show’s opening number calling attention to the entertainment’s industry tendency to prematurely celebrate the way it handles issues from a lack of diversity to sexual assault.

The other moments of the night were hit and miss. The “Reparations Emmy” sketch was a surprise highlight of the Emmy celebrating unrecognized Black actors including Marla Gibbs, Tichina Arnold, John Witherspoon, and Jaleel White. The one recurring gag throughout the night involved Maya Rudolph & Fred Armisen popping up as Emmy “experts” in segments that never quite worked.

For weeks leading up to television’s biggest night there were growing frustrations with NBC’s decision to have Colin Jost & Michael Che host. Some find their jokes on Weekend Update to be in poor taste and both have them have made controversial opinions in various interviews. In the end their hosting duties weren’t even headline worthy – in fact they were kind of nonentities and the opening number proved that the show would have been better off in the hands of Kate McKinnon and Kenan Thompson.

The biggest surprises of the night came in the drama series portion of the night. Not shocking but not necessarily the front runner either, Game of Thrones won the program award. Leading up to that moment a number of shows could have walked away with the top award. Both The Crown and The Americans each won two awards while Thandie Newton pulled off an upset for Westworld in a heavily polarizing season. The first hint that Game of Thrones was going to win its third semi-consecutive program award came when Peter Dinklage won his third Emmy for a season where he was far from the most prominent actor in the ensemble.

Last week The Crown pulled off an upset in the casting category hinting that we might all have been underestimating the ensemble of The Crown. That ended up being true after Claire Foy won an Emmy after two seasons of portraying Queen Elizabeth II. On top of that Stephen Daldry won the first directing award of his career after countless Oscar, Golden Globe, DGA, and BAFTA nominations. It’s difficult to pinpoint why The Crown had such a good year. It’s possible that it took a while for voters to warm up to a such a well-executed show that at first glance looks like a traditional costume drama or it could be voters felt a sense of urgency to reward the show before the third installment with a brand new ensemble. Or maybe voters were swayed by Mariah Carey who recently declared The Crown the best show on TV.

As predicted The Americans followed a final season path blazed by Friday Night Lights and was recognized for writing and Matthew Rhys. This was the perfect send off for a show that critics have championed since the first season. Matthew Rhys benefited from being over-due in a category where two co-leads ended up splitting the vote. Either way the love for its final season was much deserved.

Rather than shocking wins by an underdog the biggest surprise of the night was what shows went home empty handed. After sweeping the drama categories last year The Handmaid’s Tale failed to win a single Emmy. Over the course of the night the groundbreaking streaming show kept losing awards they had won the year prior however the most surprising loss came in the supporting actress race where the three nominees likely split the vote making room for Thandie Newton to win after losing as the front runner the year prior.

The biggest takeaway from this year’s drama categories was just how much the Television Academy loves Game of Thrones no matter the season. This is good news for the upcoming final season which might be on its way to a massive sweep of the entire drama lineup.

The night began as a three way race for all of the top awards between Atlanta, Barry, and The Marvelous Mrs. Maisel. As the night progressed it became clear that this was the year of Amy Sherman-Palladino. Celebrating a 20+ year career, she won four awards for music supervision, writing, directing, and comedy series. On top of that Rachel Brosnahan and Alex Borstein won their respected acting categories.

The actors branch fully embraced Barry by awarding both Henry Winkler and Bill Hader their first Emmys. Voters were bound to respond enthusiastically to Winkler as full of himself acting coach and Hader as an aspiring actor with a major secret. This highlights a bigger point regarding this year’s comedy races – all seven categories went to a show centered on the entertainment business. Is this a sign that even with more shows than ever before that the Emmys are becoming too insular?

The biggest surprise of the night was the fact that Atlanta went home empty handed. Entering the night as the front runner in a number of categories the creative team lost award after award throwing away the chance for Teddy Perkins to grace the stage. The fact that such an innovative creative work failed to win a single Emmy came across as incredibly tone deaf. The fact that Donald Glover, Hirao Murai, and the entire ensemble were able to create eleven distinct episodes needed to be recognized in some capacity especially for “Teddy Perkins” an episode that will go down as the year’s best. 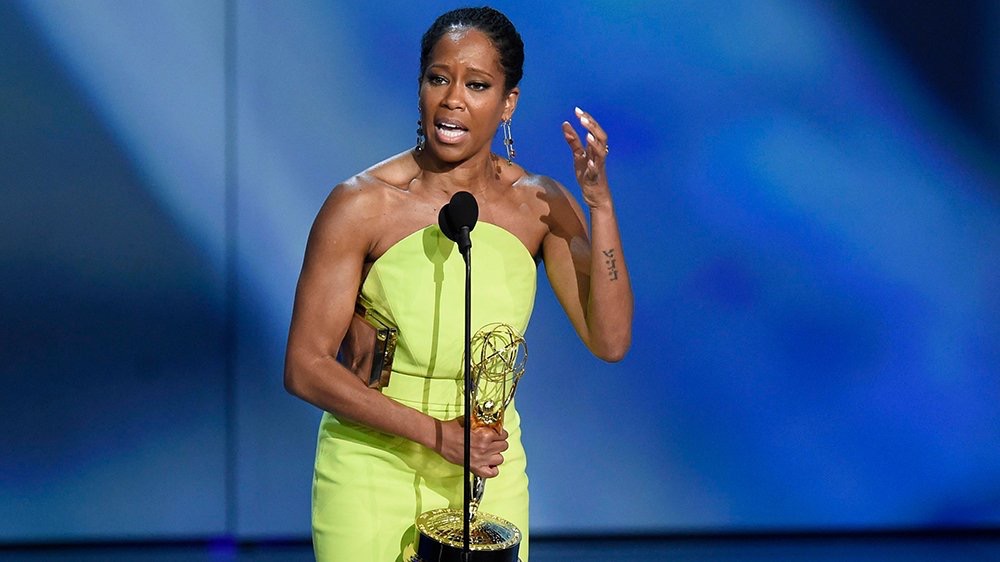 Ever since the Television Academy scrapped the blue ribbon panel in favor of an all-encompassing popular vote, the actors branch has generally picked a favorite program and voted for it across all the way down the ballot whether it be Olive Kitteridge, The People v. OJ Simpson, or Big Little Lies. This year the voters spread the wealth a little more but they still had their favorites.

Godless won both supporting actor races for Merritt Wever and Jeff Bridges. The writers branch celebrated Black Mirror for the second year in a row. As expected The Assassination of Gianni Versace was the big winner of the night taking home three Emmys for program, actor, and directing on top of the four awards it won last weekend.

Readers, what did you think of the 70th Annual Primetime Emmy Awards? Was there a particular win that excited you? Do you favorite moment from the telecast? Sound off in the comments below!

Review: Quincy - Essential Viewing Into The Making Of A Musical Genius