Review: Quincy – Essential Viewing Into The Making Of A Musical Genius

With over 79 Grammy nominations, 27 wins, an EGOT under his belt, and a career that has spanned over 50 years, one has to wonder how anyone can cover Quincy Jones and his epic achievements in a two-hour documentary. Daughter and actress Rashida Jones takes the helm in the director’s chair with filmmaker Alan Hicks to pull off the incredible task with flying colors to embark on this deep and thoughtful examination of Quincy Jones and his life.

Through the use of voice overs, Rashida Jones and Hicks do away with the talking heads format, instead, as they say, sifting through over 2000 hours of archival footage to track her father’s roots.

Born in 1933 on the South Side of Chicago, Quincy Delight Jones was introduced to music at a young age. He recalls during a podcast with Dr. Dre that he, “wanted to be a gangster” showing the scar on his hand from where gangs had stabbed him with a switchblade. He shows another scar on the side of his head from an ice pick incident. But his love for music and discovering a neighbor’s upright piano would take over his life and the rest, as they say, is history.

Jones overcame confrontations with racism when on the road with Lionel Hampton. A band tour to Europe would also change his life, influencing young Jones and luring him back not long after.

Dizzy Gillespie, Ray Charles, Count Basie, and Frank Sinatra are just some of the artists that Quincy Jones would work with, composing and arranging music with the jazz greats, but it was while working on the musical arrangements during The Wiz that Jones would first meet the young Michael Jackson. Jones instantly saw his talent and determination and agreed to produce Off The Wall. It was their collaboration on Jackson’s next album that would break records everywhere. Thriller would cement their partnership and make its mark in musical history. Even if you have never heard Thriller, Off The Wall or any of the aforementioned artists, Jones has worked on over 400 other albums, so odds are you have heard his work. This documentary will make you want to go out and hear some of his jazz tunes, and revisit his scores and music.

Fans of his work and music lovers alike will revel in Quincy for all the music featured in the documentary, as well as the rare and forgotten footage — whether it’s the phone call to Colin Powell, Michael Jackson talking about the Thriller video, when Jones says it’s going to be the “Citizen Kane” of music videos. He’s right, Thriller remains the greatest music video ever made.

The rare home footage gives us an intimate insight into his life. The stories of his personal life are heartbreaking. His mother was taken away in a straitjacket while he looked on as a young child. He revisits his childhood home in his adult years and sees the bed where that incident happened.

There’s intimate hospital footage of Jones in a hospital bed after collapsing from a brain aneurysm. He has to go back to the hospital a few months later for a second operation. To say Jones is a survivor is an understatement. 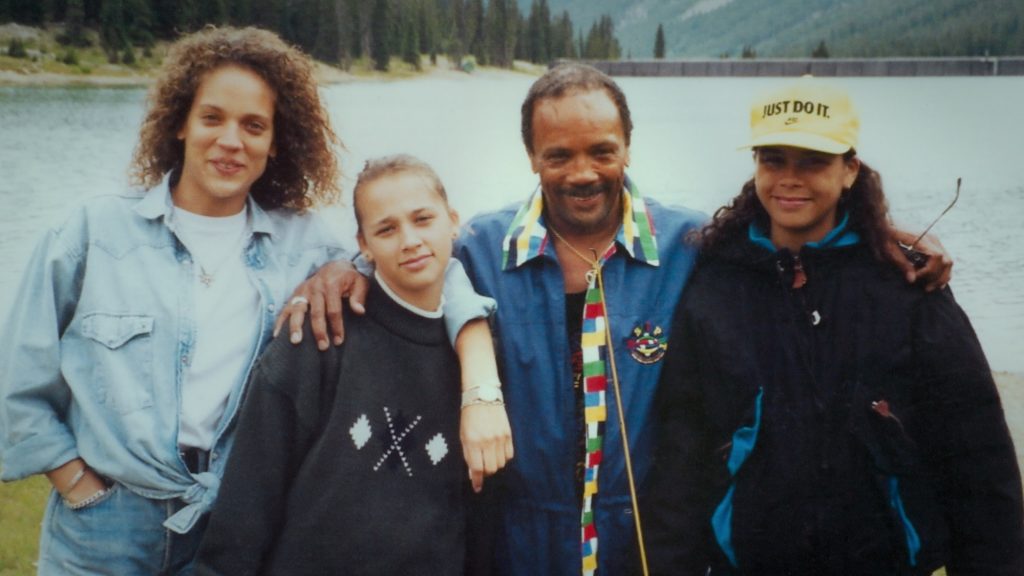 The most powerful moment perhaps comes when Jones — who has been working on producing the Smithsonian National Museum of African American History and Culture’s opening — gets a behind the scenes tour. He stops in front of a display with outfits from Michael Jackson, Ray Charles, Aretha Franklin and Prince. He has survived them all. “All of them gone.” He says. It makes for a truly poignant moment.

Despite his health issues, he powers on. As he makes notes on score sheets, sitting next to artists he’s mentoring, we see his talent come alive; it will give you goosebumps.

Jones and Hicks assemble a who’s who of music greats and icons to piece together the quintessential insight into Quincy Jones, his life, and his legacy.

At the LA premiere of Quincy, Jones and Hicks said, in addition to the archives, they had collected over 800 hours of footage and followed Jones for three years. They have done a masterful job of editing it down.  There’s no room here for anything other than a great tribute to honor the man.

The soundtrack is superb, hit after hit. It’s a fine education into the making of a legend, a precise and intimate look at a man whose music has influenced our lives and culture. He is Quincy.

Quincy certainly leaps into consideration for the most outstanding documentaries this year, ranking alongside, Active Measures, Dark Money, RBG, Three Identical Strangers, Won’t You Be My Neighbor, Science Fair, Whitney as one of the best of 2018.