Anyone who remembers the year Spike Lee’s Do the Right Thing was shut out of the major awards at the Oscars knows what a big deal it was. There were protests. Kim Basinger came out on stage in a dress designed by Prince (RIP) and condemned the Academy for ignoring this milestone film.

“There is one film missing from this list. It’s ironic because it might tell the biggest truth of all. And that’s Do the Right Thing.”

The winning film that year, (in)famously, was Driving Miss Daisy. You know, one of our favorite stats to pull out. The Driving Miss Daisy stat says that a film can win Best Picture at the Globes and the Oscars without its director even being nominated. Bruce Beresford wasn’t even nominated for a DGA award. But there was so much momentum for Driving Miss Daisy. Remember, back then how many ticketbuyers saw the movie counted for a lot. How much the movie impacted the moviegoer culture mattered a lot. Those things no longer factor into the Oscar race. Partly because the movies that the most people like and pay to see are big budget tentpole franchise movies designed to make a lot of money overseas. And partly because the Oscars now are so insulated from the culture at large.

But Spike Lee’s audacious Do the Right Thing came at a time when the culture clearly wasn’t ready for it. It was like a brick of fire shattering a plate glass window. Who else but Spike could have or would have opened a movie like this:

Do the Right Thing is beautifully made, truthfully told, and most importantly bears the thumbprint of Spike himself. It’s a thumbprint that irritates many, but there is no denying he is an artist with a distinct vision. Just watch that opening. Spike Lee was talking about the same stuff people talk about now, only back then he didn’t have a hive mind backing him up. No, Spike Lee, back then, was mostly categorized as an “angry black man” and the Academy shunned him.

So much has changed in 30 years. This year, there are four — count ’em — four films directed by and starring black artists in the Oscar race. Those are Spike Lee for BlackKklansman, Ryan Coogler for Black Panther, Steve McQueen for Widows, and Barry Jenkins for If Beale Street Could Talk.

I’ve been doing this a very long time, as you all know. And when you look back, as we sometimes do, it’s astonishing to see a near uniform parade of white actors nominated for and winning awards. And that goes for directors too. So it’s quite something to watch this many directors of color drawing awards notice for their work.

Fact: No black director has ever won Best Director.

It’s never happened. The two films — and only two — by black directors that have won Best Picture, 12 Years as Slave and Moonlight, did not win Best Director. Both directors are again up for Best Director and Best Picture this year: Steve McQueen with Widows and Barry Jenkins with If Beale Street Could Talk. Both films star women of color. And, as I’ve mentioned before, the directors who won in those respective years, Alfonso Cuaron and Damien Chazelle, are up once again for Best Director having directed two of the best films of the year — and as far as I can tell, right now, they are the top two: Roma and First Man.

What we should all be thinking about is this: how many black directors will be nominated? Will more than one make it, and thus, make history? It’s hard to say. Best Director seems crowded:

Roma
First Man
A Star is Born
Green Book
BlackKklansman
The Favourite
Can You Ever Forgive Me?
If Beale Street Could Talk
Widows
Black Panther

And that’s before you even get to Vice or Mary Queen of Scots, and that’s setting aside films like Leave No Trace or Eighth Grade. The Front Runner, First Reformed. It’s stacked, no matter how you look at it.

Do the Right Thing was unique for the time in that Hollywood had, for years, spoke for the black perspective. We depended on and relied on white directors to tell those stories because there were precious few black directors who could break into the studio system. Directors like Steven Spielberg (The Color Purple) or Ed Zwick (Glory) or Bruce Beresford (Driving Miss Daisy) meant well. They wanted to tell those stories because they knew they needed to be told. But Spike Lee told it as a black auteur, a writer and director coming out of NYU. What a triple threat he was: acting, writing, directing. But what he also did back then was rub white Hollywood the wrong way. He spoke his mind, and did it bluntly. That wasn’t something that high profile filmmakers was invited to do, much less a black director. He was seen as a threat. His films became more angry as Hollywood shut him and his ideas out.

Considering his entire career, from She’s Gotta Have It to Do the Right Thing to Malcolm X to 25th Hour, it’s hard to imagine this is the Oscar voters’ response to Lee’s work: 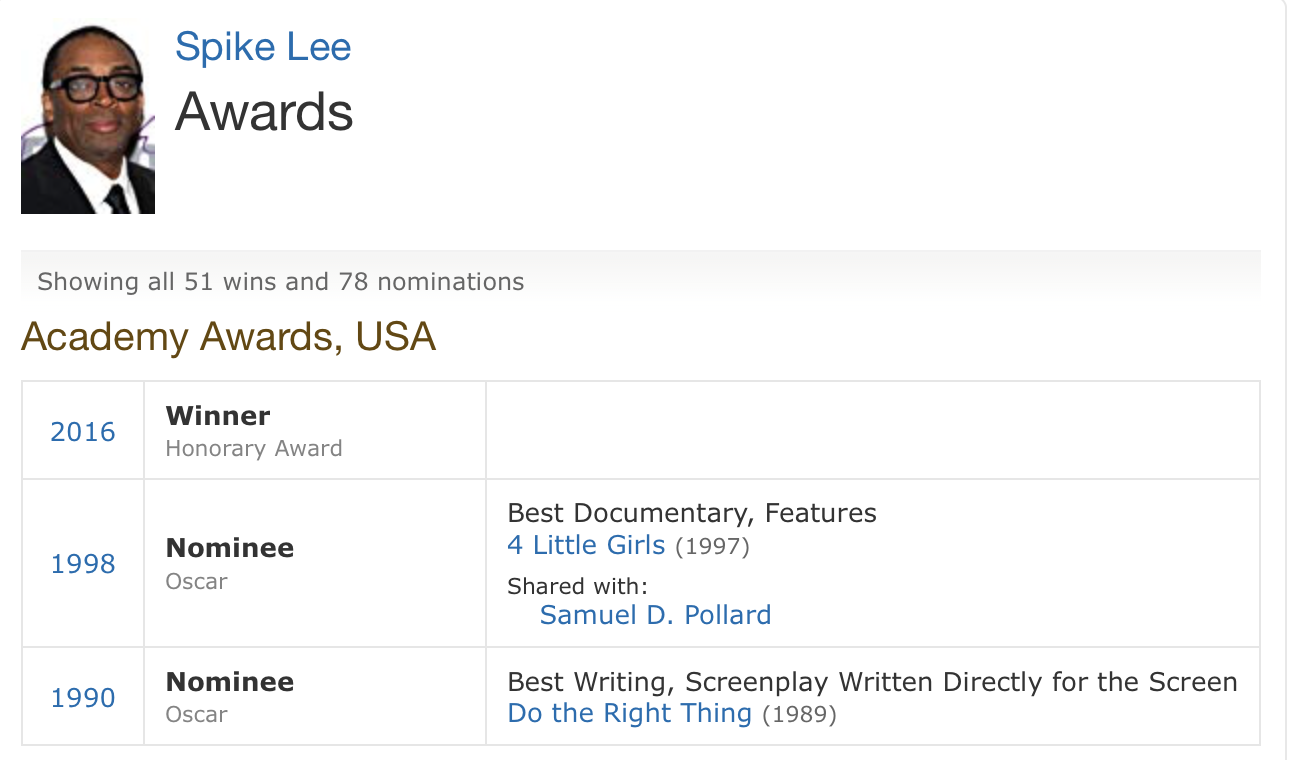 To make up for this, Lee was given an honorary Oscar in 2016, and that move, some think, will make it harder for him to get nominated this year. I’ll tell you what, though: the last few minutes of BlackKklansman, despite its breezy and funny narrative (I could have done without the one racist white woman I thought was a wee bit over the top, but that’s a minor complaint) is the single most powerful few minutes of film of the year, without a doubt. No one, not Michael Moore, not any other filmmaker has come close to really exposing the Trump presidency for what it is, what it’s done to this country, what is at stake for all of us. It’s Spike Lee at his absolute best and for those few minutes alone he deserves a Best Director nomination, but he deserves it for so many other reasons.

Lee is a director whose entirely internal artistic universe has been bled into a long career of brilliantly diverse films — documentaries, music videos, dramas, political screeds. This is a man who has shown the industry all that he can do. With a career that has spanned three decades, the impact of Spike Lee on American film is peerless.

Now I know I’m not the best advocate. No one wants to hear a white woman championing a black filmmaker. Not in 2018, that’s for sure. There are plenty of writers of color who can do a better job writing about the many gifts of Spike Lee and his cultural impact. But you know what? I write about the Oscars and the relationship between Spike Lee and the Academy is a long one.

No one knows how this year will play out, but I got all my chips on Spike’s number, for a nomination at least. At LEAST.

Richard Marx, Composing Remotely with a Live Orchestra, and Other Behind the Scenes Cutaways from ‘Family Guy’ Season 19

Samuel L. Jackson, Liv Ullmann and Elaine May to be Honored with Governors Awards

Nicole Byer On Who She Would Bake With For ‘Nailed It!: Double Trouble’

Alan Yang on Creating ‘Master of None’ Season Three with Ansari, Waithe

MASTER OF NONE S3 (L to R) LENA WAITHE as DENISE and NAOMI ACKIE as ALICIA in episode 301 of MASTER OF NONE. Cr. COURTESY OF NETFLIX © 2021

Composer Christophe Beck Returns to His TV Roots for ‘WandaVision’

Katheryn Winnick on the Thrilling Adventure of ABC’s ‘Big Sky’