‘Fortune Rookie’ Creator Janet Varney on Her New IFC Series, Asserting Her Power as a Woman in Comedy

"It’s hard not to feel like you’re being difficult when you have ideas."

by Megan McLachlan
in ADTV, Interviews
0

Janet Varney, Creator of IFC’s Fortune Rookie, talks to Awards Daily about psychics, playing characters who behave badly, and women with big ideas: “We’re having to overcome our own sense of permission.”

The idea for Janet Varney’s new IFC series, Fortune Rookie, stems from her one and only experience going to a psychic.

“I’m a real Fox Mulder here,” says the bubbly Varney with a laugh. “I want to believe. I don’t feel like I’m ever given any reason to actually believe.”

Varney recalls her experience as a cliched one, saying that the psychic didn’t hit on anything significant.

“The only thing that happened that resonated with me was he did intuit something that was a decision I was struggling to make. Being able to read people and let them guide you to what they want to hear is this amazing gift on its own—not a psychic power, but a gift. I couldn’t stop thinking about it and became obsessed with this idea of how the role of psychics exist for people and why a place like Los Angeles is prime territory for this kind of stuff.”

Varney describes Fortune Rookie “Janet” and the other characters on the show as hyper-stylized products of Los Angeles: self-absorbed, whether they realize it or not. But even though these characters are egocentric, Varney might enjoy playing them more than unselfish characters.

“One of the things I’ve learned in playing a character like Becca from You’re the Worst is that there really is such a joy and freedom in behaving badly and in being a character that you do roll your eyes at. She’s just so delicious to loathe. There’s something about that that appeals to me. There’s an inherent narcissism to all of the characters [on Fortune Rookie] that works and pokes fun at the idea of Los Angeles, in a fresh way.”

Although she pokes fun at the City of Angels, she’s also immensely grateful for its comedy opportunities and talented people.

“There is an overarching comedy community and then there are little comedy community pockets, almost like the way LA is structured. You have this grand scope of what Los Angeles is, but within that, there are all of these multi-functioning cities and neighborhoods. Just feeling that electricity, from these performers and writers we know, and thinking what would be fun for them to do, it never ends. [Fortune Rookie] is the easiest thing I’ve ever written.”

The hardest thing for Varney was having too many ideas and actors and not enough time.

“It was agonizing. There are so many storylines that Brandon Reynolds [co-writer] and I had. We had eight seasons worth of stuff. When we started getting ready for the show, all I wanted to do was call 150 people and go, ‘Hey, this thing I made, please know that you’re part of it, but we could only do an X amount.’ When your biggest worry is ‘I hope everyone who isn’t in it inherently knows that I wish they were and I can’t wait to work with them on this,’ then you’re in pretty good shape.“ 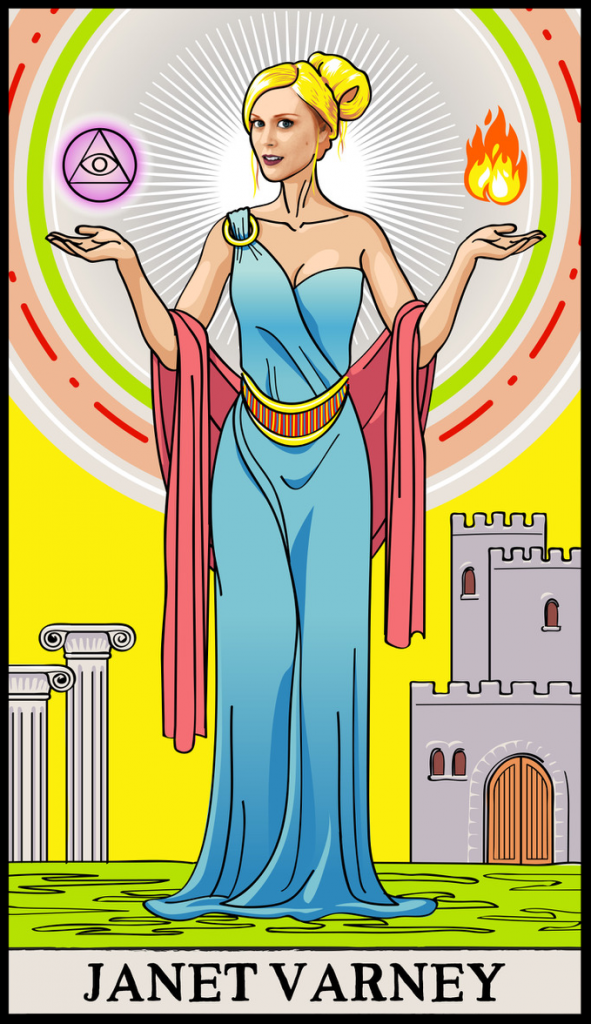 As creator of the series, Varney put herself in a position of power, something that she feels she, and other women, are still figuring out how to manage without questioning themselves.

“I was confronted with my cultural femininity in that it’s hard not to feel like you’re being difficult when you have ideas. When am I being difficult and when am I being assertive? What I found out during this process was my sense of what is becoming difficult or aggressive is so far from what is actually being perceived, that it was such a great learning experience for me. It’s a really interesting dynamic because there’s a timidity that women continue to feel even as they’re getting more and more assertive about what they want, not just in the way they’re treated in the workplace, but in their work itself and what the voice of their work is. We’re having to overcome our own sense of permission. In general, the threshold for a woman becoming worried at how she’s coming off in terms of asserting her power, that threshold is continually lower than it is for men. I’m excited that those things are changing, even as we speak.”

The Joys of Comedy and Improvising

Even though the art of improvising is the ability to go off-script, Varney believes that on TV series it’s important to have a great script that you can build off of in order to deliver top-notch impromptu delivery. Fortune Rookie started with scripts, but then incorporated improvisation from what was on the page.

“The biggest tip you can give an improviser, from my perspective, is ‘Here’s great stuff [a script], now you can stretch your legs and really play.’ That’s absolutely what happened on Fortune Rookie.”

When it comes to improvisation and sketch comedy, Varney certainly knows what she’s doing, as co-founder of SF Sketch Fest, which is celebrates its 18th fest in 2019.

“I watch a lot of drama because I do associate comedy with work. But when I watch drama and think about what it takes to tap into those dark places, I’m glad I get to go to work and laugh for a living, now more than ever.”

Unlike her more selfish characters on screen, Varney has a very generous attitude when it comes to promoting her new comedy series.

“The only thing I feel passionately about is just making sure people get to see it, because I completely get that there are a million choices out there. We’re hoping there are things that will stand out about this show that will help it stand out. There’s so much to get excited by in entertainment.”

Megan McLachlan is a freelance writer that lives in Pittsburgh, PA. Her work has appeared in Buzzfeed, Cosmopolitan, The Cut, Paste, the Pittsburgh Post-Gazette, Thrillist, and The Washington Post. Follow her on Twitter at @heydudemeg.

by Frank J. Avella
0
No Result
View All Result