Predictions Friday with the Oscar Squad – Is it A Star is Born’s to Lose?

A lot has to happen between now and when final Oscar ballots go out. There is not enough caution out there and way too much confidence in some predictions. Maybe A Star is Born is the frontrunner to win Best Picture, maybe it’s not — but I feel pretty sure that it’s too soon to know anything for sure. I think it’s my duty to remind everyone how the Best Picture race works – and then we’ll get into the Oscar Squad’s first official predictions for 2018 (with the caveat that not everything has even been seen. Vice hasn’t been seen, many of these folks making predictions haven’t seen everything – all of these things will have to be taken under consideration). 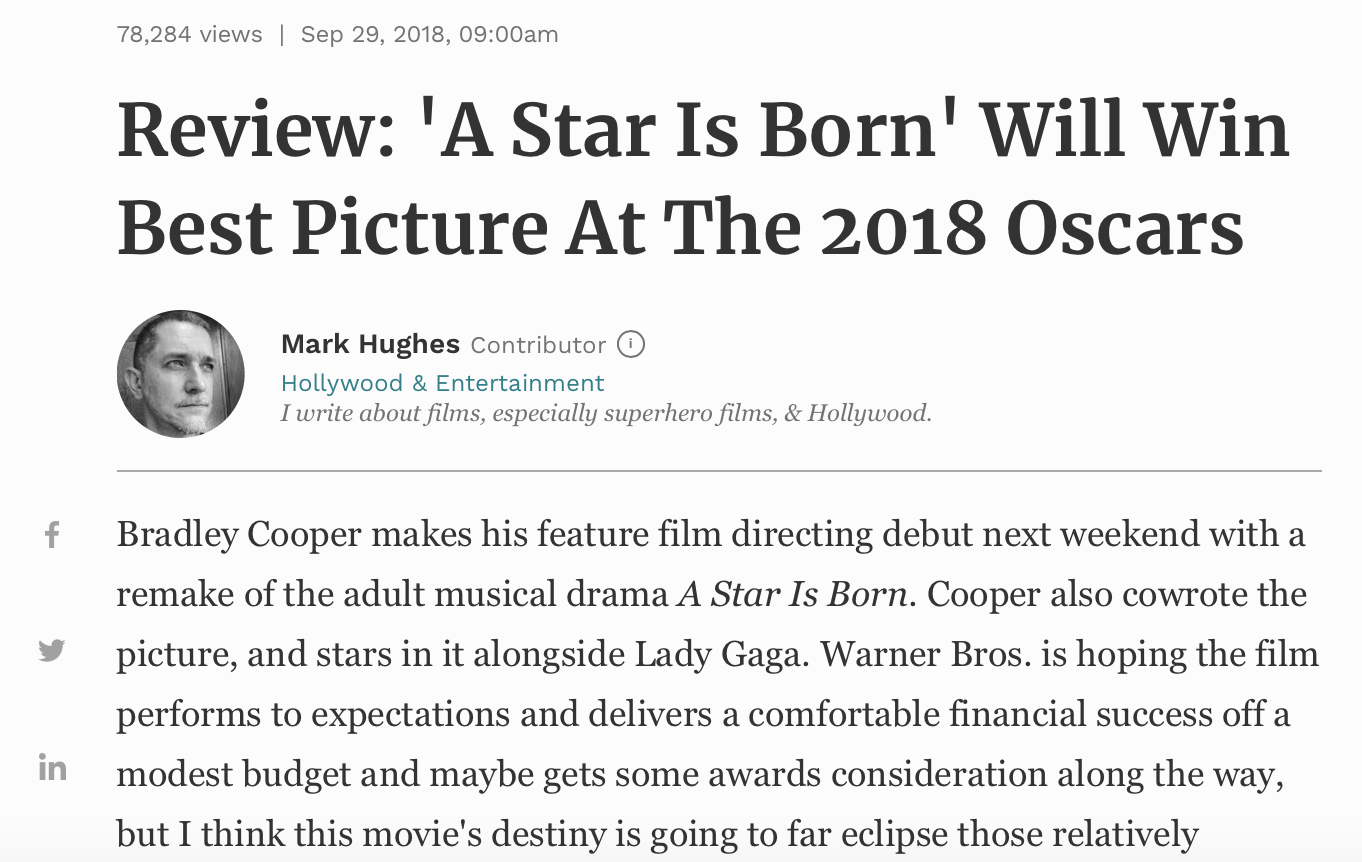 So here are a few things to take into consideration.

1) You don’t really know until the big guilds ring in. Can Bradley Cooper win the DGA? He’ll win the first-time director trophy for sure, but will he also win the DGA? Over Alfonso Cuaron and Damien Chazelle? Or are people thinking it will split, with one of them winning director (most will say Cuaron, I figure) and A Star is Born will win Best Picture?

You all know what I think and what I’ve said about that. In the case of splits, they are almost always impossible to predict. Some have predicted them accurately (a few of us called the Moonlight/La La Land split, and a few of us called the 12 Years a Slave/Gravity split, but how many called the Spotlight/Revenant split?). The thing to know is this: in the era of the preferential ballot, predicting Best Picture ain’t easy. Even last year’s Shape of Water non-split seemed like a pretty hard call — although it did win the PGA, DGA, it wasn’t even nominated for SAG.

So people will say, just go with your gut instinct and your gut is telling you A Star is Born will win Best Picture. There really isn’t anyone who can argue with that.

2) The film hasn’t even opened yet. With the possible exception of The Artist, predicting whether a movie will win before it opens is a major gamble. The first reason is that the prediction will bring people to the box office, perhaps, based on this buzz — but like poor La La Land, it will be put in a position of having to meet impossible expectations. So you saw a lot of people on Twitter saying “it’s the real deal” and the “buzz is all real,” and surely, that is possible too. But remember, the Oscar race isn’t static — it’s fluid. There is a conversation that will happen around the movie and that conversation will shape its perception heading into the race. The conversation hasn’t started yet.

3) The pundits are banking the actors driving this through, because Bradley Cooper is an actor and they love it when actors make good, like Ben Affleck. Maybe if Cooper is snubbed for a Best Director Oscar he might generate that kind of feel-good momentum — you can’t count that out — but no one really saw the surge of Argo coming until it started really winning stuff. Can actors make this film win? Absolutely. If they are as on board as the critics are, they can. But if it’s a done deal, as they’re saying it is, I would expect it to win SAG ensemble, Gaga to win Best Actress, and Cooper to win Director. Can they? Maybe. Will they? I don’t know. No one who knows what they’re doing covering the Oscar race will tell you they know for sure.

4) The preferential ballot is an odd animal. It just is. It’s hard to know how these movies will rank. Is the film a number one or nothing, like La La Land? Is it a number one and a number two and a number three like Shape of Water? These things must be considered and thus, all of us should be heading into every Oscar race with some doubt rather than rigid confidence.

It’s worth noting that over at Gold Derby Alfonso Cuaron’s Roma is in the top spot among many pundits. And honestly, that is something that COULD happen, but then you have to factor in the actors. Are the actors going to go for a movie without any big stars? Well, they went for Slumdog Millionaire. Is Alfonso Cuaron’s epic undeniable in its ambition, deliver,y and scope so that it becomes too big to ignore? Definitely possible. It’s never a bad thing to predict Best Picture by thinking about Best Director. However, the actors are the question here. Will they even watch it? Black and white and in Spanish? With subtitles? Is it so powerful that it can overcome this?

Will voters, when gathered around their family Christmas, say to those sitting around the crackling fire — hey let’s watch this black and white movie in Spanish? Maybe.

And then there’s the Netflix factor — a factor that no one wants to go near. Critics are being forced to embrace Netflix because they can’t deny Cuaron. How will the Academy snobs like Steven Spielberg take to it? A question to consider. Roma has to break two rules to win: no Netflix film has ever even been nominated for Best Picture, and no film not in the English language (except maybe The Last Emperor?) has won Best Picture.

Also worth nothing, First Man, to me, has the kind of massive epic scope a Best Picture needs (like Roma does) and is about a great American hero – but is it TOO artsy? Is it too cerebral? Can people connect with it emotionally (I did). Will people want to put it on their screeners over the holidays? Will it make money? Will get hit with a backlash?

Green Book also has the stuff that Best Pictures are made on, but since it hasn’t opened yet, like all of the above films, it’s hard to know how it will play once Twitter has a go at it. Will it get hit with a massive shitstorm or will it somehow scrape by, shitstorm-free? Green Book, like A Star is Born, is an actor’s movie. And both Viggo Mortensen and Mahershala Ali could be frontrunners.

And then there’s Vice. It’s a late breaker and traditionally late breakers have a tough time gaining the momentum needed to win. But in the era of heated politics, in the dark days of Trump, we must consider how we’re all going to be watching movies right now.

I have to say at this moment that I could not and would not declare any movie to win Best Picture for sure. I have done this way too long to stick my neck out like that. Also, I’ve learned that once you say those words you almost always doom the film by putting a big fat target on its back. Thus, just the declaration that a movie is headed to a win knocks it down a notch or two. That’s just the way it is. And now, the first Oscar Squad of the season (thank you Clarence!)