Glenn Close got her first acting nomination the year I graduated from high school, for The World According to Garp. She made enough of a name for herself as the wacky feminist icon Jenny Garp that it launched her career.

It was her first Oscar nomination, but no one really thought she would win. Of course, that year Jessica Lange made Frances and Tootsie. She couldn’t win Best Actress for Frances because she was up against Meryl Streep for Sophie’s Choice and nobody was going to beat her. Lange had to win supporting actress for Tootsie because she couldn’t win for Frances. It remains among the greatest ever performances. Actresses were titans back then. It was the last era of that because things would change in the next decade as actresses became younger and less powerful in Hollywood.

It’s not easy winning an Oscar. This is true in any category. For women (and especially women of color) just getting work is a battle. Getting work worthy of an Oscar is even harder. Winning an Oscar after a certain age is nearly impossible. Whereas men win for difficult, complicated roles, women often win because they are the ones everyone falls in love with for a few months out of the year. The only way Glenn Close is winning an Oscar this year is if people take into consideration her entire career and make up for all of the times she didn’t win. Of course, they don’t really look at it like that. They never gave Peter O’Toole an Oscar. Nor Lauren Bacall. You either get that one lucky late career break, like Julianne Moore with Still Alice and, better yet, Helen Mirren with The Queen, or you lose out to the one everyone falls in love with. And this year that person seems to be Lady Gaga. There is no other actress right now who can match her popularity, her buzz, and the wow factor.

For Gaga, it’s obviously more than her being a hot young thing. Her singing, her songwriting, his status as icon and her unmasking all factor in. She took a risk and it paid off. She is connecting to so many out there in a way few performers can.

Glenn Close, in contrast, plays The Wife, but it’s a slow burn, a meditation, a Bergman-esque deep dive into a character who has been living a lie for a lifetime. It likely isn’t headed for a Best Picture nomination, which would help Close. To win this, she’d have to be out there campaigning every day, at every event, performing the dog and pony show most actors aren’t up for. It is a shame that it is like that, but that is how it is. In Close’s case, the echoes from her past performances matter more than this one. In fact, Close’s best performance as Sunny Von Bulow in Reversal of Fortune wasn’t even nominated. An Oscar win for her would be a career Oscar, and how voters feel about that depends on how they feel about the other contenders in the race.

To make matters a little more surreal, Glenn Close lost for her brilliant, memorable performance in Fatal Attraction to another singer-turned-actress known for her extravagant outfits and campy performances — yes, that’s right, she lost to Cher for Moonstruck. Though by then, Cher already had quite a few performances under her belt. It wasn’t her debut. She’d done Silkwood and the Witches of Eastwick. She transformed herself for Moonstruck like Gaga has done for A Star is Born. But really, as with Cher, this is more about falling in love.

Here are all the times Glenn Close didn’t win the Oscar, besides for The World According to Garp.

For her (what was really a leading role) work in The Big Chill, she lost to Linda Hunt. No one can complain about that one. Hunt gave one of the all time greatest ever supporting performances in The Year of Living Dangerously. 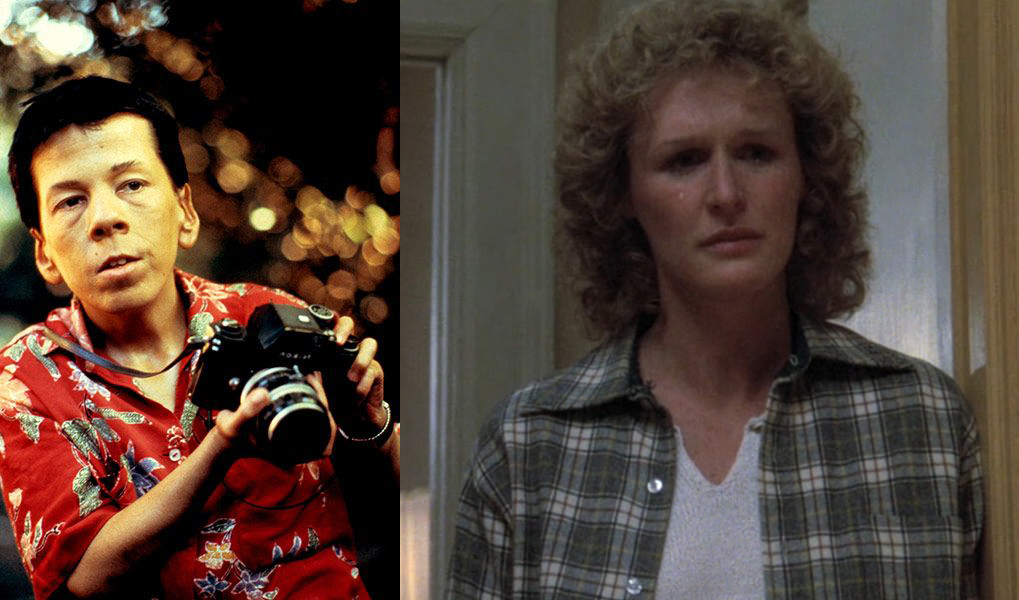 For The Natural, she lost supporting actress to Peggy Ashcroft for A Passage to India.

And for course, there’s her (in)famous performance in Fatal Attraction. They were never going to give her an Oscar for ruining Michael Douglas’ life and making a bunny stew.

And then, for Dangerous Liaisons she went up against Jodie Foster for The Accused in Best Actress. Again, an impossible win against a great performance.

And there was no way she was going to beat Meryl Streep in the Iron Lady if Viola Davis couldn’t.

Finally, here she is as The Wife. The anchor, the rock, the woman behind the man and the writer behind the writer. It’s a dazzling, brilliant, moving, accomplished performance. And here we are yet again. Timing. It’s all about timing and luck.