First Man and the Trump Effect – Is Our Partisan Politics Impacting Oscar Ratings and Box Office?

It came as a shock to the Academy that their ratings for the 2018 broadcast were the lowest of the low, with only 26 million viewers tuning in to watch. Since they’ve been measuring viewership (going back to 1974) they’ve never dipped down that low. Mostly they hover somewhere between 30 and 40, with 50 being a high point. But to dip as low as 26 million as part of a four year pattern of decline has clearly made ABC nervous — nervous enough that the Academy took steps toward making dramatic changes this year to try to up the ratings.

There are at least three possible explanations for the ratings decline. The first, which many assume to be true, is that people just don’t sit down and watch long awards shows anymore. Almost all entertainment awards ceremonies are down. The Grammys, they say, are down, as are the People’s Choice Awards, etc. A second explanation is that the nominated films aren’t popular or widely seen by enough people. In tangible numbers, for example, Moonlight sold 3 million tickets in North American and even La La Land only sold 17 million. The cold hard truth is that people have a multitude of entertainment options these days, unlike the 70s or 80s. The Academy’s Board of Governors — in consultation with ABC, no doubt — must reasonably wonder if ratings would rise if viewers felt more invested in outstanding films like Black Panther (which incidentally sold 76 million tickets). It’s of course not likely that A Star is Born will earn $700 million but if it does $250 million will that movie’s fervent fans be more inclined to watch the Oscars 4 months from now? Do the 32 million tickets sold for Gravity in 2013 correlate to that year’s Oscars broadcast reaching a 10-year ratings peak of 42 million? We will very likely get to test that theory in February.

But there is another possibility I want to bring to your attention. The other day, a friend of mine on Facebook who is a Trump supporter and Republican (though mostly moderate in politics) said he liked my First Man review enough that he would break the “code” and go see it. What he meant was that, as a Trump supporter, or a Republican, none of them felt like they should see a movie that had been slammed by Trump and Ted Cruz and others. They felt like they were betraying party loyalty.

When the non-controversy about the absence of a flag-planting ritual on the moon first bubbled up my first thought was, will this impact the Oscar voters? And of course, the answer to that is no. I didn’t even think it would impact box office, but now I believe it has. First Man opened just $4 million shy of its $20 million target. Again, in terms of butts in seats, that’s 400,000 butts. Do as many as 400k people in America pay any attention to what Cruz or Trump tell them to do? We already know the sad answer to that. I think we can safely say that if Cruz and Trump had not all but called for a boycott of the film, it would have hit its target opening weekend. If it had bad buzz or bad worth of mouth that impact would have hit after opening weekend.

We can’t possibly know if Trump and his army of zombies had anything to do with this, but it’s worth taking into consideration, particularly when it comes to Oscar ratings.

Does it look like the 2016 election marked a turning point in Oscar ratings? Here is how the factors have lined up over the years: 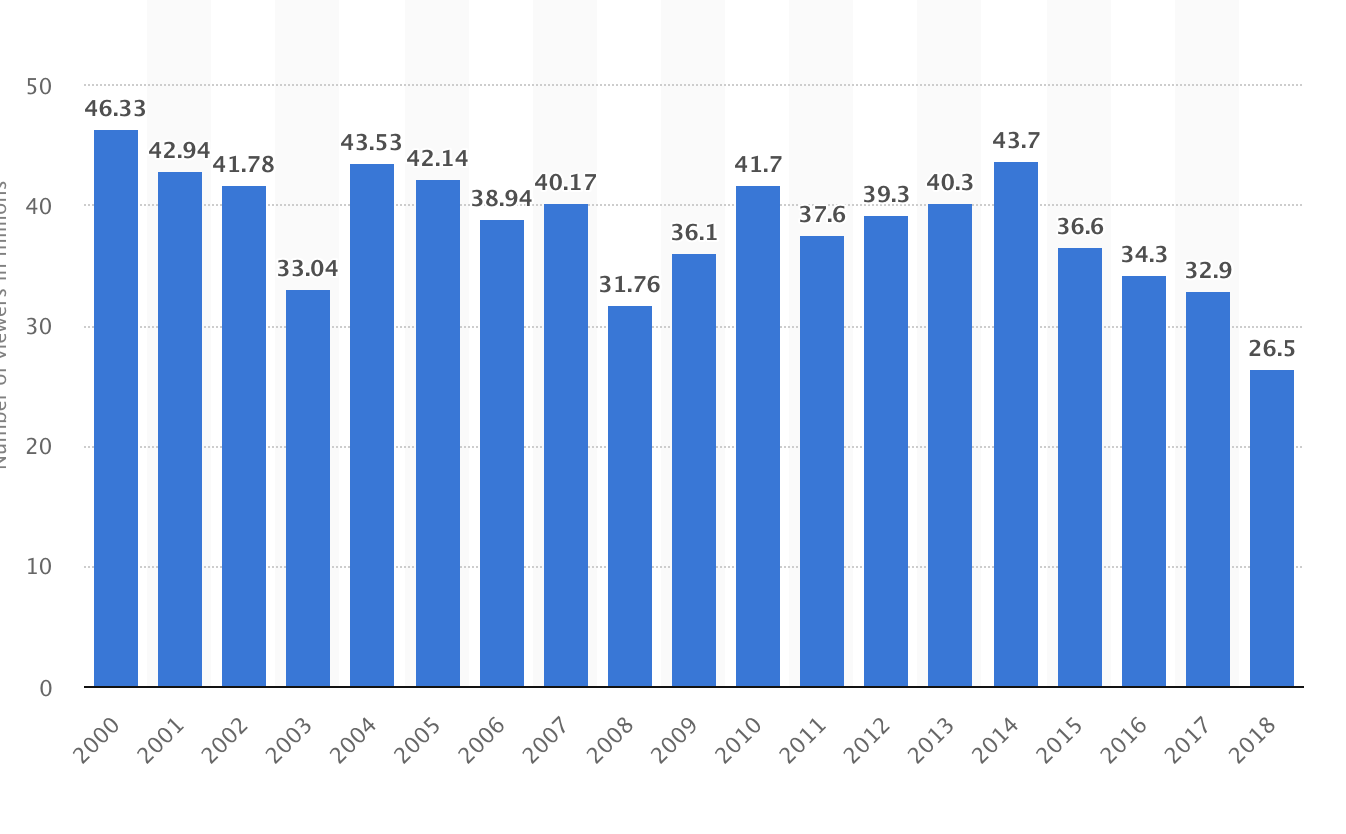 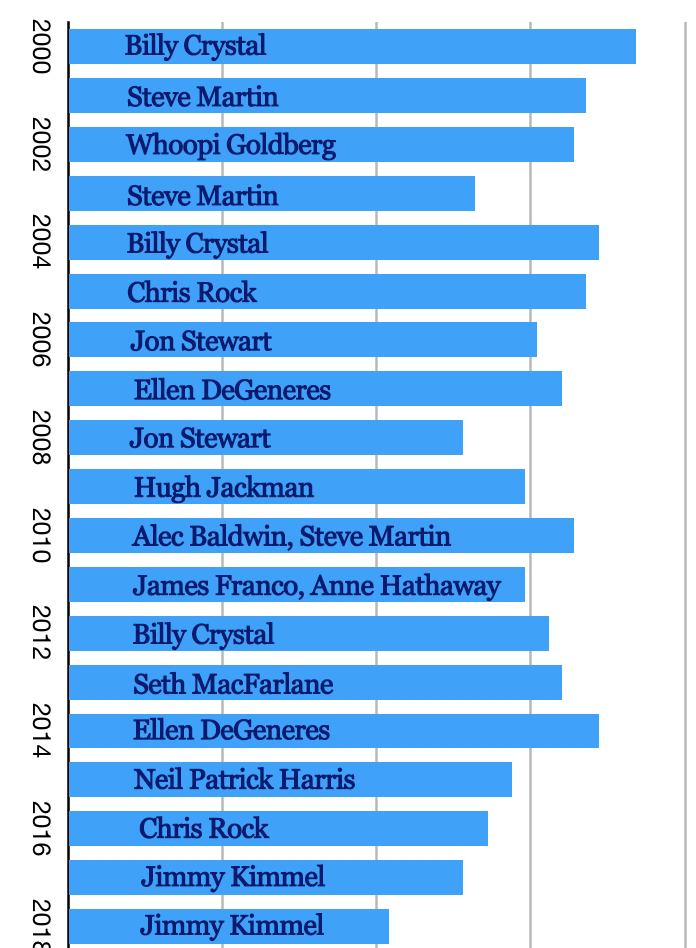 When I look at this I think — sure, Billy Crystal and Ellen DeGeneres were popular hosts. So was Chris Rock once upon a time. But I also look at the last three years — 2016, 2017 and 2018 and I’m realizing that we are entering one of the most polarized moments in recent American history. An era in American culture when Hollywood itself has been demonized by the relentlessly blaring right-wing megaphone.

Trump, and the election in 2016 overall, split our country sharply in half. Trump made everything about “you are either with me or against me.” He turned watching the Oscars into a political act. To be fair, so have we. If we feel we are at war, as many of us do, and we’ve all taken sides, Hollywood has taken a turn to the left. It always has been to a large extent, but there was a struggle (or at least an effort) once upon a time not to alienate the right, or middle America. There is no question that the Oscars, and Hollywood overall represent a proudly vocal part of the resistance against Trump (with Kanye and maybe James Woods notable exceptions, if we want to pretend that James Woods still has any Hollywood presence whatsoever, beside his mailing address.)

Is it possible — just possible — that the reason people didn’t watch the Oscars last year is that Jimmy Kimmel is overtly a voice of the political left, and that Trump all but ordered his zombie army not to watch? Could that not account for an unknowable number of viewers to drop the Oscars the past two or three years? I think it seems possible that it could have had some impact, even though none of us wants to admit it, just as I think the Trump folks, and the press around First Man, has impacted its box office. Anyone who doubts that Americans can be this gullible and slavishly petty need only watch a few videos of nincompoops burning the Nikes last month.

Trump tweeted after the Oscars, “Lowest rated Oscars in HISTORY. Problem is, we don’t have Stars anymore – except your President (just kidding, of course)!”

To which Kimmel responded, “Thanks, lowest rated President in HISTORY.”

Trump might be kidding (Narrator: He wasn’t.) But his glee was palpable. No devote Trump supporter would have been caught dead watching them, no listener of Ann Coulter, nor any follower of Tomi Lahren. It would be considered unpatriotic among the MAGA battalions. That is how psychotic they are. Kimmel’s response, of course, emphasized exactly which side he is on and thus, the side the Oscars are on, as well.

If this theory is even partially true, and we are indeed so cripplingly divided that a president can command his fans which movies to boycott, what will that mean going forward? Does that mean that the Oscars themselves will have become a partisan issue for millions of ordinary Americans? Does that mean ratings will continue to dip for the unforeseeable future? If that’s so, how can the Academy and the broadcast’s producers ever hope to lure back viewers who have been essentially brainwashed into thinking the Oscars are anti-American?

Also, as if American cinema isn’t embattled enough, why in god’s name do we on the left keep attacking our own movies for not being woke enough? 2018 has been Hollywood’s and the Oscar race’s most inclusive year on record, yet there are still critics taking First Man to task for being all about the NASA Apollo missions, in a bygone era when, yes, sorry to say, NASA was staffed virtually exclusively by white men. And it doesn’t stop there. We know it isn’t going to stop there. Every filmmaker’s past will now be scrutinized and maybe exposed for any infraction on an wildly broad spectrum of behavior. We are in constant rearrange-the-deck-chairs on the Titanic mode, with apparently no ability to unite and take control and lead ourselves onto the lifeboats and to safety. We can’t stop self-examining and self-flagellating long enough to discover if there are any good people left among us, or if instead there is some tragic flaw once embedded in in our past that proves we are indeed irredeemably bad and deserving of exile. Maybe everything we are tearing down will all get rebuilt in a different image, maybe it won’t. Maybe the future of the Oscars will have nothing to do with America’s population at large, but be reduced to a small cadre of folks who have policed the shit out of film and now celebrate what’s left, like monks poring over relics.

Then again, it might have as much to do with Trump’s strict divisiveness as some of us are beginning to suspect. Maybe it’s alarmist to wonder if the Oscars have irrevocably become a partisan issue. It could be nothing more that the recent 5-year span of Oscar movies that many regular moviegoers find less accessible. It could be a number of factors woven into our changing times. There’s no one answer. No single explanation. There are a lot of reasons why ratings are taking a dive. Here’s hoping with so many popular films in the race this year, we might see an uptick in ratings so the industry leaders and Oscar lovers can all relax. Then we can panic about more important things.

Podcast Alert - All this and the Oscars Too