Widows stars Michelle Rodriguez, Viola Davis, Cynthia Erivo, and Elizabeth Debicki as four indomitable women left to pick up the pieces after their husbands die in a heist gone wrong. Set in Chicago, the film is also about the political and social climate of the sprawling city, not just the heist that these women are planning to carry out. Costume designer Jenny Eagan worked with director Steve McQueen to craft the look of these characters. Her most important step was visiting the various neighborhoods of Chicago to understand where these women would come from, what they would wear, and she created her outfits based on that research.

We spoke to talk about colors and how the narrative arcs shaped each widow.

The one thing that stood out was the wardrobe. What did Steve say to you about the movie and the look of the Widows?

I love talking about Steve. I loved working with him on this picture. He’s very collaborative. The great thing about working with him is that he really wants everyone to be involved and it’s a great thing and a nice thing to be a part of. It was really important to him to start with Chicago. We are in Chicago. The women are from there. They’re in different classes. They’re different races. Who are they? It was really fun to go out and research it. I spent time going out and seeing the places where we were going to shoot. I got to know the neighborhoods where they were from and what worked in Chicago and how these women would assert themselves in a city like that.

It wasn’t so much about the clothes. It was about the character that they are. They had a place to go, an arc. He was very open. There were a lot of discussions about palette and colors. Once you have those conversations with him, he wants the truth and he wants to know what exactly doesn’t work for you as a woman and what’s scripted. It’s very collaborative.

What did you learn from that research to help craft the characters?

It’s not so fashion forward. Not everything is available. Veronica’s character had money, but it’s in the city. The people you run with or your group has to have a similar style. I don’t know if Veronica is fitting into a mold as such, but she has the money and can afford some nicer things that might be in the nicer parts of Chicago. It all comes down to socio-economics. It’s about what you can afford. It’s also how you want to portray yourself. Alice had a low self-esteem and confidence. So, by showing her figure might appeal to men and getting a man to change her life. Having to show her body was maybe something she thought was important to get the man and to get that security. With Linda, she was hard-working and taking care of her kids. That in itself is a busy job, so having a business on top of that, we kept it subtle. You have to be able to move a lot. Her transition is gaining confidence and moving into darker tones and taking charge of her own life. Cynthia’s character ran a lot to get places, but it saved money. She cared more about saving money and not worrying so much about clothes. The money was going toward getting a better life and not going to fashion. I thought that was the key thing, Steve wanted it to feel like real-life and not like a fashion life. 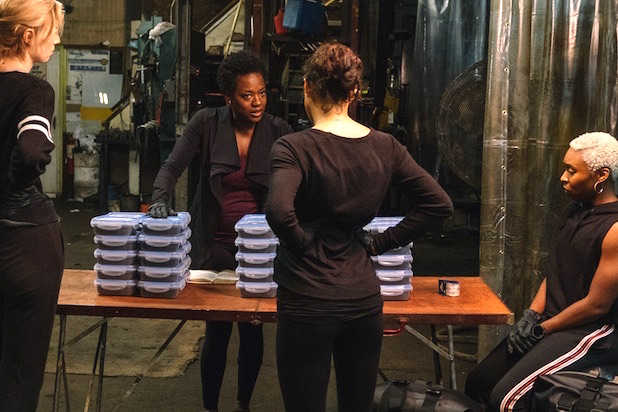 You mention the character arcs and their wardrobe changes.

What was interesting as we look at each of them. Veronica comes across with this utter confidence. I think women look at that with envy or look up to her or think she has it all together. Clothes can mask an appearance to what’s really going on inside. I think by them seeing her, it was something intimidating but she has it together and how can I strive to reach that feeling? I think when they each got that confidence, it was taking a step towards, not as concerned about fashion, but about what was important in their lives and the goals they wanted to accomplish within this. It’s about ease and effortless. It’s getting away from putting on a show. It’s about wearing clothes as an aid to what I have to get done with this heist. I think they look at her and she’s a leader in all aspects. It’s subtle.

I used pieces from their “past” but I incorporated it differently and made it simpler. I think the color palette gets darker and furious to say they’re in charge. That’s what helped us. It’s subtle but gave us a push.

How did the men contrast here, being the less significant players?

They were fun. They had such subtle things too to tell who they were. Colin Farrell’s character has this Midwest style. Very conservative politician and the rules are written with the blue or the grey suits are very strong. I wanted to give the opposite effect with Brian Tyree Henry’s character. He’s striving to be that politician. Again, we don’t have the same amount of money or influence, but he had still come from something. I think the tones were softer, we put in more earth tones on him.

Daniel was just fun. He’s so strong in this. I wanted it to be a simple uniform for him with the leather jacket and jeans. He had his thing. He knew his style. It was intimidating. It was clean with no patterns. There was no fuss but a “I know who I am and you better know who I am” kind of guy.

Liam. I mean he’s just fantastic. I wanted him to be the husband you don’t know what’s happening. We went back and forth. Where was he getting his clothes? Is he still the same guy. He’s sexy but a bad guy.

OK, that red top. Steve and I went back and forth on it. That’s the ultimate thing. She’s so confident and she is in charge. It just crumbles. As she leaves, you see the red. It was a bold choice but it was fun. It was a real discussion that we had.

That worked against that background of that apartment because it’s so bold. How did you collaborate with the production designer?

You want to get to know the directors, the production designer. If you put her in blue and the chairs are blue. She’s going to disappear. It was really important to get that sense. It was very modern. Everything was so simple. She’s a strong woman. I think she wore floral once. We reused the pants. It felt that the white, greys and navy were just so sophisticated. It’s easy and it works together. I think that of solid tones. I thought the tones played really well with where they were and her apartment. We could marry the person to the house. I feel as if I walk into a person’s house, you can have an idea of what that person is like. Of course, this is what their home looks like. It’s what I expected.

Did you create or source the outfits?

We did a bit of both. Some were made. Some were purchased. The blouse. The navy jumpsuit she wears was made. It’s a mix of both. Sometimes you find something great. I made all the jumpsuits they were in during the heist. The idea for that was they had got those at an Army & Navy or surplus store. We had to make them so that they fit each of them to look like a man, but a little bit better. I wanted a bit of sheen in there so the camera could pick it up. It depended on who it was. It was more sourced and shopped than made.

When you’re working with Steve who is so collaborative. He wants his cast to work with the team so it really opens it up for you. It’s such a special experience. He really encouraged everybody to be a part of the city. He wanted us to be in that city as one. I know everyone says that when you get into the wardrobe room, you start to find the character. It’s such a cliche. Finding that one piece that says, this is Alice or Veronica. My fitting with Collin was 20 minutes. He came in and said it was all right. I give them the tools and they make this character their own. If they feel the tie or button needs to be undone, play with it, it’s yours.

It was really fun to do and to create those characters. They’re such great actors that you don’t want to steal from them. They bring so much to the table.

I loved how it was so subtle.

We did that with Michelle’s Linda and Alice. I felt those were the biggest arcs. So we had soft prints early on. But with Cynthia, she knew exactly who she was from the beginning. She learned along the way, but she was grounded in that character.

Michelle’s arc was great. The vulnerability of her character and her wardrobe. Especially as we hadn’t seen her dressed like that.

With Linda, I thought it was great to put her in a pencil skirt. In the beginning, you understand who she is. They all click in and that’s when you see the good arc. Michelle was fun and open. She’s so talented and Steve was so excited to work with her. I think we all had such a happy family.