Completed in 1611, Hatfield House sits close to London which makes it convenient for film shoots. The Jacobean estate has served as the perfect setting for many Hollywood films including Wonder Woman, Batman, The Crown, and even Harry Potter.

Yorgos Lanthimos and production designer Fiona Crombie chose the location for The Favourite, transforming it into the locale for Queen Anne’s court. Crombie collaborated with the costume department to set her palette. She also stripped out much of the original furnishings, built extra panels, secret doors, and additions as part of the magnificent regal transformation. Crombie says she noticed there was a lot of black, white and gold, and that’s why much of her palette was based on that.

Hatfield House was such an amazing location to set this film. How did you decide that would be the perfect location?

The thing with Hatfield House was that we looked at it quite early. I remember looking at it a year before we even started shooting. Availability was so crucial. It’s such a beautiful location, but it’s also a film-friendly location. We were able to use candles there and there are so many of these historic homes and incredible buildings in this country where you just can’t use any candles at all. So, the kind of viability of the film hinged on whether we could get a location that allowed us in and at a certain time of year. They make a lot of their money by being open to the public. We needed to obviously take control of it. It was a really important thing to lock that location and we did lock it early.

They allowed me to put in construction and to be able to build in their spaces. I could add and take away and remove art. I could do all sorts of things where they easily could have said no. But they were incredibly supportive of the film. 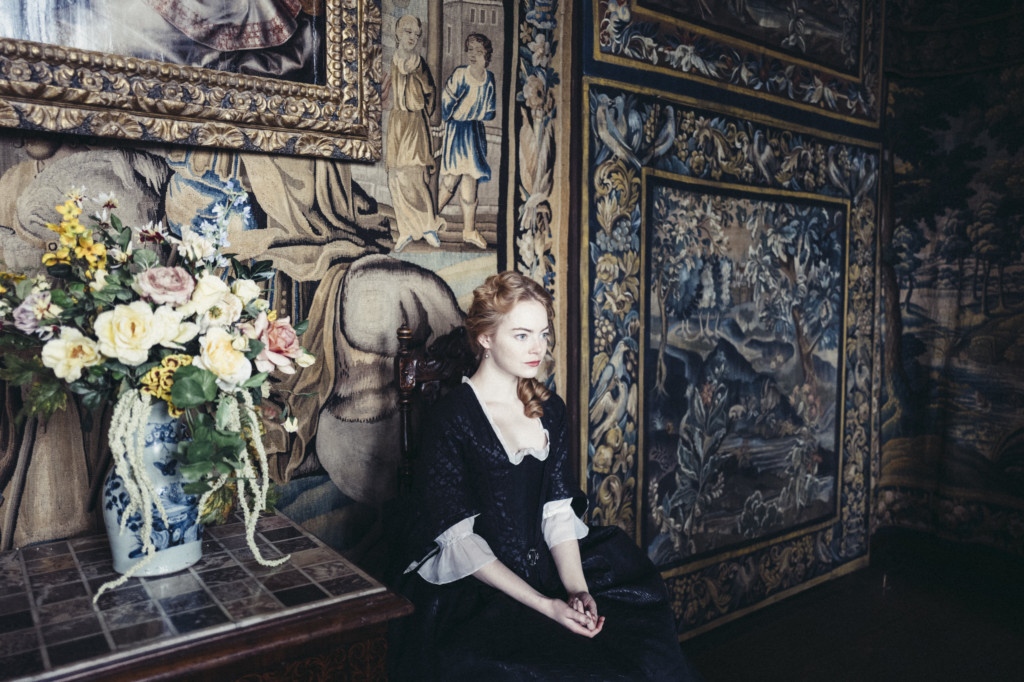 Hatfield House has been used so many times in film and TV. What did you do to make it almost unrecognizable in order to transform it into Yorgos’ and your vision?

I think the basic thing is we stripped everything out. We took down all the curtains. There were certain things that couldn’t go, such as this incredibly long table and things that you couldn’t get out of the room, so we’d integrate them into our decoration. Once we had the rooms empty, we’d already done our dressing plans, we built our secret doors, wall panels. There’s a big section in the Great Hall where we built an upper section. We needed to bring it into the story. I took endless photos of the detailing around there. So, the hand carving they had on the Queen’s bed is copying from hand carvings that you see around the house. The black tiles that you see in the Great Hall, we put into another set. I was making sure we had loads of threads, architecturally so that you can’t tell where I began and ended and where the house began and ended.

When they do the carriages outside, that whole facade is a whole set build where we clad all of that exterior. They’ve got this addition that is random. We altered it so it disappeared back into the house so it looks more complimentary.

How did the flooring such as the black and white tiles we see, influence the color palette?

The main influence on the color palette was knowing there was going to be the monochromatic costuming. So, knowing that there was going to be very stark costuming with the odd pop of blue and red, meant that I had to figure out to fit as a bridge, using that decision and using a location that has inherently textures and color. Once we stripped everything back, we realized the main colors were black and white of the floors. There was gold and there’s also a lot of dark wood. We only used gold. All of our fabrics and drapes and soft fabrics such as her bed were all gold. I kept it a tight palette so it didn’t feel chaotic. I wanted to avoid making it too busy. It’s completely historically accurate and that’s why it felt absolutely right to not have any rugs or make it feel too soft. The sheen off the wood was important.

Let’s talk about Queen Anne’s bedroom and designing that.

I put together a bunch of references that were paintings, illustrations and some contemporary work that resonated for me. the thing that kept popping up was this play on scale. There were enormous beds, almost like show beds. That period is an interesting period in design because there was an incredible mix of really fine objects, and then some really brutal objects. There were massive forks next to hand-blown glass trinkets. We thought it was fun to play with those design elements.

The main thing about her bedroom was putting this bed into that space. It’s a focal point, but she also spends a lot of time in that bed.

There was space. Yorgos was clear from the beginning that he wanted freedom and movement for the camera so we never overfilled a space. They’re quite empty actually.

There’s the Long Gallery which has a lot of walking and features. Talk about the design there.

That was about the elements that we put into that space. We changed the chandeliers and the detailing. That Gallery was a gift. When we were putting our stuff in, they were gilding the ceiling. It’s such a beautiful job to be spending your days gilding a ceiling, so we were lucky. 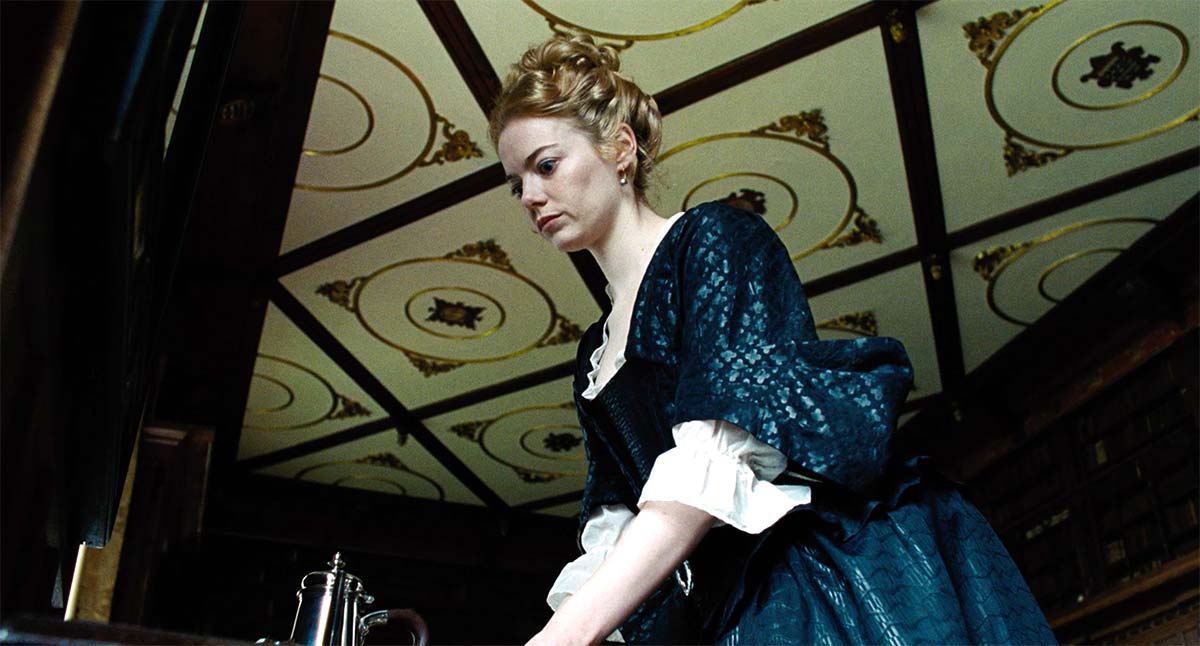 Yorgos also used candlelight for shooting. What were some of the main challenges when it came to production design?

The main challenge was how to have enough light in those rooms and justify them so they felt compositional. We didn’t want it to feel like we were stuffing it with light. Again, we played with scale. We had some enormous candelabra and we had tiny ones too. In a lot of those spaces, we played with the formation of different heights. We were very compositional in the frame so things didn’t feel like they were plonked. They were all in groups and had to have visual strengths. How we justified them visually.

There were practical things too. You can’t just drop wax on the floors, so we had people there all the time. We had people replacing those candles because they just burn down. There were two guys cutting candles and replacing them. The people from Hatfield House were inspecting the house and where the wax was going.

It just looked exquisite. Especially with the use of wide lens so we see everything in the frame.

You don’t often see films that see so much in the frame. Even though it’s always all there. You rarely see a ceiling, a floor and suddenly he whip pans and you see behind the camera. It’s incredible. We were so fortunate to really enjoy that location. For them to be so supportive, they allowed us to do all of that. I don’t know how it could have happened anywhere else.

Best Actress — Most Competitive in Years, Will Publicity Make the Difference?