“He Wanted The Hair To Look Lived In.” Nadia Stacey On Working With Yorgos Lanthimos To Create The Hair and Makeup for The Favourite

The striking thing about The Favourite is how natural and almost messy the women look. They look far from regal. Makeup free, hair looking lived in. It was just the look that Yorgos Lanthimos wanted Nadia Stacey to create for The Favourite. “We put concealer on Emma once and he went up and ran his finger under her eye and sent her back.” She says. “He didn’t want us to use hairspray and he banned it from set.”

Read how Stacey worked with Lanthimos to create the makeup and hair for Queen Anne’s court in The Favourite.

How did you create the look of Queen Anne’s court?

From the beginning, it was the usual process of researching that whole court meticulously. I think you have to know those rules before you can break them. If you’re going to take on a Yorgos project, you know it’s not going to be standard. It’s not going to be a normal period drama, so finding that difference is really hard. I thought I needed to know what it is so I didn’t look like I got it wrong.

I researched it and went back to him and said, “In 1704, it would have been…” He jumped in and asked how we knew. I told him it was in the history books. He said, “We weren’t there, so who knows? We can just play around with that.”

The main thing I did was to get the basics right. So, whether that was the silhouette of the hair so the shape is correct. Men did wear big wigs and had the makeup. Once you have that, you can mess around with color, style, and maybe paint the faces differently. It was taking every element and twist it to see what he liked.

I would take lots of different prototypes to him. He’d constantly push me to find something new to do.

You got to create these great wigs and the makeup. With the women, they’re more natural and nowhere near as made up. The hair on them too is more lived in, again natural.

Starting with the women, he absolutely didn’t want any makeup. He’s not a fan of makeup in his films generally. This film is about those three characters, the makeup could not be a barrier or an obstruction. We couldn’t be looking at them made up.

With a lot of period dramas, there’s a lot of cheat makeup to have everyone look beautiful. He was really against it. We put concealer on Emma once and he went up and ran his finger under her eye and sent her back. We did try to cheat, but he was really strict about it.

Queen Anne was a little bit different. I stuck to the rules more with her because you could look up and see what she looked like. With Rachel and Emma, we really played with that in terms of character and where they were going. We softened the look. He would get into the hair, and move it around. He wanted it to look lived in. He wanted it to look like they’d been up for hours.

For the makeup, I started with the white face, very blended and beautifully done. He asked, “How could we do it so that the skin looks bad, and it looks cracked.” I researched how they put lead paint on their faces. We’d mixed in lots of different mediums so it looked layered. Again, the sweat was running from the cracks just to make it look gross.

I think that’s really what he was trying to capture. It was scary to do it at first because he just wanted that natural look. He banned hairspray and we were not allowed to use it. He liked the fuzziness.

It was all about keeping it authentic.

How do you overcome that challenge when he says no product, especially as you have wigs that are ten-miles high?

It was and will probably be one of the most challenging things I’ve ever done. That hairstyle is called a fontage. It’s got the height and piled. He didn’t want perfect curls. He really liked the look of oil paintings. That’s brush strokes and not how people’s hair looks. It was really about going back to the drawing board. We’d build smaller pieces to hide in the hair.

All three of them have 3/4 wigs. We never had to worry about wig lace because he would not have wanted that. Everything you see at the front is their hair. Olivia’s grey hair was left – she doesn’t have many. We didn’t pluck their brows. We asked them to grow them out. They really let those go.

It was a challenge to figure out how to do that without it looking like a mess.

Fiona and I spoke with Sandy. We had so many conversations about how we were going to do what we had to do, but somehow it just all came together and it worked. You suddenly understood what he wanted.

How much time did you have to prepare?

I met for the job about 18 months before it was shot. I was hanging on to this job for so long, just in case the film happened. One night at 6pm, I got a call to meet him. I had five weeks to turn it all around.

The film looks financially richer than it is, to pull the wigs off in five weeks and to figure out what he wanted, was something I thought I’d never do.

I’d watch TV at night and make wigs or wash them in the bath. The luxury would have been to go to a wig house, but we just didn’t have that luxury to put it all together. I was often driving home and I’d think I couldn’t do it. But then, I’d see a wig and know I could.

He did. He named them Barbra, Hattie, and LouLou. I think. He just had no idea what he was going to look like, but then he threw himself into it. It was brilliant. His character was great because he had the most change of wigs. He’d do fancy things for the ball or other times, just have a simple look. He had three or four wigs.

Altogether, there were 100 wigs for the men including the foot guards, courtiers. We couldn’t even source that many if we wanted to. We’d make them from scratch.

The women needed the hair pieces made. The ballroom scenes looked different because we had that black and white theme to match the floors. We sprayed them with chalks and different colored sprays to make them different colors. 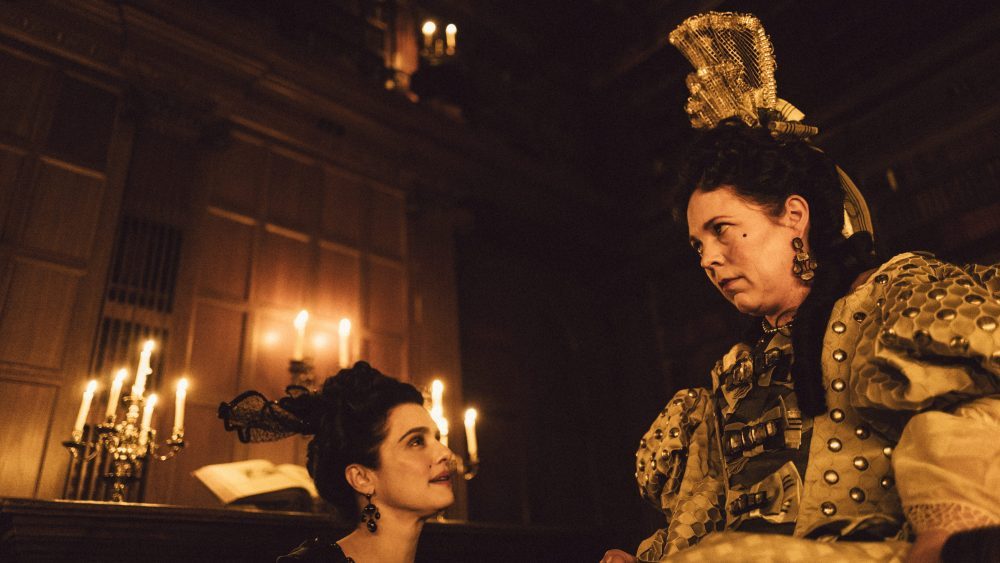