by Sasha Stone
in Gurus of Gold
50

The Gurus of Gold assembled for what is usually a pretty good idea of the race. I think some of us are holding onto movies we really don’t want to let go of. Many of us can’t figure out what can beat A Star is Born, if anything can. While the choices aren’t quite “all over the place” – they have mostly gathered around A Star is Born vs. Roma.

But I have to add here that Nathaniel Rogers of The Film Experience has Black Panther to win. Ridiculous you say. Well, over at Gold Derby Anne Thompson has it at number one too. Look, it isn’t the craziest idea that if it gets in at all it could win. If it has enough support to become a nominee it might have a good chance to win it. Stranger things have happened. And Return of the King did bring home the gold in a clean sweep for Peter Jackson and that was a genre movie. Yeah but Marvel, superheroes, I know. The thing about Oscar advocating that a lot of people don’t know is that if you do it overtly, you are likely to find yourself disappointed by the end of it. No one likes being told what they should and should not vote for. And they really hate being forced to vote for something they don’t like. Anne doesn’t do that. She’s stealthy. She quietly pushes contenders that need support and because most of the time she is objective about her picks, the advocacy can slip through undetected. She isn’t the only one who does this, of course. To know your predictor is to know their secret biases.

Anne did this with Ang Lee for Life of Pi (he ended up winning Best Director) and George Miller for Mad Max: Fury Road (it didn’t win Best Director but it won more than anyone thought it would). Has she pushed contenders that didn’t ultimately get in? Of course. But her choice of Black Panther at number, like Nathaniel’s, legitimizes it as a serious contender and not a borderline nominee.

Anyway, something to think about. I am remaining skeptical on that until I see some kind of sign that will tell me the industry is okay with awarding a franchise movie like that. If they’re going to do it for any movie it will likely be this one.

Here are the Gurus for Best Picture – you can see the rest of them, as well as links to all of the Gurus AND Doc Feature and Foreign Language by clicking here. 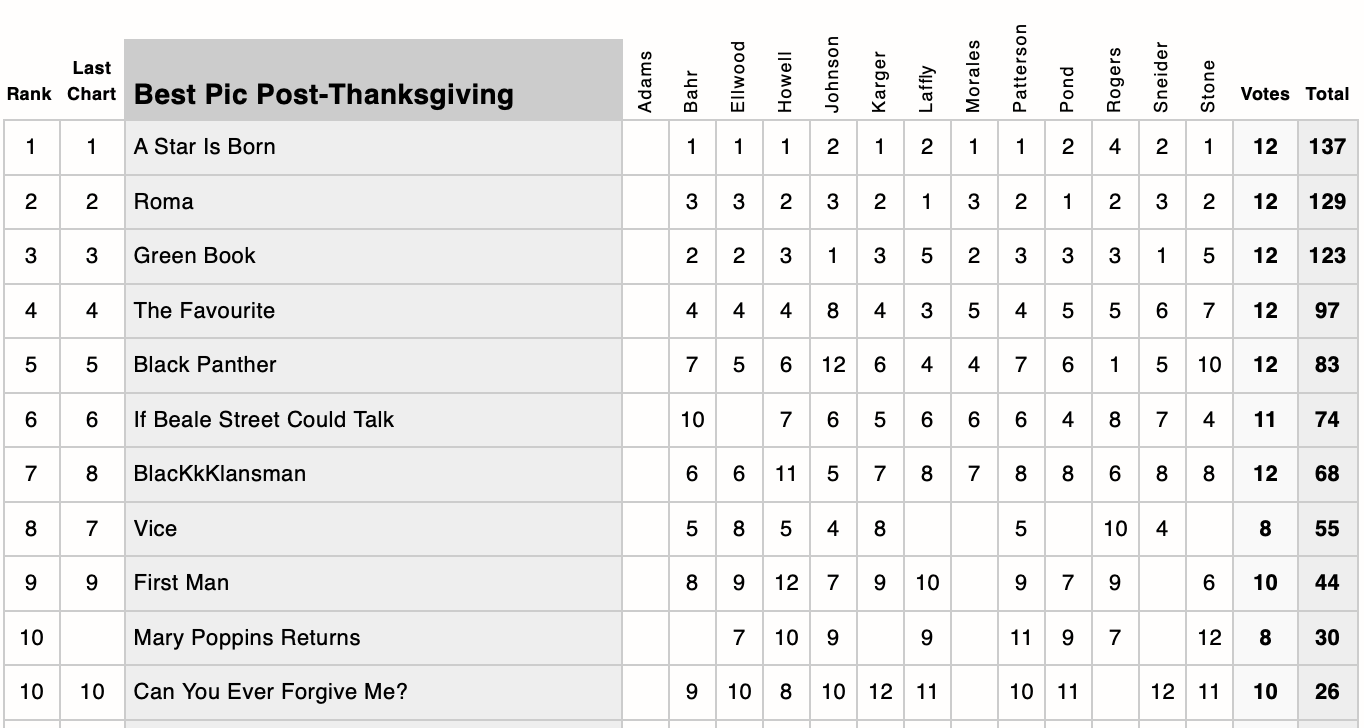 by Shadan Larki
0
No Result
View All Result