Costume designer Alexandra Byrne is no stranger to designing period costumes, and no stranger to recreating the world and royal courts of Queen Elizabeth and Queen Mary.  She has worked on films such as Elizabeth, Elizabeth: The Golden Age and Hamlet, and traveled to the Marvel universe to create costumes for Thor, Guardians of the Galaxy, and Doctor Strange.

When Byrne took on the challenge to create the royal courts of Queen Elizabeth and Queen Mary, she found red to be influential on her color palette and denim turned out to be her most useful resource.  Among her many challenges was the importance of dressing men in the court to look aggressively sexy.

Between Mary and Elizabeth alone, she designed over 65 costumes. To dress the entire court, she created over 2000 costumes. Every costume, Bryne tells me, had to be handmade because she couldn’t source an Elizabethan house.

Denim became her best friend since it allowed her to make the versatile and durable components required for the costumes of Mary Queen Of Scots.

You’ve dressed Elizabeth before, so how did you tackle her again here?

I came to it with a knowledge of what it takes to make the costumes and what’s available in the costume house because you’re not just dressing the principals, you’ve got this massive world here to dress.

That was on two fronts. The practical side, I knew nobody had done this period since I’d done Elizabeth: The Golden Age. So, it would be the same old stock, eleven years older and tied on hangers. None of that world seemed right for the story that I was reading. I felt it needed to have a modernity and accessibility.

I felt what I was interested in doing was trying to limit the number of materials that I was working in so that I was trying to manipulate a fabric to tell this story. What I didn’t want was here comes another queen in another frock. I had a color palette in my head. You have two red-headed queens which is a massive component in the color.

There was also the challenge of how to make Elizabethan men sexy. I felt the story is about these two women on the throne in a very predatory male world. There were a lot of things spinning in my head.

Denim was the solution. Men lived on horseback. They lived in their clothes. They sweated into them. They dried in the sun. Their clothes would have been a second skin, almost molded to the body. I wanted the idea of the dirt and the pattern to become part of the decoration. The men lived on horseback, the rode for miles. Anyone who has ridden knows that their inner thighs get this black dirt. Their clothes would have been thick with that. I wanted that to be part of the decoration and embellishment of the costume.

Also, we shot in Scotland in the rain and the mud. Clothes were going to get filthy as they would have done. I wanted that to become part of the language of the clothes. This idea of denim ticked the practical box in that it’s a factory friendly fabric because I’d have to make all of the background characters. That needed to be done on a keen price point.

It was also this one fabric that I could manipulate in order to tell the story of the two queens. I did break out of denim at five moments when I take them out of that for the known portraits of the period. I needed it to have the punctuation of the history that we know.

That was a frantic starting point, the first stab of it all.

The story was so different from what I’d done with Elizabeth before that the history allowed me to make this leap. I tend to work by needing to know a period by researching it so that I’m in control of the decisions I make. I could make that leap based on the knowledge that I had and it allowed me to be free in my decision making.

The big thing is that the two queens never met so we’re not making a documentary and that in itself was liberating.

Talk about the distinct color palettes between the two courts and how it changes on their journeys.

The journey to the throne was very different and that informed how they ruled. Elizabeth was very bright and very strategic from a young age. She was compromised by her step-uncle. She was sent to the tower. By the time she was Queen, England was a very wealthy country so she had that stability. She sat on a very sophisticated pyramid of power. She was supported by the Lord of Walsingham who was loyal to her. He was a very astute politician and spin doctor. He also operated a very sophisticated network of spies. She was also a Protestant queen in a country that had been Catholic. I think she really emphasized early PR in that she understood the power of her image and she used it to replace the iconography of the Virgin Mary.  I wanted to make her dressing very strategic. It’s as if she has a Net-a-Porter account and she goes out to buy outfits and by changing color, you’re changing outfits.

She contracts smallpox and is already undermined by reports of Mary’s charisma and beauty. There’s a complete loss of self-esteem and the thought that you might die from this disfiguring disease. Mary has given birth to an heir and that’s when I take the color out of her and that’s when she goes very monochrome and goes under the radar until she drags herself back up to this meeting with Mary.

Mary was Queen of Scotland when she was 6 days old. Her mother sent her to France and she was brought up by this very sophisticated family with a French-Catholic education. She was Queen when she married a Dauphine and was widowed. She was kicked out by her mother-in-law and she returned to Scotland in mourning stripped of her jewels and her lifestyle. Her approach is very pragmatic.

Her journey is more evolved. She is wearing white because she’s in mourning and that’s what they wore. She’s kneeling in the surf and you begin to see the indigo of her under layers bleed through and that’s the color for Scotland. That’s the beginning of her transition of her going from being a French widowed queen to taking her place and making her role as Queen of Scotland. Scotland at that time is a very poor country. She didn’t have a standing army. Her lords had no sense of nationhood and were open to switching sides and allegiance for the gain of money and land. It was a very unstable country.

It was tricky times for her.

The red in the two was so striking. What was the symbolism there?

It was historically accurate. She wore a black dress and underneath that she wore red. She wanted to be remembered as a Catholic martyr. There’s really no other red in the film and so I found the reddest red I could.

The men. How did you make them sexy?

The challenge was that. Men’s sexuality was all about the crotch and their leg. So, I gave them high-waisted, crotch-centric trousers. For the Elizabethan silhouette,  I was working on another film and there was a rigger on the crew who had those hip belts with their kit. I watched them walking around and there was something empowering about having this low hung belt with your kit on it. I used that idea to make these belts with pockets and pouches to match the silhouette of the Elizabethan man.

I was reading this article written in the 16th century about a man taken to court for having his britches overstuffed. He took out all his possessions. He was using them to store his belongings.

The other thing we had to do was knowing we were shooting in Scotland no matter what the weather. What was wet weather gear in Elizabethan Scotland? She would have to live and survive in that. We only had portraits to go on. Once I explored it enough, I had to create the full wardrobe.

In one day, we had bright sunshine, driving rain, and hail. 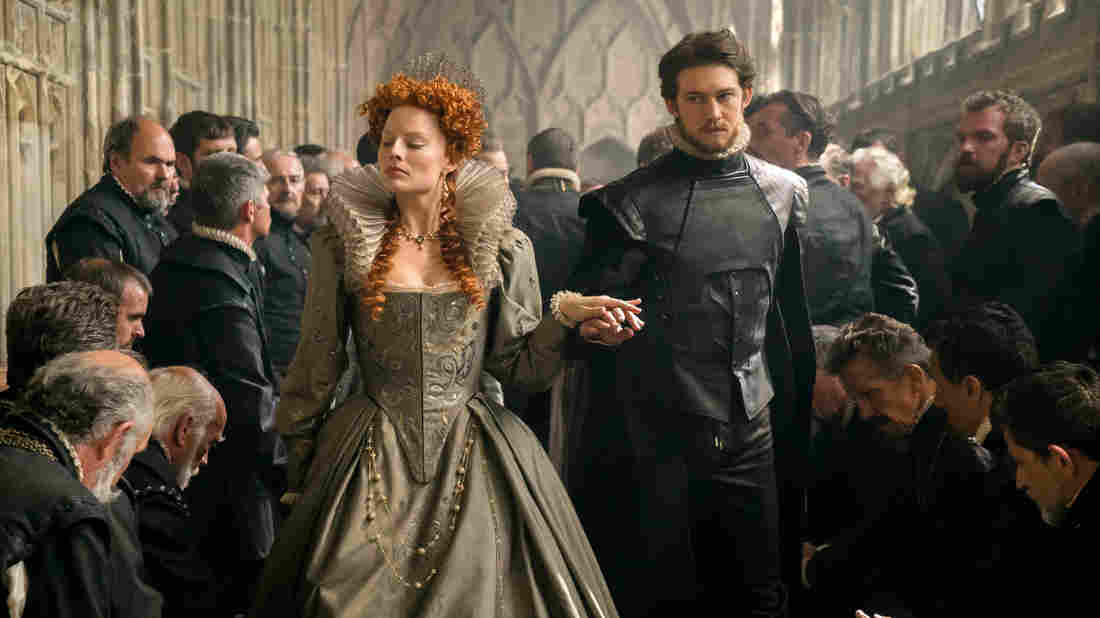