Best Director: The Master Class and the Up and Comers

The influence of Paul Schrader and Spike Lee on American film is immeasurable. Can you imagine American cinema without Taxi Driver or Do the Right the Thing? Taxi Driver launched Martin Scorsese’s career, and solidified Robert De Niro as an instant legend, not to mention making Travis Bickle a permanent fixture in the psyche of our troubled crippled country in the wake of Vietnam and the damage done by all the wars since. But Taxi Driver sprang not from the mind of Scorsese, who brought it to vivid, haunting life, but from the dark and conflicted mind of its author, Paul Schrader, one of the biggest deals to ever hit Hollywood. It’s unthinkable that he has never been nominated for a single Oscar. Yeah, you heard that right. Never. Not for the classic films he wrote, like Taxi Driver, Raging Bull, The Last Temptation of Christ. Not for those he directed like Cat People, American Gigolo, or Affliction. There has never been a comfortable, tidy, neat little box to put Schrader in. He is not now nor has he ever been a peddler of dreams, public relations agent for our better angels, and not one to lie about happy endings. No, for Paul Schrader it’s always through a glass darkly, pitch black in fact, the darker the better. Realists among us know what Paul Schrader knows: that this is no walk in the park, human existence.

How can the Academy branches of writers and directors explain away the utter absence of Paul Schrader from their annual celebration of high achievement in film? Well, it isn’t easy. Because how do you convince thousands of unsuspecting dream junkies to gather around something that feels like eating razor blades for breakfast?

Does Schrader even have in him the kinds of stories that make people feel better about themselves? While he hasn’t done that with First Reformed, easily one of the best films of the year, he might have finally found enough people willing to take a walk on the darker side of our better selves. First Reformed isn’t really even about how dark we can be as tormented individuals. It is more about the results of unrestrained capitalism’s hot affair with human indulgence that has wreaked havoc on the planet, traumatizing the planet so severely that there may be no turning back. I know Schrader believes there is no turning back. I know that most scientists agree with him. And that is why I know his ending doesn’t offer hope in that sad tale. Rather, it reminds us to hold tight to whatever we have left. 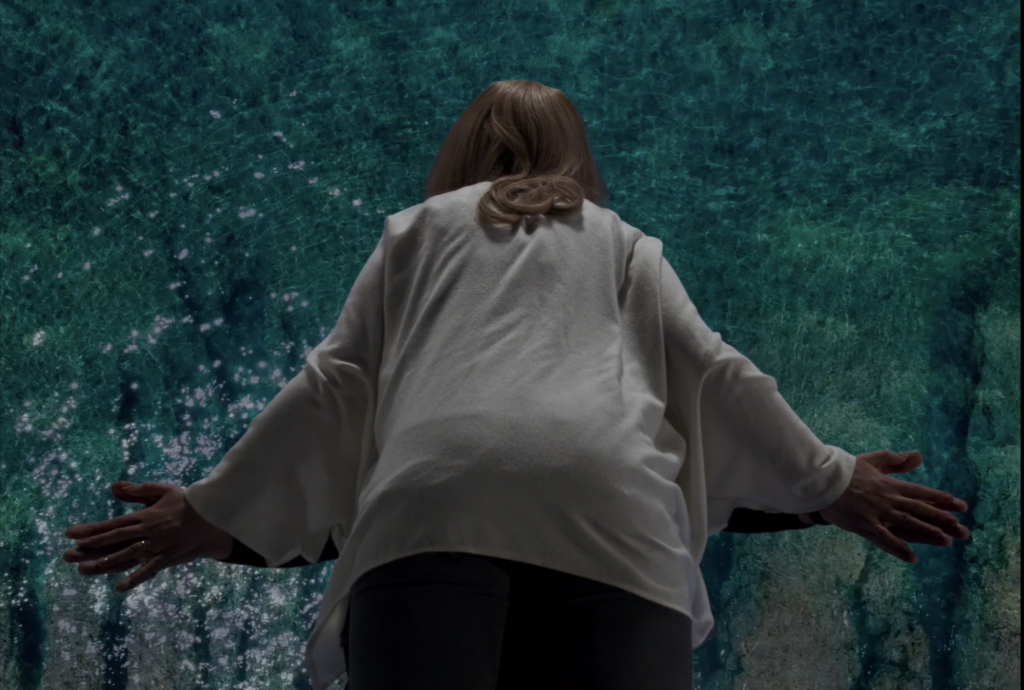 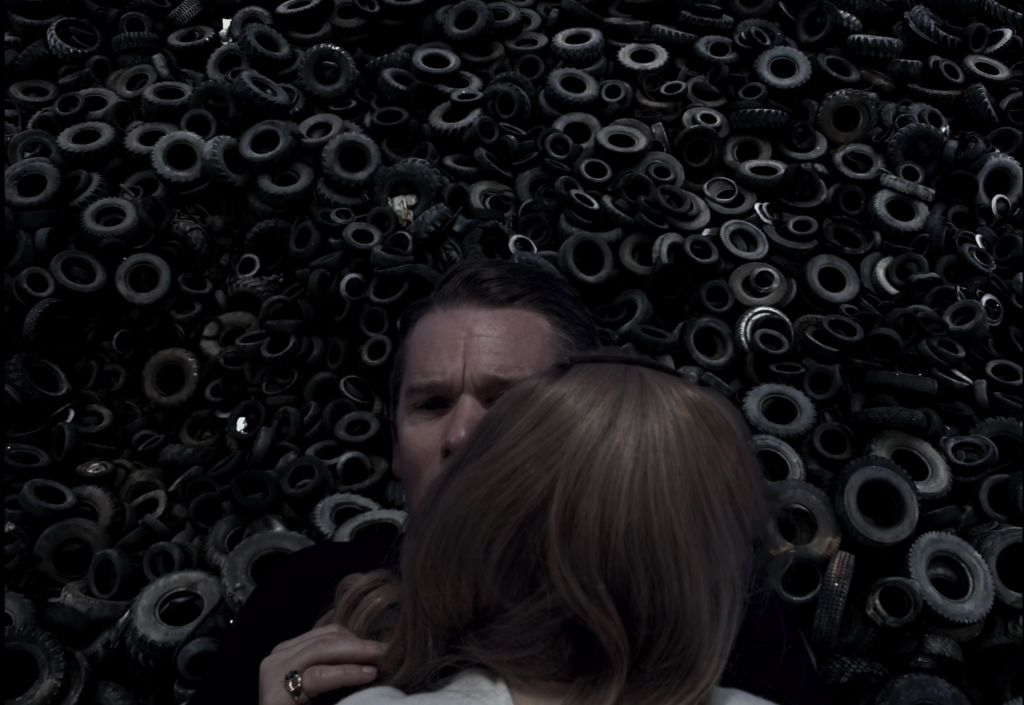 First Reformed makes no attempt to hide its religious metaphors. Amanda Seyfried’s character, pregnant and alone, is named Mary, for god’s sake. One of the film’s most moving and discomforting sequences is when Father Toller and Mary (Ethan Hawke and Seyfried) are pinned together with such reverence that they break the bonds of mortal existence. She becomes an angel, or one of Dickens’ ghosts of the past, present and future, guiding him and us through first the beauty, then the undeniable infamy of our species.

Will the Academy recognize this film and Paul Schrader’s overall career contribution our country’s cinematic legacy? Well, if the race so far is any indication, what many of them want is fantasy, happy endings, and oodles and oodles of box office dollars. Popular movies, don’t you know, will save the Oscars.

First Reformed ought to be recognized not only for its writing, directing, and acting, but also for cinematography, and of course, Best Picture. Most pundits are unwilling to go there, however. They don’t want to be wrong. Even if it’s right.

Similarly, Spike Lee is one of the most influential American filmmakers whose work spans three decades. Film, television, music, sports, even clothing and interior design. It’s hard to think of any artist who has had such a broad spectrum of influence. He, like Schrader, has never made films that make people feel good about themselves. Well, not white people anyway. His films have always been designed to provoke, to agitate, to challeng,e and occasionally, like Schrader, to delve into the mysteries of lust and human sexuality.

When Spike Lee burst onto the scene with She’s Gotta Have It, and later with Do the Right Thing, his style was boldly and aggressively present. His films throbbed with vibrancy. He sprung past the familiar for and stuck the landing in the dazzling radical new. He invented an electrifying kind of filmmaking that no one has ever dared to try to imitate. You can see his influence, however, in daring filmmakers both black and white — those who confront the viewer directly. But has anyone ever brought to life a neighborhood like Lee did in Do the Right Thing? They called him the black Woody Allen at the time. He was daring to write and direct and star in his own film. His ego and his attitude were unchecked. He didn’t bother courting Oscar. Like Schrader, he was not interested pursuing that path once he saw what he would need to give up to be accepted into that world.

BlacKkKlansman, like First Reformed, is a movie about right now. It is so much about right now that it caps off everything it has done in a remarkable coda that focuses its sharp lens directly on 1600 Pennsylvania Avenue, and by extension, those Americans (and non-Americans) who helped put Trump in office. Lee indicts Hollywood’s usual style of telling our American history, by making us look at how little of it has changed. There is no doubt that his film isn’t an easy sit. As funny as it is, as well acted and directed as it is throughout, it is chilling and depressing that in 2018 we helped elect a man who has emboldened the slimy underbelly of America’s oppression that decent Americans have been trying to vanquish for decades.

Spike Lee won an honorary Oscar three years ago because the Academy at last saw the gaping omission in their history. How could they hope to embody the best of American filmmaking without any recognition of Lee|? But this year, it looks like Spike Lee will see his first Best Director nomination — no kidding, his first for directing. He’s been nominated for Best Documentary, and he’s at least been nominated for screenplay, which Paul Schrader — arguably the greatest living screenwriter — never has.

If this was the right Oscar race, both Schrader and Lee would represent the masterclass nominated for Best Director. But we know that we don’t live in that kind of world, Thelma. We just don’t. These two are going up against relative newcomers. Some deserving of praise. Others, give me a break. But none of that matters because those of us who cover the race know how these things go. Even if some people out there believe we exert pressure, that we limit the choices of voters, that simply isn’t the case. We don’t. We just, by now, know the score, that’s all. They don’t call it a popularity contest for nothing.

As it stands, we can all call Alfonso Cuaron a master. His Roma, as everyone already knows, is not just a master class in directing, it’s a master class on memoir writing, on paying tribute to those whose presence was so significant that they end up becoming the single most important influence in an artist’s life. For Cuaron, the women who nurtured him made all of the difference, because even as they fought for their own happiness, they were the force that held families together in the wake of the wreckage left behind by the men who came and went, used them and then discarded them. Cuaron has already won Best Director at the Oscars for Gravity, and his nomination for Roma will only be his second.

Damien Chazelle is ever so deserving for his brilliant achievement with First Man, though no one really thinks this is his year. Too many people wanted science fiction, not science. They wanted to feel fearless, feel cocky — not feel the concern and anxiety of what it was like to be flung off the planet in a rattling capsule. On the one hand, they wanted to feel like patriotic Americans, and on the other hand they really didn’t feel like celebrating the milestone of a white male American hero. None of that has anything to do with what Chazelle did with this daring, original movie.

Bradley Cooper is a first time Best Director contender and automatically makes the cut for birthing a $200 million dollar baby and a cultural phenomenon. Although it’s debatable whether or not it’s the “best” version of A Star is Born, there is no question that he took what was familiar, gave it an appealing update, and brought it to life in new and interesting ways. Watching Cooper transform himself into the broken musician he plays is also a testament to his talent as an actor. But really, it’s how he brings Lady Gaga’s singular talent to the big screen that makes A Star is Born what it is. He’s in the mix, there is no question about it.

Ryan Coogler looks more and more like a strong contender for Black Panther, but it’s hard to know how that one will land. Barry Jenkins is also still possible for If Beale Street Could Talk.  Peter Farrelly could find himself with his first Oscar nomination as an unlikely Oscar contender. He follows in Adam McKay’s footsteps in transitioning from comedy into something more serious. As good as Green Book is, can it overcome the shitstorm that continues to drizzle? It’s hard to say. In years past, it would be a shoo-in but in this day and age it’s hard to fathom the mysteries of perception.

Other standout up and comers this year include Bo Burnham for Eighth Grade, Ari Aster for Hereditary, John Krasinski for A Quiet Place, Boots Riley for Sorry to Bother You, for starters.

Women have been getting the short shrift this year, as none have yet got traction with whatever it took for Greta Gerwig to get so many critics to rally behind her, pretending they were changing anything for very long. Instead, once Marielle Heller and Can You Ever Forgive Me made a splash in Telluride it seemed like a broad conspiracy to keep her out of the race. Of course it wasn’t so deliberate, but it’s felt like a strange sort of negligence to watch critics award any woman but her, simply because Oscar bloggers gave her film such high praise coming out of Telluride. What a shame.

Other women with outstanding films this year include Debra Granik for Leave No Trace, Lynne Ramsay for You Were Never Really Here, Tamara Jenkins for Private Life, Chloe Zhao for The Rider. But there is apparently only room for one, honey, and not enough people could agree on which one should push through. So maybe none will. The more things change, the more they stay the same.

That is a potential scenario for how this all may go down. The directing branch is a wee bit less populist than the DGA but DGA always determines Best Picture.